James had his 5th swimming lesson today. Last week he refused to get off the step and trusted no one to hold him in the water. D was getting a little frustrated with him, but being patient. Monday, after his lesson in which he spent 15 minutes arguing with her, she asked if he disliked the water for some reason.

I explained that he loves the water and swimming and talks all day long about his swimming lessons and what he is going to do. It is just when he gets there, that suddenly he starts fussing. Soooo…..one of the guys decided he was going to practice with James and not take no for an answer.


James came over to me and P called him to come back into the water. Of course, James refused. P came out of the water, picked him up and took him back into the water. He told James that I would have to go upstairs if he continued to argue or yell. Wow, good idea. I could be upstairs in air conditioned comfort instead of sitting by the humid pool feeling my hair get curlier by the moment. However, James didn’t want me to leave, so calmed down and cooperated. P worked with him for another 20 minutes before he let James get out of the water.

Today, D decided to switch with P and let him do the lesson. Nope, James wasn’t having that – D was his instructor. So, she used the”Mom will have to leave if you yell or refuse to cooperate.” D spent twenty minutes working with him and then P decided he wanted to do 10 minutes with James. He did great! 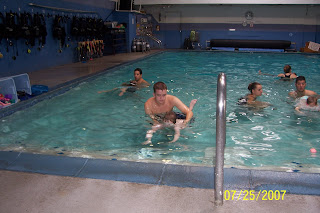 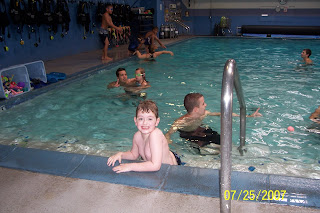 Unfortunately, Thursday he started complaining of a scratchy, sore throat, so we missed Friday's lesson.


So, we spent the afternoon doing something fun and educational too! I found the Geosafari Xcavations at the Brighter Child Homeschool store yesterday. 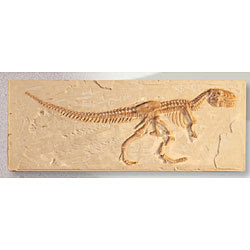 Using archaeological tools, you carefully chip, scrape, and brush away plaster to find a tyrannosaurus Rex "fossilized bones". It is very neat and will be a fun project.
at July 27, 2007