James and I asked Father to wake us up last night when the lunar eclipse started. He thought we were both crazy and didn't think we were serious. James sleeps very heavy and doesn't even wake up when the smoke alarm is blaring.

Father tried to stay up, but ended up coming to bed around 1:00. I told myself before going to bed, that I wanted to get up at 3:00. So, around 3:00 I woke up to go to the bathroom. My getting out of bed woke up Father. He asked if I was going out to look at the eclipse. Oh yeah! So, he went in to wake up James; who actually woke up, looked at us for a couple minutes blearily, then it registered. Lunar Eclipse. He hopped up and we all went outside. It was a beautiful night. I took a few pictures, but wasn't sure they were going to come out. I blearily looked through the viewfinder, tried to turn off the flash and set it to timer instead. Ended up taking a few pictures of the ground. I figured it out and aimed. My camera isn't the most powerful in the world, but did the job. 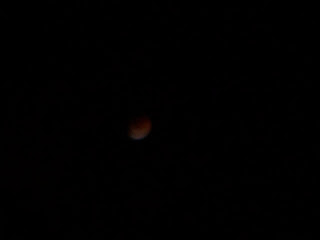 James went back to bed after a couple minutes. Father and I stayed out a little longer enjoying the night, the eclipse and the stars.
at August 28, 2007