In 1977, we moved to the small town of Warner Robins, Georgia when my father was put in charge of Air Force Reserve Recruiting for Robins AFB. I graduated from Warner Robins High School, the home of the Warner Robins Demons.

Yes, our mascot was: 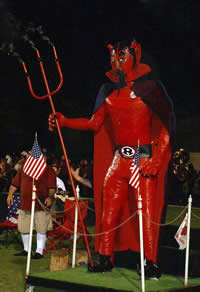 Our main rival was north side high school and their mascot was an eagle. The demons won the city, state, region and national championship in 1981. And even now, they are the Region a AAAAA All Sports Champion for 2006-2007.

I remember one evening, when I went with a couple girlfriends to infiltrate, ahem....check out Northside High school's senior hall during homecoming week. We wanted to to see what kind of posters they were putting up, etc. We walked slowly through the hall, until some of the students realized we were from the "other" school. We hightailed it out of there, before our car got egged in retaliation.

Warner Robins is a small town, but it has a big heart.

Congratulations, guys.... we are very proud of you!