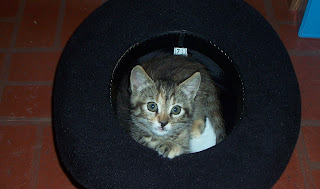 We have had Luna a couple weeks now. We are all adjusting to have a kitten in the house such as carefully shutting doors, cleaning small toys and crumbs off the floor immediately and getting up earlier (Yawn!) She can get into the narrowest of places, so we are "baby proofing" as we go. We have lost her twice. The first time, she crawled up into the shelf behind the drawer of the TV stand in the kitchen. Took a half hour to find her because she didn't answer to my calls until she woke up and discovered couldn't get back out. The 2nd time she was just sleeping in back of the couch.

James is discovering the art of gentleness. (hint: requires lots of training and supervision). 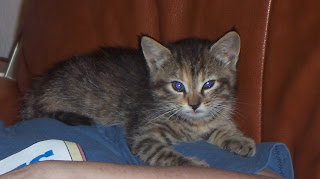 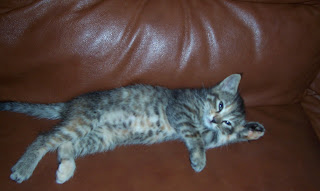 She hates to sleep alone and sleeps between Father and I, either by my shoulder or between our pillows. I get awakened in the morning by a soft paw brushing my neck and she wakes up Father by batting his nose. Hmmmm! We have managed to eliminate the middle of the night wake up calls and she lets us sleep at least until 7:00 now.

James is just itching to have her sleep with him, but he is such a restless sleeper, we will wait until Luna is older and bigger.