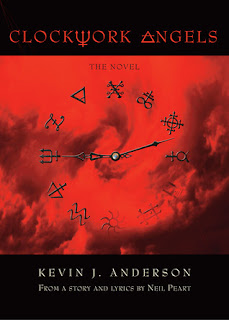 "So young man, what do you lack?"  is the question that started Owen on his hero's quest.  Little did he know the Anarchist and the Watchmaker had both set their sites on him and would try to influence every decision he made from there on out. But little did they realize Owen had a mind of his own and dreams that would take him on a odyssey of exploration until he found his place.

"What do I lack? What an annoying, ridiculous question! He bit back his answer, keeping the words to himself. He muttered in a low voice for his ears alone, since no one would understand anyway. “I lack freedom. All these people lack freedom. If a man has a perfect life but cannot make his own choices, then what good is that life?” Oh, they had their clothes and their comforts, their families, their pocketwatches and cheap gold, their smiles and their diamonds. But above all that, he would choose free will. They didn’t even know what it was."

Clockwork Angels is an intriguing steampunk story created by the collaboration between Kevin Anderson and Neil Peart. The story was influenced by the album and lyrics of the Rush's Clockwork Angels as well as Voltaire's Candide and other stories.

"The Watchmaker and the Anarchist had demanded that he choose between them, but Owen Hardy from Barrel Arbor—a mere assistant manager of an apple orchard, who had traveled so much, endured so much, seen so much since his modest beginnings—chose not to decide. That was the choice he made. That was his free will."