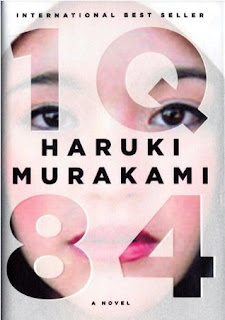 It's been exactly 10 years since I first read Haruki Murakami's 1Q84.  I remember loving it then. Now, I don't remember much at all. I didn't love it, but enjoyed the bizarre magical realism.  The story is about two characters who never get together until practically the end of the story.   Both characters, Tengo and Aomame are flawed, far from perfect, and find themselves in odd situations.

Aomame, stuck in a taxi on a gridlocked expressway,  climbs down the emergency escape ladder on the side of the expressway in order to get to an appointment in time.  Thus begins her journey into the surreal.

"1Q84 - That's what I'll call this new world... Q is for Question mark. A world that bears a question. Like it or not, I'm here now, in the year 1Q84.  The 1984 that I knew no longer exists.  It's 1Q84 now. The air has changed. The scene has changed. I have to adapt to this world with a question mark as soon as I can. Like an animal released into a new forest, in order to protect myself and survive, I have to learn the rules of this place and adapt myself to them."

Tengo is pulled into a scheme to rewrite a story written by a 17 year old girl about a girl, the death of a goat, and the 'little people,' and his life is forever altered.

Murakami has a tendency to have the characters repeat themselves over and over and over again, but with each reiteration, you're pulled in just a little bit deeper in to the weird life of the characters which is full of symbolism with cats, and crows, and owls, and death. It's full of  mystery and romance, with much to do about a cult, as well as a literary conundrum, in which Leoš Janáček Sinfonietta plays a big roll in the fusion of the alternate world.  It's bizarre, but a good bizarre to say the least, but well worth reading once or twice in your lifetime.