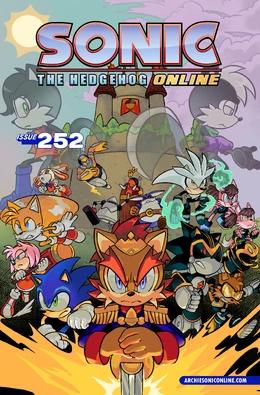 That's right, after a couple years, Archie Sonic Online finally reached issue 252. The folks there are incredible and talented people, Sonic fan projects have never been more greater than ever.

We're now in the final stretch of the King Naugus arc and things have hit their peak with the stakes higher than ever as a deranged Naugus has taken full possession of Geoffrey St. John and King Elias has no choice but to reveal himself and the Secret Freedom Fighters to all of the citizens of New Mobotropolis.

And so, what do I think of such a lovely fan comic issue?

I'll say, it's masterfully fantastic with good writing, really good writing on par with the writing of any officially licensed piece of media. My score for this one would have to be a ten, I could have given it a 9.5 or an 8, but it's too perfect to not grant a ten score to. Bravo, ASO. Bring on an epic finale, ya'll...