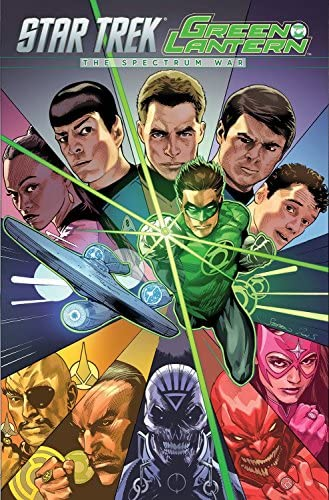 Greetings, fellow humans. I have returned with a crossover where no one in Star Trek has ever gone before, it is one of cosmic proportions, one of the green type. Its the Spectrum War, the first ever STAR TREK/GREEN LANTERN IDW/DC crossover event.

Just like with the Batman/TMNT graphic novels, I got this at my local comic shop and read this. Its amazing, I tell you. This crossover absolutely rocks and it works in nearly every way!!! The crew of the Enterprise, its allies and enemies and the Lanterns all play off of each other very well, the writing is just beautiful and the artwork is fine comic quality.

Heck, if Paramount and Warner wanted to collaborate on a crossover film, this comic should be turned into a movie. The first ever comic book sci-fi crossover movie, a DC/Star Trek crossover film should happen at some point since some Star Trek actors have appeared in comic book movies. For example, 2009 Star Trek's Chris Pine appears in the 2017 Wonder Woman as Steve Trevor.

As for the main villain of this one, he is one of the many comic book personifications of Death himself and is terrifying. He may not be Thanos or Darkseid, but this guy is terrifying. He destroyed Green Lantern Hal Jordan's universe and had the potential to destroy the Star Trek universe had the crew of the Enterprise and the Lanterns not stopped him in the end.

The end of the crossover was a nice touch, especially with Green Lantern becoming a leader in the Galactic Federation with him somewhat captaining the Enterprise instead of Captain Kirk, who is still a captain. You gotta love crossovers that end with both universes somewhat unified with one hero from the other world staying and being friends with the hero of the universe he's in. If there are any DC fans who like Star Trek and want to see a Star Trek/DC crossover, I would suggest this comic.

Star Trek/Green Lantern: Spectrum War gets a 9.5, such amazing work from IDW and DC. Farewell for now everybody.