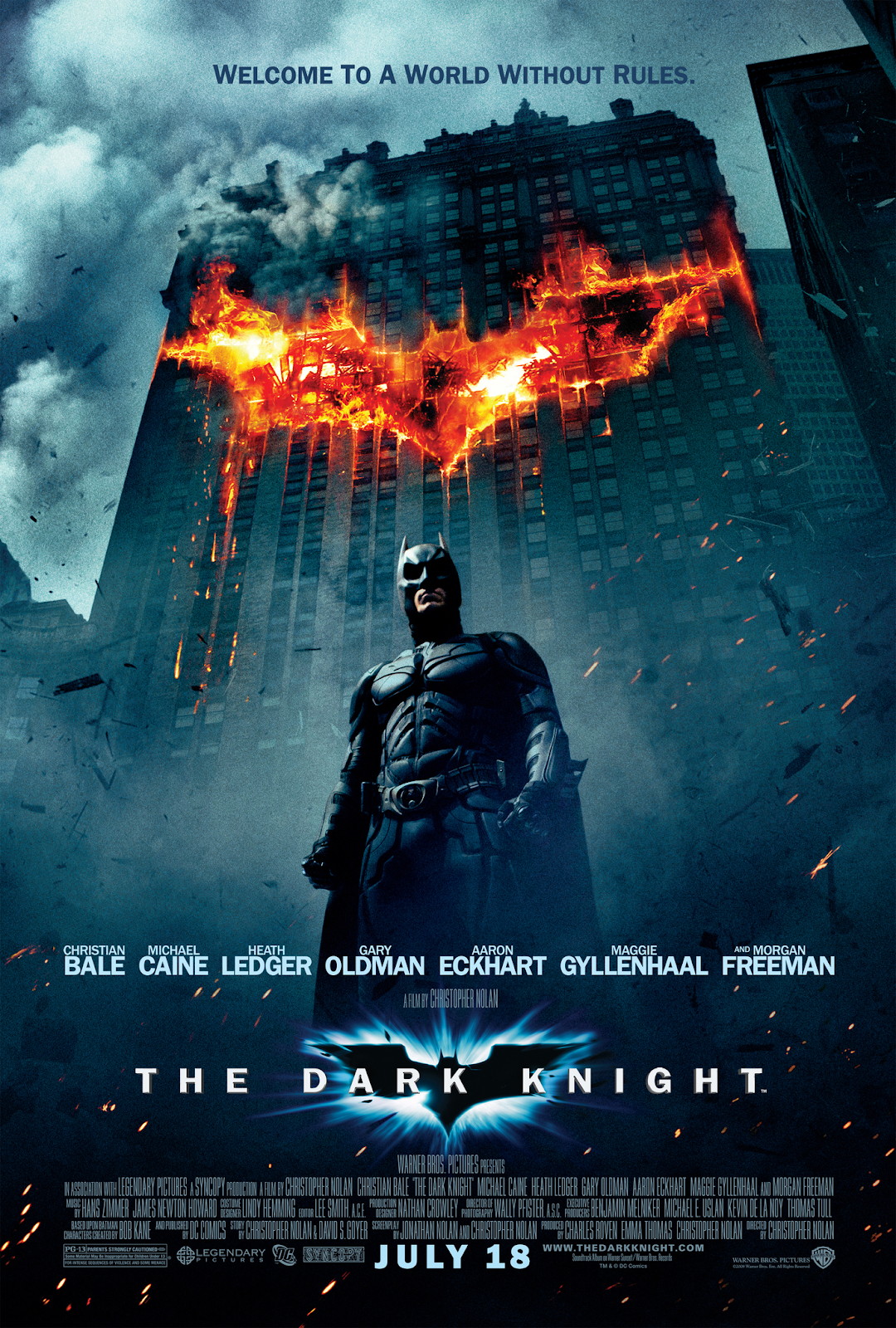 Hello, superhero fans of justice, welcome back. Its time for more Batman as we delve further into the Christopher Nolan trilogy with the 2008's hit superhero movie sequel to 2005's Batman Begins known as THE DARK KNIGHT.

That's right, we finally saw it and, wow, I can see why so many people love the life out of this film. Hats off to Mr. Nolan and his team and to the late Heath Ledger for all their hard work. THE DARK KNIGHT sees Batman going up against The Joker (played by Ledger) as he concocts a plan to corrupt and terrorize Gotham, which sees initially noble District Attorney Harvey Dent eventually become the villain Two-Face thanks to Joker's machinations.

And by the end of the film, while Joker and Two-Face are defeated, The Joker's plan to ruin and corrupt Gotham succeeded. And on top of that, while Batman continues to be a hero, he decides to let Harvey Dent take the credit for his heroics while the Dark Knight himself becomes a fugitive of justice with  Jim Gordon, who finally becomes Commissioner Gordon, destroying the Bat-signal.

If you're wondering what my honest thoughts on THE DARK KNIGHT are, I will tell you now. This movie is fantastic for its time and it deserves the honor of being a fan favorite. The musical score for this film is well scored, it is epic when it needs to be and gets scary when the suspenseful moments come in, especially with the Joker scenes.

Even the action scenes and special effects are perfect, nicely crafted and executed and beyond mind-blowing for today's standards, the writing and screenplay are through the roof and the actors brought a fantastic performance for this film with one of the big show-stealers nearly being Heath Ledger himself. And in his final film role as Batman's nemesis The Joker, he does one heck of a good job, my mother was creeped out and I laughed nervously when he delivered his sinister Joker laugh.

The Joker here is just as anyone would expect any version of The Joker to be, the sinister and intelligent nemesis of Batman with a plan to create chaos and anarchy in Gotham. The opening scene just shows how dangerous and unpredictable this guy is, he disguises himself as one of his goons and kills one of the henchmen during a bank robbery.

And if that wasn't enough, the scene where he meets with the Mob is perhaps one of the most intense and well-made scenes in any action or superhero film. Who can forget that laugh and The Joker walking in while saying "And I thought my jokes were bad", not to mention when he does a "magic trick" where Joker makes a pencil disappear by slamming a guy's head into it. Ouch! While Joker was a dark villain long before Heath Ledger played the role, this is undeniably one of the scariest villains ever.

Batman's conflict with The Joker is just as you'd expect it to be with the Dark Knight trying to stop him while the clown prince of crime does what he can to get under Batman's skin. During Batman's interrogation with the villain, we are reminded of the Batman/Joker dynamic made famous in the comics when Joker tells Batman he doesn't want to kill him as he completes him. We are later reminded of the dynamic during their final fight when Joker tells Batman they are destined to do this forever, but this is the only time in the trilogy that they will fight given Heath Ledger's unfortunate passing.

Minor disappointment regarding an actor's death aside, this film is beautiful. And so, with nothing else to say, I will give THE DARK KNIGHT a ten out of ten. This film has stood the tests of time since it released and you can see it with the quality of this iconic, unforgettable Batman film. It pushed the limits of the intensity and pushed the PG-13 rating to the max, THE DARK KNIGHT is so intense, its going to be some time before you hear that I watched THE DARK KNIGHT RISES.

May we meet again, everyone...