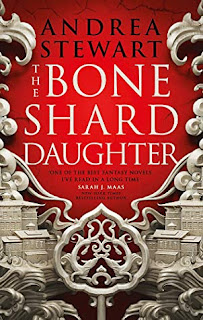 From the opening line - Father told me I'm broken - I was drawn into the world of Lin, the emperor's daughter,  Jovis, a smuggler, Phalue, the governor's daughter, her girlfriend Ranami, and a mysterious Sand with no memory.  Bone shards play a center role in the islands.   At the age of eight, children are gathered in the square of each village during the Tithing Festival to have a shard of bone removed from their skull.  Not all the children survive and parents used any means to smuggle their children away to safety.  The bone shards are used by the emperor to create and power constructs.  Magical creatures, made of different animal parts and used to spy on the citizens.  While the emperor and governor reside in palaces of gold, many of the citizens live in poverty, and a group of rebels work to undermine the governor and stop the tithing festivals.  It's the rich against the poor trope with the unique twist of the bone shards and constructs thrown in which makes for a unique and engaging story.  I highly recommend it. I'm looking forward to reading the second book in the Drowning Empire series, The Bone Shard Emperor.

Historical Fantasy, new to me author, 438