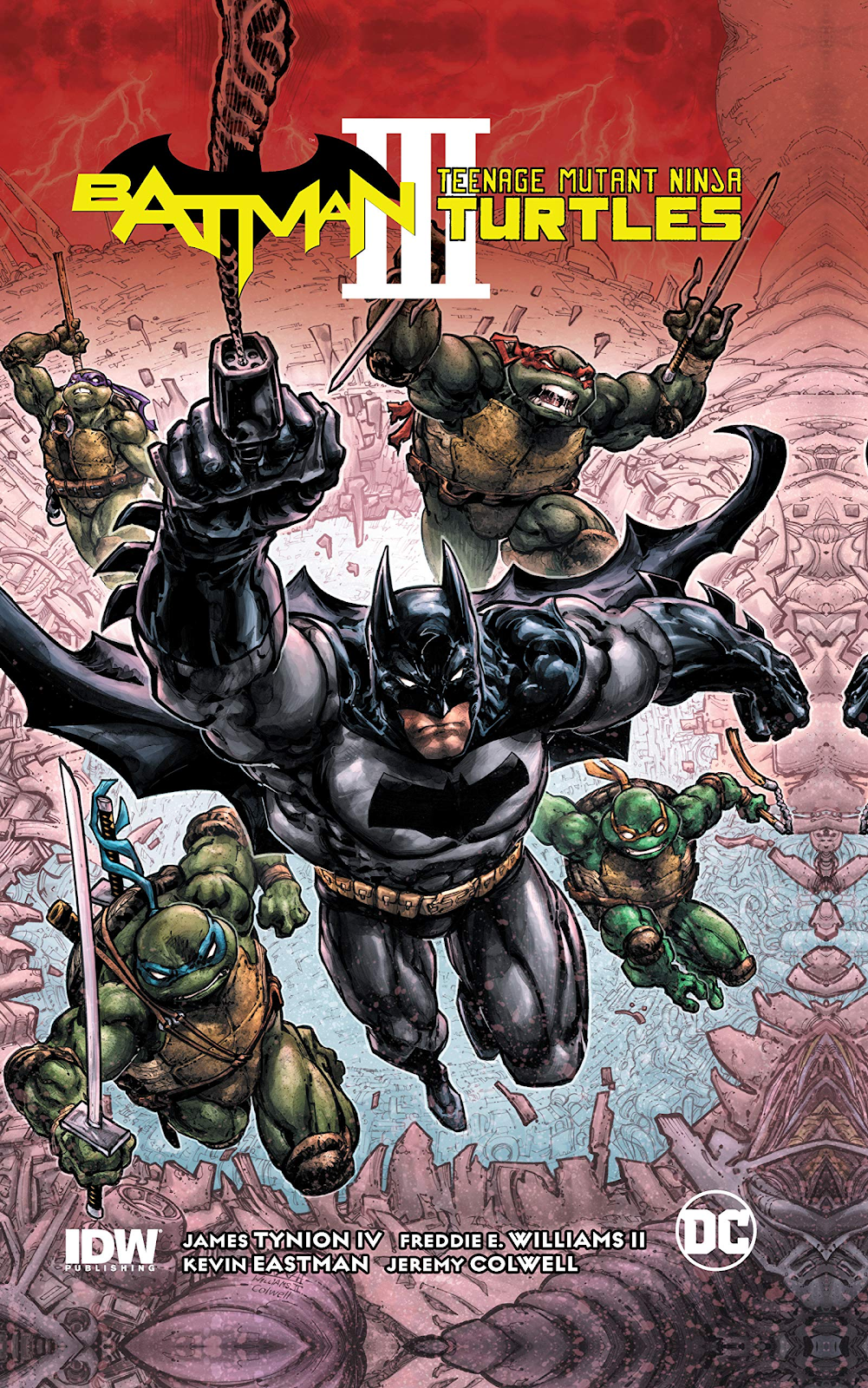 Greetings again, good DC friends and TMNT ninja nerds. We're back to review the third and final chapter in the Batman/Teenage Mutant Ninja Turtles crossover mega-event that's lasted more than two-three years. After seeing them battle Ra's Al Ghul and The Shredder in the first crossover and then go up against Bane in the second, what could end their crazy crossover crisis on infinite worlds in a half-shell with a bang?

That's right, its a Multiversal crisis and at the center of it all is the Turtle's fearsome alien nemesis and Shredder's ally, Krang. And this crisis all begins when we take a look into what seems to be an alternate Batman/TMNT hybrid universe where Batman grew up with the Turtles as Splinter's fifth adopted son. But its not all as it seems and it turns out Krang fused the universes together as part of a plan to conquer the multiverse.

Once the good guys encounter the Turtles' original counterparts from the Mirage universe along with Golden Age Batman from the original Batman universe, the set up for the battle that will determine the fate of the entire multiverse is set up and soon kicks into high gear. Let me tell ya now, the final battle between the heroes and the bad guys is unbelievably epic and nothing could top that aside from the final battle of the movie Avengers Endgame (which came out the same year).

The Batman/TMNT crossover trilogy overall is a wonderful masterpiece and should be read by those who are into Batman but haven't gotten into the TMNTs or visa versa. Each entry has some gorgeous visuals, amazing dialogue and real good writing along with amazing action segments with enough service to remind you why you fell in love with DC and TMNT in the first place.

Regarding how the Batman/TMNT crossover turned into a trilogy, its remarkable that the people at Warner, DC and Nickelodeon haven't made any sequels to the animated Batman/TMNT movie yet. Hopefully it'll happen down the line, you can't end a movie on a big stinger and not give it a sequel, that is just cheep. Regardless, the story of this crossover will blow the heck out of your mind.

As I bow out, I salute the writers who went all out with the big finale of this crossover and Batman/TMNT III gets a ten out of ten. May we get more good crossovers like this one someday in the future, now, its time to relax after a long journey. Until we meet again, good friends.