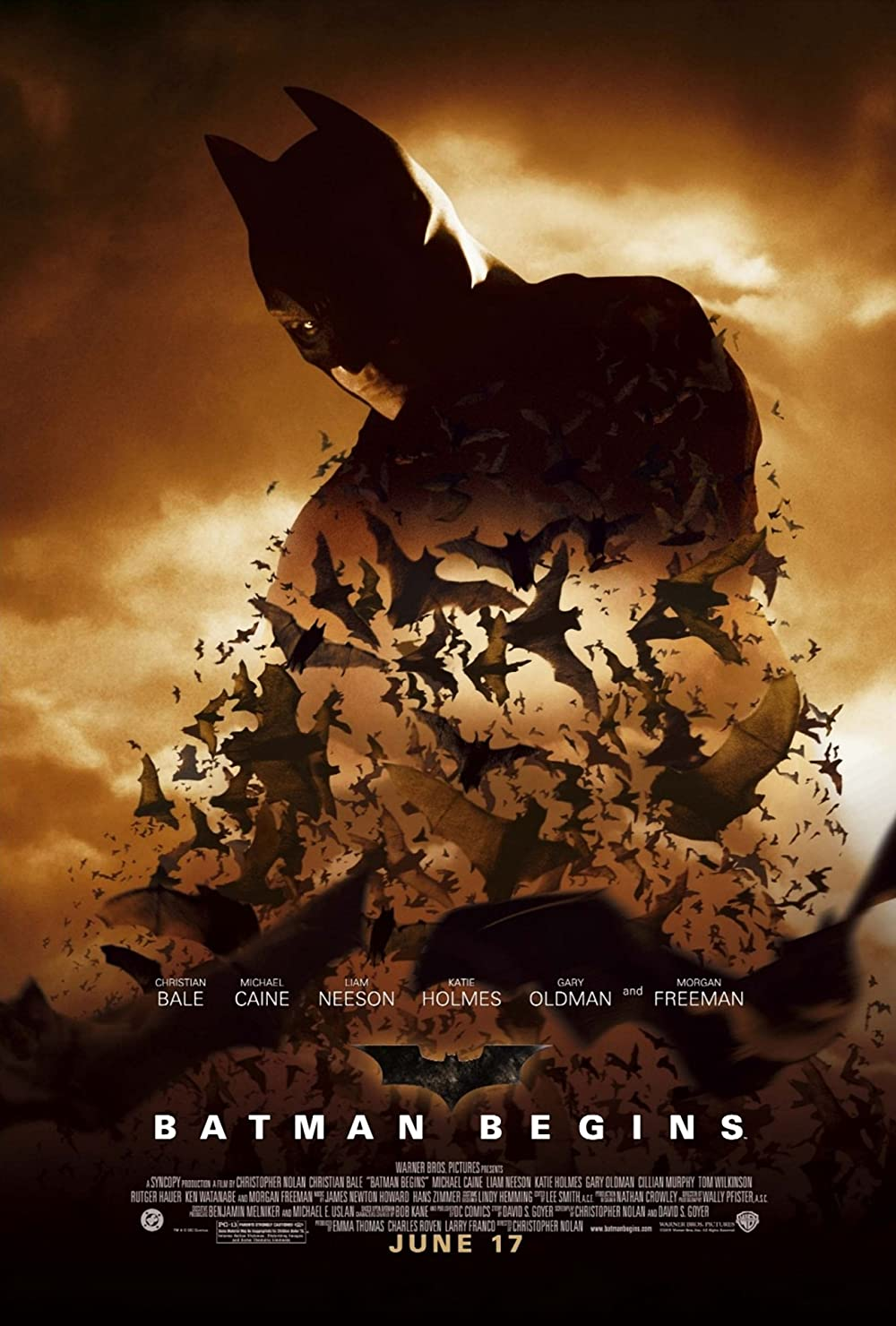 Greetings, Gotham dwellers and Bat-fans. The time has come, we are now about to delve into darkness again, to review the one that you all love. It is time for BATMAN BEGINS!

Starring Christian Bale as the titular Dark Knight, directed by Christopher Nolan and released in 2005 over eight years after the last big movie BATMAN & ROBIN, Batman Begins returns Batman to his dark, edgy and serious roots. Released at a time when superhero movies were on the rise in popularity following the release of hits like Sam Raimi's Spider-Man and before the famous Marvel Cinematic Universe got off the ground, BATMAN BEGINS showcases the traditional origin story of Bruce Wayne becoming Batman from the death of his parents to his transformation into the Dark Knight.

We saw this together after holding off for a long time, especially after getting it's sequel 2008's THE DARK KNIGHT on Blu-Ray, and let me tell you, it is mind-blowing. Batman Begins is what you'd expect from a film featuring the Dark Knight, its action-packed, serious and faithful to what the Dark Knight always was. Forget the campy 60s or the mid to late 90s films attempting to replicate that time, Batman is meant to be serious and dark while making sure its accessible to families and kids.

Bruce's butler Alfred is played by the remarkable and well-talented British actor Michael Caine, who captures the spirit of the Wayne family butler perfectly and is one of the film's finest highlights. The main villain of the movie is Ra's Al Ghul, who mentors Bruce at the start and is played by the legend himself Liam Neeson, who previously played Obi Wan Kenobi's Jedi mentor Qui-Gon Jinn in 1999's Star Wars Episode 1 The Phantom Menace.

Liam portrays Ra's excellently and every scene he is in is handled decently, especially when you don't know who he truly is when he comes off as a man named Henri Ducard while it seems the real Ra's Al Ghul is played by Japanese actor Ken Watanabe. But once you find out that its actually Ra's and the other guy was all a decoy, you are surprised. However, I already knew this, having done my research and watched some videos about this.

In regards to the rest of the cast, the role of Commissioner Gordon, one of Batman's best allies, is portrayed by the great Gary Oldman of Harry Potter fame. Gary is such a treat in whatever movie he is it, be it in the 90s Lost in Space or the aforementioned Harry Potter films, he was a perfect pick for Batman's well-trusted ally. Even Bruce's parents were nicely casted, the actors playing them captured that kind parental spirit and their death scene was quite decently crafted.

BATMAN BEGINS is an amazing, fun ride from beginning to end with no roadblocks to ruin the experience, the movie is one of the best superhero comic book movies to have ever come out years ago and you will not want to miss it. I love it and so did my parents, my final score for BATMAN BEGINS is a flawless nine point five out of ten. Thank you for joining us today, I'll see you later.