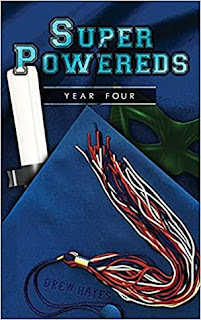 Wonderful installment and the finale to the series. Many answers to all the questions throughout the books. The kids learned so much the final year through their battles and the intramurals, learning to trust themselves and their powers, culminating in the final battle between the Heroes and bad guys. Did you notice we never found out which ten graduated? Grateful for the epilogue ten years later giving an update on all the characters. I may write a more indepth review at a later time about the whole series. Right now my brain is full and I have a book hangover.  This is one series I know I'll  read over and over again.