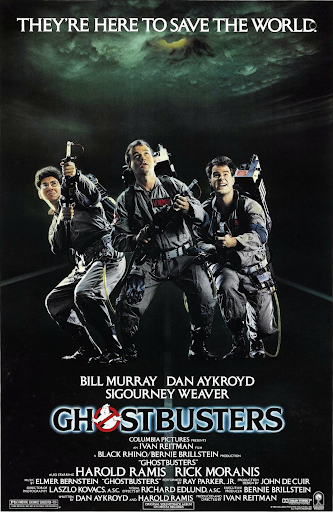 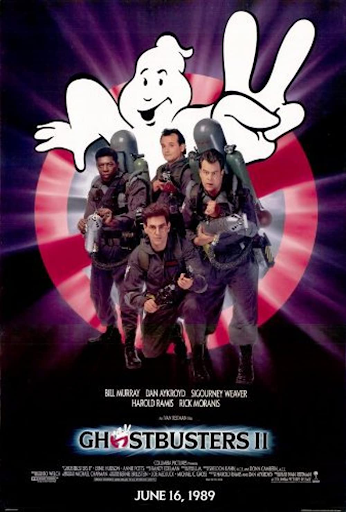 Greetings, supernatural nerds, we're diving into another movie review. But this one is a double feature, its the first Ghostbusters movie from 1984 and its 1989 sequel both starring Bill Murray, Rick Moranis, Dan Aykroyd and Alien's Sigourney Weaver. Both were well-received movies and went on to become pop-culture products of their era, spanning a franchise consisting of a couple video games and various comic books as well as a cartoon show.

So, what's the story of all two films here?

In the first film, after Peter Venkmen, Egon Spangler and Ray Stanz investigate a ghostly phenomenon in a library in New York, they go into a supernatural investigation and ghost catching buisness calling themselves the Ghostbusters. As more spooky situations start popping up, its soon discovered that an ancient god called Gozer is coming to destroy the world so its up to the Ghostbusters to stop him.

And in the second movie, after going out of buisness following the battle with Gozer in the first film, the Ghostbusters have to get back together when pink slime is discovered under New York and they catch wind that a dead evil dictator named Vigo the Carpathian is planning to return from the dead and take possession of Daina Barret's baby son Oscar on New Year's.

Now that the plots are out of the way, what do people like me think of Ghostbusters?

Overall, they're nothing short of decent, comedic and almost serious 1980s movie fun. The producers knew what stories they were aiming to tell and the actors helped tell the story perfectly. The Stay-Puff Marshmallow Man, Gozer's pre-chosen form by Ray, in the first film went on to become an icon in pop culture and is somewhat of a meme now and then.

The tone of both movies manages to find a perfect balance between light-hearted comedic storytelling and when to get serious, especially with the big villains of the first and second films respectively. In regards to the cast of the movies, Bill Murray is perhaps one of the greatest out of the entire Ghostbusters cast, even Sigourney is a treasure to see, especially for those who are fans of her work.

I don't have anything else to say, not only is there great acting and good storytelling in these movies, but the musical score is well done and there are some great special effects as well. These movies deserve the love they got, if anybody out there hasn't seen it, go see it. You do not want to miss out on some fun 1980s classics, especially when it comes to supernatural comedy films like Ghostbusters.

Ghostbusters I gets an 9.5 out of 10 and Ghostbusters II gets a 9.9/10. These movies are so loved and the franchise is so popular, a third film was finally launched after languishing in development heck for years while an all-female reboot in 2016 was released, but we'll save that one for another day.

Now, I bid you farewell. See you in the next movie review...