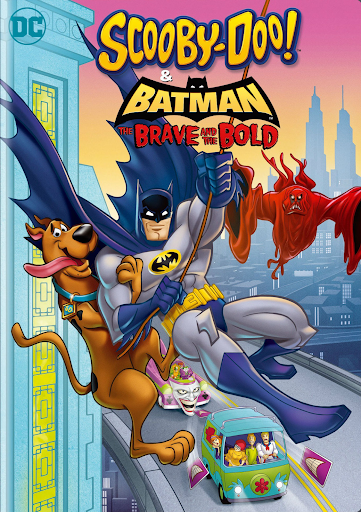 Greetings, fellow nerds. I'm back... with another crossover movie.

Its SCOOBY DOO AND BATMAN... The Brave & The Bold.

So, what's this film about?

First, this is NOT the first time the Scooby gang and Batman have crossed paths. They met for the first time in an episode of the 1970s New Scooby Doo Movies where they teamed up to take on The Joker and Penguin together. Since then, they've occasionally met and its made a lot easier thanks to Warner Bros owning both the rights to Scooby Doo and the DC material.

Second, you're in for a wacky Dark Knight ride.

Now lets do a summary, shall we?

When an entity known as the Crimson Cloak starts causing trouble, Mystery Inc must team up with Batman and his own band of mystery solvers to take on this mysterious villain.

Along the way, they find themselves dealing with the likes of The Riddler, who's involved with the plot, and many other villains. In the end, they defeat the Crimson Cloak, thwart Riddler's plan and rescue a scientist named Leo from another dimension.

My thoughts on this movie, its mildly good, nothing but fun and irresistible action with wacky hijinks that you can expect if you see something like this. The voice actors behind Batman, his friends and the gang appear to be having a lot of fun doing this, even the voices for the villains were enjoying themselves. Perhaps one of my favorite parts of this movie aside from the ending is the Arkham Asylum scene where Shaggy and Scooby find themselves facing Harley Quinn and Poison Ivy.

I've been into Scooby-Doo for years and I basically grew up a Scooby fan despite moving on from it for a time until I saw the live-action movie in 2015. As for my relationship with Batman, again, I only played the LEGO games and saw a few LEGO films involving Batman. It wouldn't be until years later that I began to fully understand everything about both superhero genres of DC and Marvel.

Now, seeing this. The people at Warner care about the fans so much, they basically made this just for them. Its almost like a dream come true for Bat fans and Scooby fans.

There's almost nothing else to say, the quality doesn't cease to amaze and this film is so unforgettable. It is my honor to give this a 9.5 out of ten, let us hope this movie ages well...

Well, goodbye for now, my friends.