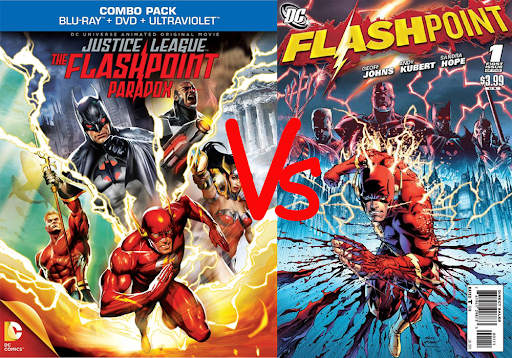 While I was visiting the local comic book store many suns and moons ago, I had the time to purchase the DC graphic novel containing all the issues in the storyline known as Flashpoint by DC Comics. After that, I read the entire comic and it was a treasure to read. The comic was nicely constructed and the storyline was well written and is respectable, the folks at DC gave us quite the deep story.

Then, just recently (as of this), I had the time to watch the Justice League: Flashpoint Paradox movie and it is incredible. So, what's Flashpoint about?

Its story's simple really: The Flash aka Barry Allen travels through time via the Speed Force and tries to stop his mother's death, but his actions cause history to change, leading to an alternate timeline where Bruce Wayne dies as a boy and his father Thomas becomes Batman, Kal El/Superman's Kryptonian ship crashes in Metropolis and destroys the city and the world is torn apart by a war between Atlantis and the Amazons of Themyscira led by Aquaman and Wonder Woman respectively.

Once The Flash realizes what's going on, he teams up with Bat Thomas/Thomas Wayne as Batman to defeat his nemesis Reverse Flash/Professor Zoom, stop the war and fix the timeline. After Professor Zoom is killed by Batman while battling Flash, The Flash breaks the time barrier and manages to stop himself from saving his mother, restoring the timeline but creating the new 52 Universe in the process.

Now that you know the story, what is the consensus around it?

Well, its a very good story. It may be dark, but it is nothing that anybody can't handle. If you're a fan of sci-fi and superheroes, this is for you. If you're familiar with Flash, Batman and the rest of the DC universe, you're in for a big ride.

The Flashpoint storyline took place in 2011 and has gone on to become an iconic story since then. Two years later, the people at Warner Bros put together an animated movie adaptation known as Justice League: The Flashpoint Paradox. The movie follows the storyline of the comic but also takes creative liberties with how the story is presented, even the way Thomas Wayne Batman kills Professor Zoom is different from how it was originally presented.

In the comic, Batman stabs Professor Zoom with a spear (I think) and, in the movie, he straight up shoots him in the head while he's taunting Flash. Either way, this version of Batman did help save the world (and the universe) since The Flash had trouble battling Professor Zoom due to him siphoning off Flash's Speed Force.

I saw the movie very recently and its quite good, I suggest that you watch it. But just a heads up, the movie is rated PG-13. By that, I mean HARD PG-13. The movie pushes the rating with the action, especially when blood is shown.

That's right, the movie has blood in it.

But thankfully, its not too bad and its not like super R rated gore with guts and brains spilling everywhere. However, it doesn't change the fact that the way Thomas kills Reverse Flash is, of course, brutal. We hear the gunshot and see Reverse Flash standing with shock, his eyes wide as blood trickles down his face and we see Batman with the gun through the hole in Zoom's head before the Anti-Flash drops dead.

Ignoring all that, Flashpoint and Flashpoint Paradox are fun stories worth reading and seeing for any DC fan or any Superhero fan in general. I give the comic an 8 and the movie gets a 9.5.

Assuming you all have time, find a copy of the Flashpoint graphic novel and, if you have an HBO subscription and you find the Flashpoint movie on there, watch it. You will be in for a fun ride and you will not be left feeling bitter disappointment or grief. That is all I have to say today, so be safe out there.