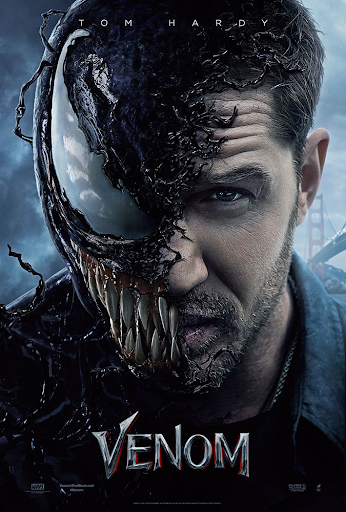 That's right, Spider-Man's dark symbiote counterpart has his own movie... starring TOM HARDY! Up until 2017/2018, this movie had been in development hell for years, goin' all the way back to 1997 back when the character of Venom had gotten off the ground. But years later and well-after Venom's theatrical debut in Sam Rami's Spider Man 3, Venom the movie finally happened and its intense, its rated PG-13 and ITS A SUPER GOOD MOVIE!

So what is the story?

A manned space probe for the Life Foundation, run by the film's main villain Carlton Drake, discovers symbiotes on an asteroid amidst a space mission, a symbiote gets on board and the space craft crash lands back on Earth in Malaysia. The symbiote responsible for the crash escapes in a human female body before the Life Foundation successfully recovers the other symbiotes.

In San Francisco, Eddie Brock works as a reporter for the Eddie Brock Show and is engaged to Lawyer Anne Weying. One night, while Anne is sleeping, he goes onto her computer and discovers Anne is preparing for a court case involving the Life Foundation, which Eddie is about to visit to interview Carlton himself. The next day, when Eddie interviews Carlton, he asks about the deaths the Life Foundation is covering up. Carlton dismisses Eddie and has him fired which leads to Anne breaking up with Eddie.

Carlton and his crew begin experimenting with the symbiotes.  Several volunteers including one named Isaac are killed after bonding with a symbiote. A Life Foundation doctor meets with Eddie in San Francisco and tells him he was right to accuse Carlton. Eddie sneaks into the Life Foundation, releases one of the symbiote host subjects from a cell and the symbiote attaches itself to Eddie.

The Life Foundation pursues Eddie, who escapes and flees back to his apartment. Shortly after, he starts eating a lot of food and throws up in the toilet at one point, while brushing his teeth, Eddie is shocked to hear a gruff voice inside his head telling him to do things. While walking the streets of San Francisco, Eddie goes right to a restaurant where Anne is with her new boyfriend and begins eating lobsters there.

Anne takes Eddie to an MRI with her boyfriend Doctor Dan Lewis and they scan him, but the scan causes a negative reaction in Eddie and he goes home again. Back at his apartment, Eddie receives a phone call from Anne and Lewis, who tell him he may have a parasite. The Life Foundation's henchmen arrive and Eddie fights them, using the symbiote's strength before escaping.

Carlton, who learns a symbiote has bonded with Eddie, sends his men after him. Eddie sees the symbiote in a reflection on a car window. He tries to escape on a motorcycle when a drone attacks and chases him through the streets of San Francisco which ends with Eddie being rammed and throw off the motorcycle.

Just when it seems Eddie is at the mercy of the Life Foundation, the symbiote takes over his body and grabs one of the goons. He reveals himself and says, "Eyes, lungs, pancreas... So many snacks, so little time..." Then the symbiote bites off the head of a man and flees with Eddie to a pier where the symbiote introduces itself as Venom and says Eddie is his.

"You did not find us, Eddie. We found you." Venom says, telling him that he's inside his head and Eddie is a loser. The symbiote then makes sure to tell Eddie he needs Carlton Jake's rocket and, if he cooperates, Eddie may just survive.

"That is the deal." Venom tells Eddie.

Eddie heads to his old boss Jack's office (from when he did the Eddie Brock show) to try and show him evidence against the Life Foundation. On his way out, Eddie runs into a SWAT Team and Venom takes them down before Anne shows up. While at the doctor's office at the San Francisco hospital, the doctor puts Eddie in a room and uses loud sounds to drive Venom out of the body.

As Eddie is leaving, he is captured by Carlton Drake's men and taken to the Life Foundation where he finds out Carlton has bonded with a symbiote named Riot, whom Venom later describes as a team leader. Venom bonds with Anne and they go to save Eddie right as he's about to be executed by Carlton's men, Anne and Eddie kiss, leading to Venom re-bonding with Eddie.

Venom tells Eddie about Riot and what is going on before declaring he likes it on Earth and that Eddie convinced him to stay. They see Riot heading to the rocket and Venom tells Eddie that Riot has got "shit that you've never seen", indicating that Riot is very powerful.

Side Note: When I watched Venom on one of the DVR channels, they replaced the "oh f*** it" with "well" and had Eddie say, "Well, lets go save the planet."

Venom confronts Riot and the two engage in a battle that leads to the rocket, involving them ripping at each other and Riot taking Venom from Eddie at one point, even Carlton stabs Eddie by the edge of a platform and Eddie is saved by Venom before he dies. The battle ends with Venom destroying the rocket by cutting open the fuel cells, leading to a fiery explosion that kills Riot along with Carlton. Eddie seemingly loses Venom, but it turns out Venom survived.

Weeks later, Eddie talks with Anne about what happened and they part ways with Eddie walking down to Mrs. Chen's convenience store to find some food for Venom. A robber comes in to steal money from Mrs. Chen and Venom deals with the villain, threatening him at first and then proceeds to bite his head off right in front of a shocked Mrs. Chen, who asks Eddie what that was.

"I have a parasite..." Eddie says and bids Mrs. Chen good night before leaving, Venom angrily berates Eddie for calling him a parasite and Eddie eventually apologizes before asking what he'd like to do with Venom saying they can do whatever they want as the film ends.

A post-credits scene shows Eddie heading to a prison to interview Cleatus Cassidy, played by Woody Harrelson (who played Tobias Becket in Solo A Star Wars Story, which also came out the same year as Venom). Cleatus foreshadows the next movie as he says to Eddie that when he gets out of there, "there's gonna be carnage" and the scene ends with Cleatus's evil smile.

This is a movie worth watching, Venom is a nicely-paced action movie that handles the constraints of a PG-13 rating and pushes it now and then without going overboard into R-rating territory.

And despite mixed reviews, Venom was a box office success and went on to earn a sequel, also rated PG-13. Tom Hardy was a good casting choice as Eddie and the special effects look decent. Venom himself doesn't look so bad either. The people behind this project really took their time and the movie does not feel like a soulless cash grab as some people say it is.

My mother was reluctant to see this film at first, thinking it looked stupid and super violent. But eventually, I got her to see it and VENOM got a good couple of laughs out of her, especially the scene where Venom called Eddie a pussy and the scene when he threatened the robber to make him an armless, headless and legless thing "like a turd in the wind". You may as well say, in her eyes, Venom is basically a comedy action movie and we all love comedy action films, don't we?

Venom 2018 gets a 9/10.  It was fun and worth watching multiple times and shows how great a Marvel movie can be, even if isn't set in the Marvel Cinematic Universe. See you next time in Venom: Let There Be Carnage, true believers!