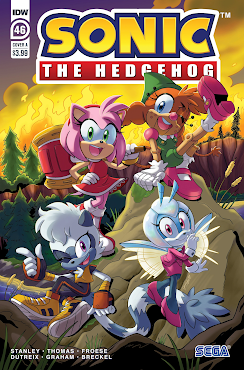 Part 2 of Trial By Fire, the road to issue 50 nears the midway point as year 4 of IDW Sonic slowly draws to a close.

Picking up from where part 1 left off, Bell reactivates following her encounter with a Moto Bug as a forest fire unfolds and we get a tease for Imposter Syndrome when Surge and Kit make a short appearance in the shadows.

Amy, Tangle and Jewel get to work on protecting as much people as they possibly can and Tangle eventually finds Belle before they find the camp ranger's son and his Wisp. The issue ends with a very literal cliffhanger, with the heroes falling down a cliff.

This issue was entertaining and Evan's storytelling gets more fantastical as time passes, she knows what she is doing and she has ran into zero roadblocks. IDW Sonic's stories have come a long way since year 1, they're no longer bound to the game Sonic Forces as they've become their own thing.

May nothing ever bog down IDW, may they keep going a bit longer. Sonic's 30th anniversary has been full of great content, despite the odds stacked against SEGA and their partners. Lets hope the finale to this three parter is satisfying. Cheers! 9/10 for greatness, no flaws whatsoever.