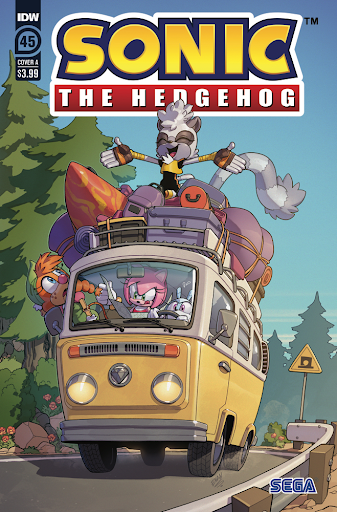 The road to issue 50 is upon us as a story arc looms and Evan Stanley is back in the writer's seat after Ian Flynn's fantastical Zeti Hunt saga. But this time, we're getting a girls' night out three parter with Amy Rose, Tangle the Lemur, Jewel the Beetle and Belle the Tinkerer. The girls do deserve a break, but trouble's not far behind in the form of a late night forest fire.

Evan does a masterful job on Ian Flynn's level, even though she's no Ian but is still a good writer. IDW's Sonic comic is proving to be just as entertaining as every other form of Sonic media from over the years, the stories are great and the characters are almost on point with nothing to hold them down.

It was also nice to see Amy's Tarot Card abilities be brought up, along with the fact they led her to Sonic in Sonic CD. Hey, that's a Classic Sonic nod, this indicates SEGA is starting to reconsider the Classic-Modern split and has begun to ease up on their strict rules. The future of Sonic is looking brighter with more greatness to come, the end of the issue was very suspenseful too, even the scenes serving as the calm before the storm were the best too.

My ideal score for issue 45 is an 8/10, this was fantastic, nothing can ruin the comic now.