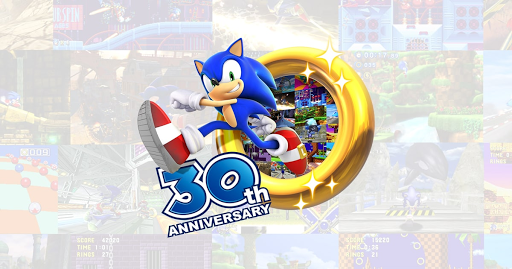 Aloha, Sonic Fans. It is I, CVGWJames, and we're back.

Today's a special day, folks. Why? IT'S SONIC'S 30TH BIRTHDAY, TRA LA LAAAAAAAAAH! That's right, everybody. It's been thirty years since our favorite blue hedgehog was born into the media universe and made his way into our hearts. Since his first game, Sonic has become very popular and, after so much trial and error, he's still as popular as ever. Thanks to the success of the Sonic movie, the hedgehog's popularity has grown higher than it has since it started to decline in the late 1990s.

I will never forget when I learned about Sonic's existance, around that time, I was only into Mario and LEGO. But eventually, I got my hands on a Sonic game i.e. Sonic Colors and the rest is history. I've played several Sonic games, watched almost all of the cartoons, read the comics and wrote numerous Sonic fanfics as well as done a boatload of Sonic fan art. The gosh darn beloved blue hedgehog has made such an impact on so many lives and inspired so many people around the world.

To think that, back in 1991, the thought of Sonic possibly making it to 2021 was unthinkable. C'mon, he'd just started. And back in 1999, if someone from the future told you that Sonic would be getting a movie that would make him more popular than ever in 2020, you'd probably be shocked. But, history is history, this is almost as real as a businessman running for president. So, speaking of Sonic comics, lets see how the current Sonic comic publisher, IDW, handles Sonic's 30th anniversary... 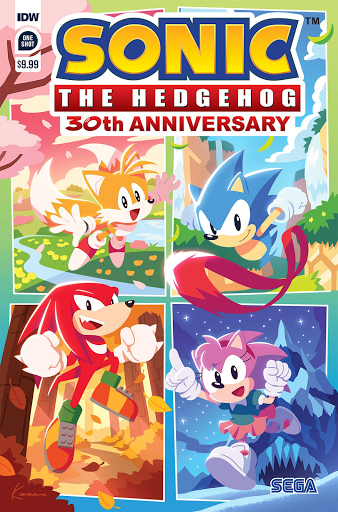 By releasing a special comic that involves CLASSIC SONIC, that's right, we're getting a special comic set in the Classic era. As you probably know, the main comic is set in the Modern era and SEGA has some restrictions in place against IDW using classic characters in the comic. But, by popular demand, there is a way to see classic content in IDW, IN A COMIC SET IN THE CLASSIC SONIC TIMELINE with not one, BUT THREE STORIES!

The first story "Seasons of Chaos" is written by Ian Flynn himself and sees Sonic and crew journeying through various zones based on the four seasons as they try to prevent the bad guys from getting all the Chaos Emeralds. It features the likes of not just Sonic, Eggman, Tails, Amy, Knuckles and Metal Sonic, but the return of Mighty, Ray, Tails Doll, Bean, Bark, Nack, the Heavy King and Metal Knuckles. All of whom have not been seen since either Sonic the Fighters and Sonic R as well as Mania or Archie Sonic.

When Ian Flynn talked about pitching SEASONS OF CHAOS, he sounded very excited. C'mon, he misses writing most of the characters who show up in the story. I will say, I was impressed by the writing of this and it was a very entertaining read. Ian knows how to write Sonic, now if only SEGA was willing to make certain characters like Mighty and Ray more than classic-exclusive characters. Anyways, let's talk about the other stories...

"Sonic Learns To Drive" is a fun one, especially since it introduces a new character and sees Sonic learning how to drive. At the end of the story, he kinda gets the hang of driving right as he learns that Eggman is attacking. This one is written not by Ian Flynn, but by four new writers. Can't name them all, but they seemed to be very passionate about Sonic.

Finally, we have "Doctor Eggman's Birthday", a harmless little tale about Eggman on his birthday. This one, like the last two, is set in the Classic Sonic timeframe. This one was written by Gale Galligan, who seems to be pretty good. Now that I've talked about ALL three stories, what do I think of this comic?

It's pretty good, very well-made. SEGA was very generous again and Classic Sonic is quite good, as long as the higher-ups focus on the current incarnation of Sonic and not shoehorn Classic into the modern era, which has annoyed the heck out of the fans to an extent. Happy 30th birthday, Sonic. May your days always be as special as your fans' days, to 30 more years and beyond...