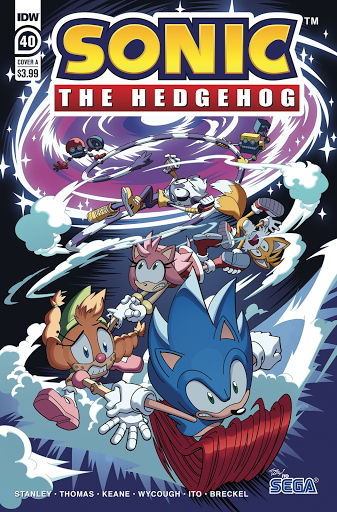 Welcome back, folks. IDW Sonic the Hedgehog issue 40 is here and, along with it, the finale to Evan Stanley's Test Run story arc. The momentum did not stop as it accelerated all the way to the end, the action was great and the finale was perfect. Plus, at long last, we have answers regarding Belle. Prepare for spoilers people, Bell the Tinkerer was created by... DOCTOR EGGMAN, when he was Mr. Tinker.

That's right Eggman's Mr. Tinker legacy lives on through Belle as she will be helping Sonic and friends fight the evil version of her father from here on out. However, you gotta feel sorry for Belle after learning the terrible truth about her own creator, but at least Eggman didn't install some sort of evil software program inside Belle's mind that could make her join her father's empire any time.

With "Test Run" over, what did I think of it? It was creative, flawless storytelling, Evan and the writing team did an excellent job. It's nice that SEGA is permitting creative freedom in some form, especially since this is a Sonic comic based on the video games. Besides, having the comic be strictly in-line with the game universe would hamper/stifle creativity to no end.

IDW Sonic gets better and better with each new release and continues to make new fans and longtime fans very happy as long as the writing is not childish and the Sonic characters are the characters, however, we must keep in mind that IDW Sonic is 40 issues into its run and its been 3 years since it started. The comic is walking, it has to walk before it starts to run and goes all out with anything.

Get ready, fans. The next issue will see the return of Ian Flynn and the beginning of a new arc that involves the Deadly Six, Zeti Hunt should be fun and the preview for part one confirms that the story will be flat out fun from the beginning. Anyways, see you all later. 10/10 for this story.