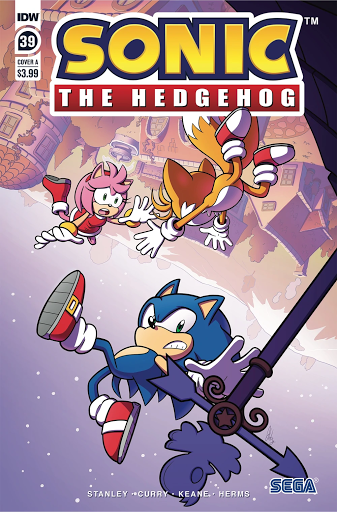 Fellow Sonic fans and good friends of mine, THE THIRTY-NINTH ISSUE OF IDW SONIC IS HERE and we are nearing the end of TEST RUN! TRA-LA-LAAAAAAAAAAAAAAH!

Everything has gotten more juicy, Tangle and Belle have busted Orbot and Cubot and they're now about to rescue Sonic, Amy and Tails, who've just broken out of that house they ended up in during the previous issue and are now face to face with an old enemy from the Dreamcast era: THE EGG VIPER!

However, there's more to the new Egg Viper battle than meets the eye. This time, Sonic's not fighting one Egg Viper, HE'S FIGHTING MULTIPLE EGG VIPERS! And this time, he's got backup from Amy and Tails, both of whom were elsewhere when Sonic fought the last Egg Viper. Tails had just saved Station Square and Amy was trying to help a blue bird find its family.

Oh, and Eggman's not actually in the pilot seat of any of the Egg Vipers, he's using VR tech that apparently looks like freaking scrapped SEGA VR tech. Dang, Eggman. That's new.

I have to salute Evan Stanley, she does a great job with this issue and the characters are on point, seeing her recreate and update the Egg Viper battle is also a welcome surprise. I wonder what other surprises that she has in store, oh yeah, there's about two cute SonAmy moments in the issue.

We have one issue left in this arc and the IDW team's going all out with nothing to stop them, even if they're working within any SEGA guidelines put in place, but thats a different story for another time. IDW Sonic the Hedgehog #39 gets a big 9.5/10, IDW Sonic's momentum is building higher and higher with each passing issue, all thanks to great writing and good teamwork between IDW and SEGA.