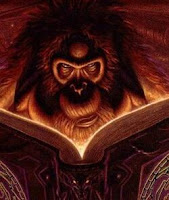 It's book week 9 in our 52 Books quest and March's fictional librarian is Dr. Horace Worblehat from Terry Pratchett's Discworld

Reads in progress: The Count of Monte Cristo and learning a few new words.  Pratchett's The Colour of Magic which is weirdish but kind of reminds of Xanth series and having to learn a whole new world and cast of characters.   Karen Marie Moning's Kingdom of Shadow and Light which is very good and putting everyone to the test.