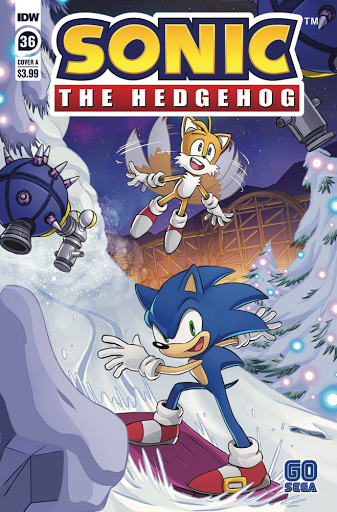 Happy 2021 Sonic fans, the newest issue of IDW Sonic is out and the first storyline of Evan Stanley's run as main writer for the series has wrapped up and a lingering plot point from the Metal Virus saga has been resolved: Fixing Omega.

Evan did a great job with this storyline and she's pretty good with the characters, especially with Shadow. Yes, Shadow the Hedgehog's characterization has improved for the most part, its not entirely there yet but its still a long way to go until he fully changes. Evan did her best.

Starline being the bad guy was interesting and he sure was a force to be reckoned with, outside of Eggman's employ, the doc knows how to be a villain. Will we see Starline again? Of course we will, will we get more of Shadow in the future? Of course, and yes, Shadow may improve more.

And so Year 3 of IDW Sonic ends as Year 4 begins and just in time for Sonic's 30th anniversary, what's in store for the comic with the 30th anniversary of the blue blur around the corner? Who knows, we just have to wait and see. May SEGA and their collaborators continue to impress us.

I look forward to the future of IDW Sonic and I have my hopes for what's to come with the characters, especially with Shadow. I'm so happy SEGA and Sonic Team are realizing, "Hey, we're making mistakes with this character, fans don't like it."

My score for this issue is a 10/10, a solid finale to a fine four part story arc. We sure do need a nice breather after the madness of the Metal Virus saga. Lets hope we get more awesome breather episodes and not dive into any crazy story arcs for a good long while.

May 2021 be the best year for Sonic in comics and the whole franchise.

Note: Sorry if the review was short, but I'm good.