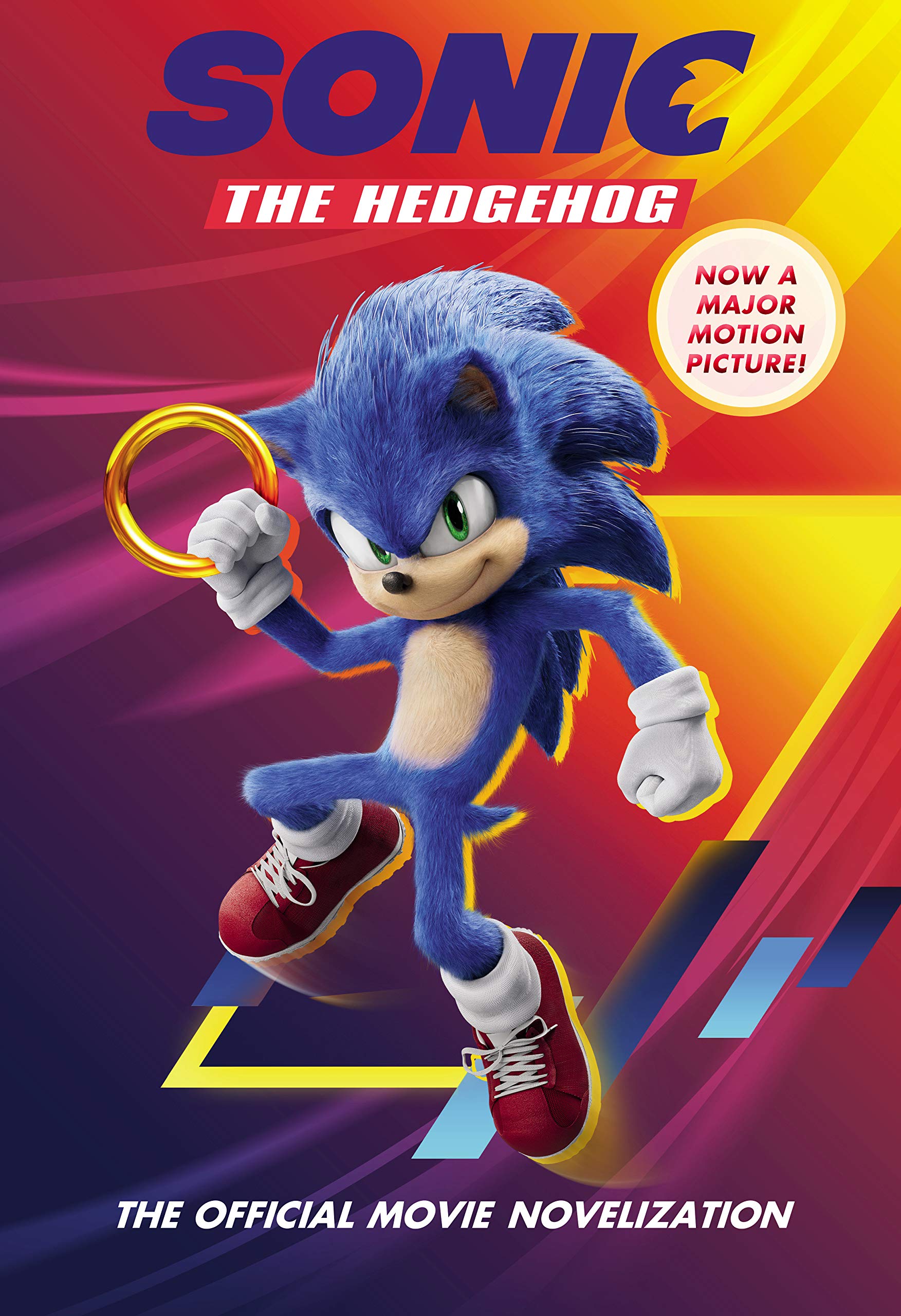 We've already talked about the loooooooong development and behind the scenes issues surrounding production of this masterpiece, I just saw the film recently, so its time to do it to it.

Summary/Plot:
The film kicks off in San Francisco where Sonic is being pursued by Doctor Robotnik. What, already? What the heck is happening?
During the chase, Sonic pauses to narrate as many of you possible non Sonic fans are wondering "why is this handsome hedgehog being chased by a moustached madman from the Civil War". The hedgehog says it feels like he's been running his whole life and, for the sake of simplicity, a rewind begins.

The movie REALLY starts on Sonic's world on what is presumably South Island with young Sonic running through Green Hills all while older Sonic narrates. After watching the hedgehog race through Green Hill, Sonic arrives at his house and we meet his guardian and mother-like figure Longclaw the Owl who is basically "Obi-Wan Kenobi" with a beak and can eat mice.

Um, Sonic. I don't think it's fair comparing Longclaw to Obi Wan, Obi Wan is a human Jedi and Longclaw is a non-mystic owl. Leave the comparisons out or wait until later to discuss them.

Anyways, after Longclaw warns Sonic about being seeing running around, they're attacked by a tribe of Echidnas and are forced to flee before one echidna gets a lucky shot and knocks Longclaw out of the sky. Longclaw conjures up a warp ring leading to our world and tells Sonic to stay hidden before sending him through the ring to the world on the other side of the universe.

After Sonic goes through, he is forced to watch as his motherly figure holds off the echidnas attacking and is heartbroken now that he is alone on planet Earth. Ten years later, in the town of Green Hills, Montana (not Green Hill), we're introduced to Tom Wachowski (played by James Marsden), who is a cop wanting some excitement and to be a real cop.

While at a speed trap, Tom briefly talks with his pal Wade before a semi-grown up Sonic starts playing with Tom, racing around him all without Tom seeing Sonic. However, Tom does find one of Sonic's quills lying around before Wade calls him back to town while the blue blur himself saves a turtle from being run over by a car.

If any of you almost expected Sonic struggling to survive, well, he's basically living his best life on Earth. Sonic's living in the woods, mostly in a cave just having some fun by himself, and often playing with the town hermit Crazy Carl who knows of Sonic's existance and has tried to catch him so many times but has failed. "I KNOW YOU'RE OUT THERE!" Crazy Carl shouts during one of his and Sonic's "playtimes", "I KNOW YOU'RE REAL!"

Also, Sonic's taken a liking to Tom, whom he calls the "Donut Lord" due to the fact Tom eats donuts, and his wife Maddie Wachowski, whom Sonic calls "Pretzel Lady". He's semi-bonded with them from afar and comes over for movie night without the couple noticing. But due to the fact Sonic has to heed Longclaw's warning about people, he's alone and unable to make friends at least for now.

However, things are about to change.
One night, after coming home from cop duty, Tom is amazed that he finally got a letter from the San Francisco Police Academy, accepting his application. Due to the fact Green Hills is too peaceful, Tom wants to find police work elsewhere.

Later, Sonic goes down to the local baseball field and, after the people there head home, plays a game by himself before realizing he truly is alone "forever" and runs around the field before unleashing a MASSIVE power surge that takes out ALL power across Green Hill and the west coast. Word soon reaches the Pentagon (and probably the President) in Washington, as the generals discuss what to do, Commander Walters suggests bringing in Doctor Robotnik, much to the dismay of the others due to previous encounters with the guy.

The following day, Robotnik and his lackey Agent Stone arrive at the baseball field where the millitary is already there. Upon arrival, Robotnik establishes himself as the one in charge, much to the chagrin of Major Bennington as the doctor deploys his Badnik drones who soon discover Sonic, who grabs his bag of rings and prepares to leave Earth to go to the Mushroom Planet.

As he tries to hide from the drones and army troops, Sonic goes into "Donut Lord's" garage and ends up attracting Tom's attention who goes inside just as the little blue hedgehog prepares to use his ring to head to the Mushroom Planet.

Tom: SFPD, PENDING SECURITY CHECK, PAWS IN THE AIR WHERE I CAN SEE 'EM!

Tom and Sonic scream at the sight of each other and the cop shoots Sonic with a tranquilizer gun, before the hedgehog passes out, he sees Tom's San Francisco T shirt and says "San Francisco" which leads to one of his rings opening a portal to San Francisco and Sonic's ring bag falls on to the roof of the Transamerica Pyramid.

Sonic regains consciousness in Tom's house and Tom is surprised to see that the "Blue Demon" that Crazy Carl was talking about is real. As they talk, Tom is also confused as to why Sonic calls him the Donut Lord, which the hedgehog explains is due to the fact Tom talks to donuts and then eats them "whenever they get out of line".

The speedy hedgehog realizes he's still on Earth and lost his rings before beginning to panic just as Robotnik's truck moves into the area, Sonic begs with Tom to help him and, reluctantly, Tom agrees to help the blue hedgehog by hiding him the attic before talking with Doctor Robotnik, who at first tries to trick the cop into thinking he, Robotnik, is from the power company.

Robotnik's drones enter the house and begin scanning for Sonic, who panics and semi-spin dashes downstairs, the sound of Sonic crashing into a shelf attracts Robotnik's attention and he enters the house before finding Sonic's quill that Tom acquired earlier. Afterwards, the villain proceeds to threaten the cop, which is a biiiiiiig no no as threatening an officer can get you into trouble.

However, just as Robotnik reaches "1", Sonic comes out of hiding and begs with the doctor not to hurt him. Robotnik, caught off guard by the sight of the hedgehog, lets out a scream before Tom punches him in the face and knocks out the doctor. Sonic and Tom narrowly escape the house in Tom's car just as Agent Stone arrives to see if the doctor is ok. Sure enough, just like Snively and many other Robotnik lackeys before him in previous Sonic continuities, Agent Stone is not safe from being treated like crap by Doctor Robotnik.

Sonic and Tom later stop by a biker bar and, after Tom makes a phone call to Green Hills police station which gets intercepted by Robotnik who threatens Tom, they go inside the bar where a bar fight eventually ensues when a burly biker antagonizes Sonic and Tom and the blue hedgehog attempts to hit the man in the head with a bottle.

By the end of the bar fight, the duo make a get away in the car and spend the night at a hotel before hitting the road again in the morning. Robotnik soon catches up with one of his robots and attacks Sonic and Tom, but the robot is decimated again and again as it changes until it eventually becomes a small Robotnik Drone that tears off a bit of the car and then becomes a bomb.

Sonic and Tom attempt to deal with the bomb bot which does attach to one of them for a time. The bomb eventually goes off and Sonic is hurt, thankfully the explosion wasn't enough to actually end the hedgehog's life. Tom is alright, but none too worse for wear.

Tom eventually gets Sonic to San Francisco and heads to Rachel's house where Maddie is staying, however Rachel does not like Tom and wants him and Maddie to end their relationship. Thankfully, Tom's niece Jojo is more nicer than her mother and respects the couple. Maddie examines Sonic and revives him with salt smeller shakers, leading to this line from the hedgehog.

Sonic: Where am I, what year is it, is the Rock president?
Note: Sonic was referring to Dwayne Johnson, who actually played the old Sonic games in college and is a great actor.

Anyways, Sonic, Tom and Maddie head off to the Transamerica Building where Sonic gets his rings back, but the happy moment is ruined when Doctor Robotnik arrives in his Egg Mobile and his Drones, determined to capture Sonic, discover the source of his power and (eventually) take over the world. Knowing what to do, the hedgehog sends Tom and Maddie back to Green Hills via Warp Ring to safety before facing Robotnik and tries to escape from him.

The mad doctor chases the hypersonic hedgehog through the streets of San Francisco, which we mostly did see at the start of the movie, and the chase takes them to France, China, Egypt and back to Green Hills. Sonic does get injured for a time, but he recovers and is able to defeat Robotnik, sending him through a Warp Ring to the Mushroom Planet with help from Tom.

Things in Green Hills proceed on as normal, Tom and Maddie work on fixing the house which got wrecked during the first confrontation with Robotnik and Sonic ends up moving in with them as the married couple set up their attic to be just like the hedgehog's cave, leading to a nice heartwarming ending or so it seems.

Meanwhile, on the Mushroom Planet, Robotnik has shaved his head, his moustache grown bigger to be similar to mainstream Eggman's mustache, and he's plotting his revenge against Sonic. As the doctor vows to return home by Christmas, he starts trekking across the Mushroom Planet, chucking a rock ahead of him and shouting "ROCK-CONISANCE" while laughing evilly as the film ends.

After the pixelated credits sequence, a warp ring appears near a cliff and Sonic's buddy Miles Tails Prower emerges. Tails hopes he's not too late as he takes to the air and flies off towards Green Hill as the film truely ends and we get another credits sequence.

Novelization/Conclusion-thoughts:
For a video game film that spent two and a half decades in the works, passing from producer to producer and studio to studio until it finally got off the ground, Sonic the Hedgehog is pretty good and, in fact, it was a box office success and there's a chance we may see a sequel very soon. The acting/actors was/were amazing, the special effects were neat, the soundtrack rocked and the plot of the movie was pretty decent.

This film sure was fun and, given that there were so many easter eggs and homages to Sonic's nearly three decade long history, this could be the perfect way to kick off Sonic's 30th Anniversary.

Hope you continue to love Sonic, folks.
See you later!