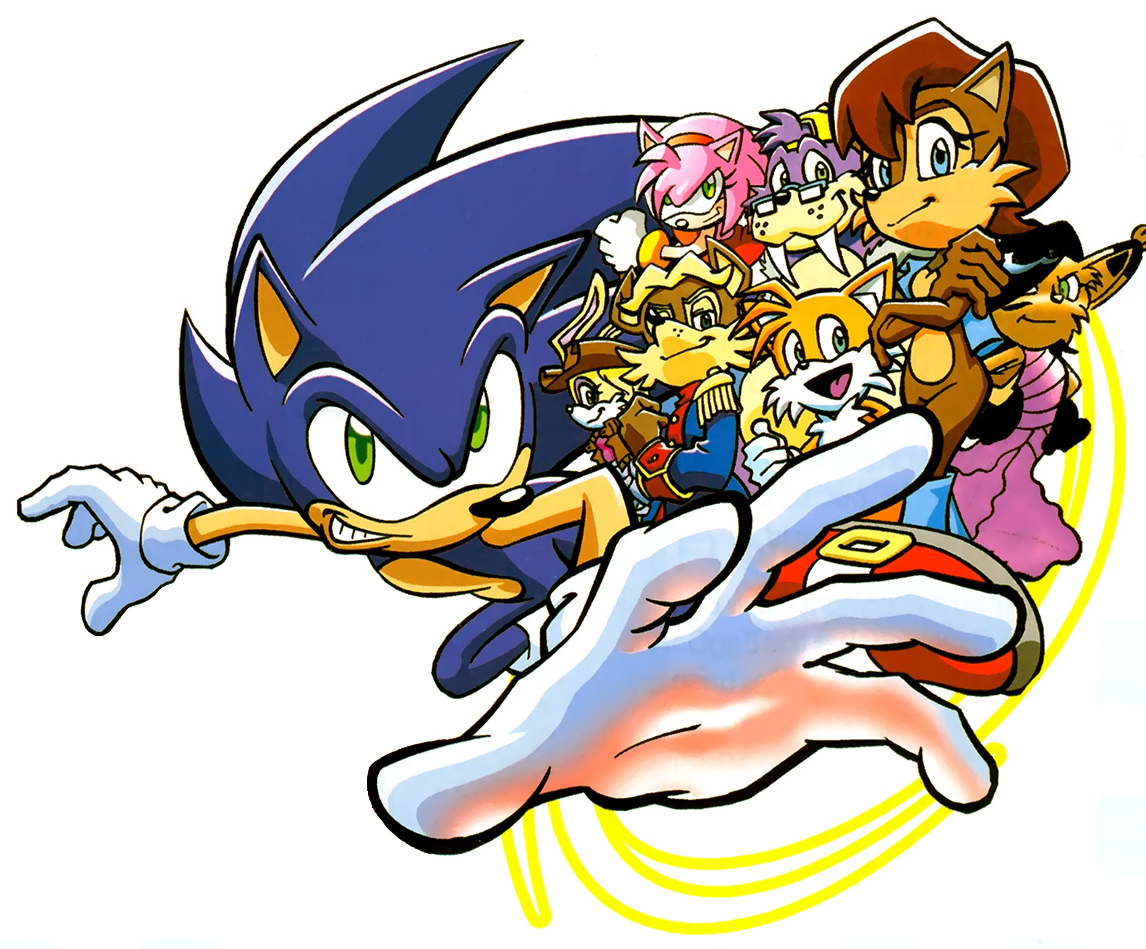 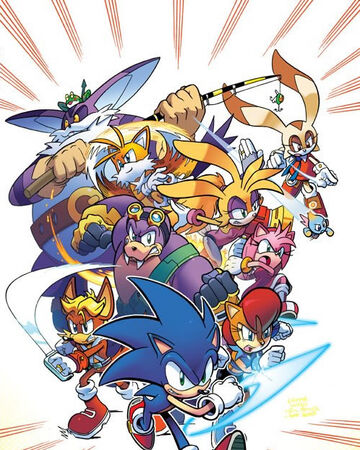 Hey there Sonic fans, CrazyGamerHistorian1999 here and after countless months following the end of Archie Sonic and the beginning of the IDW Sonic era, I have decided to give my overall thoughts about the inclusion of Sally Acorn, the Freedom Fighters and familiar Archie-SatAM elements/characters into the world of IDW Sonic. So lets get right to it.... 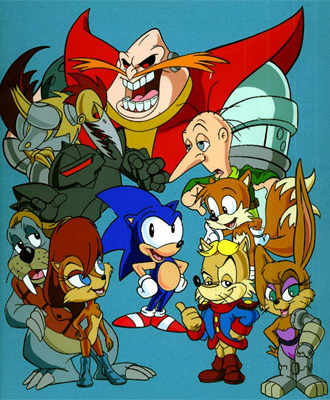 First of all, for those who are new to Sonic and are wondering who the Freedom Fighters are, allow me to explain: Back in the early 1990s, with the success of Sonic the Hedgehog for the SEGA Genesis, merchandise followed which included comic books and cartoons, many of which included Sonic SatAM and the Archie Sonic comics. Sonic SatAM was different compared to the goofy cartoon known as Adventures of Sonic the Hedgehog, how different, well, Doctor Robotnik had taken over the world and it was up to Sonic and his friends to take it back from him.
SatAM is where the fans were introduced to the iconic Freedom Fighters, consisting of Sally Acorn (who'd go on to be a popular character and a love interest for Sonic), Rotor the Walrus, Nicole (Sally's Computer), Antoine D' Coolette and Bunnie Rabbot. However, if you want to be technical, you could say that the Archie Sonic miniseries of 1992-1993 was where the Freedom Fighters were introduced.

Either way, just like the cartoon, the Freedom Fighters gained enough popularity to be fan favorites over the years. Long after SatAM went off the air, the stories of Sally Acorn, Bunnie, Antoine and Rotor and many of the other SatAM characters continued in the pages of Archie Sonic, which was basically similar to the cartoon and practically seen as a continuation of SatAM in the later years. Throughout the Archie series' run, specifically in the pre-reboot era, the Freedom Fighters (along with Sonic and the SEGA cast) would have many adventures and misadventures, face hardships and continue their battles against villains like Doctor Eggman, alternate reality doppelgangers and a lot more bad guys along the way including the likes of Mammoth Mogul and Ixis Naugus. 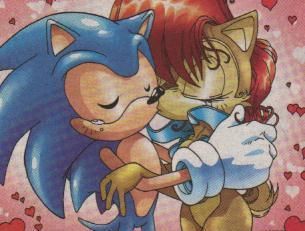 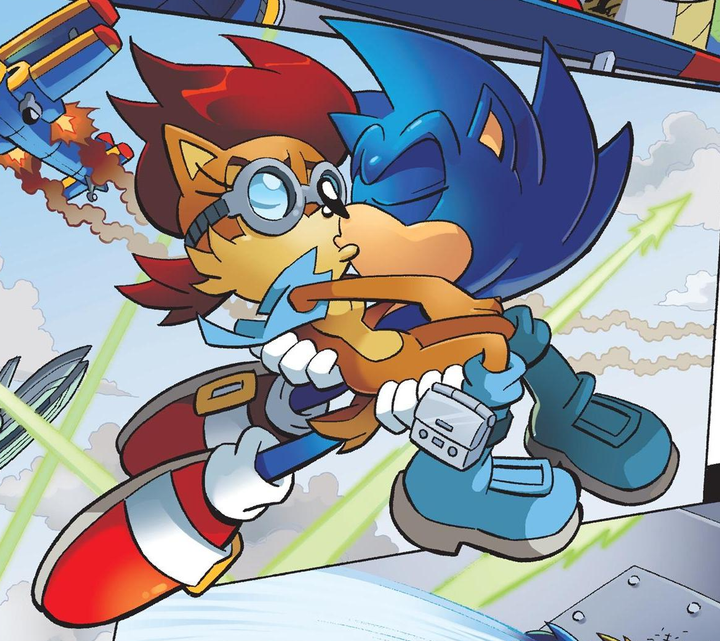 Lets not forget the ever-popular and well-known relationship between Sonic and Sally that fans have grown to appreciate over the years to a point where we have the not-so infamous SonSal shippers. At first Sonic and Sally were friends, then their relationship blossomed into romance and their bond strengthened. However, due to their status as heroes and the fact there would always be challenges for them, Sonic and Sally's relationship was tested many times, be it through love triangles, a harsh break up, a threat from somebody like Eggman. But in the end, after so much had happened with them, specifically following Sonic's return from space, their relationship was stronger than ever...

...Until the Mecha Sally arc happened, eventually leading to the reboot era.
As the Archie Sonic comic changed, so to did the Freedom Fighters. Following some behind the scenes issues, mostly involving a legal battle and increasing SEGA mandates, the world of Archie Sonic rebooted following the events of the fan-favorite 2013 Sonic & Mega Man Worlds Collide crossover and, with it, the Freedom Fighters got a brand new look and almost a new lease on life where they looked as though they could fit right on in with the Modern Sonic games.
However, while some things remained the same with them (i.e their fight for freedom and the relationship between Antoine and Bunnie), some things changed with Sonic and Sally mostly no longer being in a romantic relationship (due to mandates and the staff's dislike of shipping wars).
The Archie Sonic comics and the adventures of Sonic and the Freedom Fighters continued well past the reboot of 2013 until the series came to an end in 2017, paving the way for IDW to take the Sonic licence, bring in familiar talent and tell new stories.

This now brings us to the topic we will be discussing: The inclusion of the Freedom Fighters and Sally Acorn in IDW Sonic, which has yet to happen as of this post. Ever since the announcement of IDW gaining the Sonic license from SEGA following the end of Archie, and ever since the IDW Sonic era began, many fans (including a friend of mine named Darryl Heines) have wanted to see the likes of Sally, Bunnie, Rotor, Antoine, Nicole and many familiar faces from Archie to pop up in the comic and have been demanding their inclusion for almost three years.
Heck, my pal Darryl talks about it constantly on Twitter, saying, "I wanna see the Freedom Fighters in the comic, when are they gonna show up, will they finally appear?" I know thats not what he's saying, but either way, I want to give my overall thoughts on the matter...

Would I love to see the Freedom Fighters show up in IDW Sonic? My answer is yes.
However, when it comes to the Freedom Fighters inclusion and debut in the comic, I want it to be done in away that is satisfying and doesn't look as if they're being shoehorned in. I also hope they are not underused or overused and are utilized correctly. I want many fans to be happy with the return of the Freedom Fighters. But its gonna be a while before it kinda happens. Remember, IDW Sonic is new and just got started, in fact, its almost been two years since the comic's first issue started, not to mention that 3-4 years have nearly passed since the end of Archie Sonic. 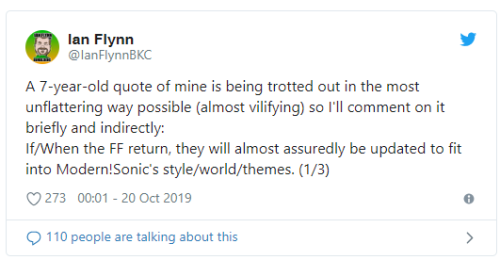 However, despite the fact the inclusion of the Freedom Fighters is very unlikely, there is a bit of hope: According to Ian Flynn, he is pushing very hard to include them into the comic but here's a catch, if and when they do show up, the characters are gonna have to be redesigned again as their post-reboot Archie designs are basically off limits. I'm not worried in the slightest and will be excited if and when I do hear the news that the characters we've pushed to hard to see again will be showing up in the world of IDW Sonic.
But when that happens, how will things play out and will we get a bit of Sonic & Sally romance? In fact, my big concern with the Freedom Fighters showing up and the possibility of IDW SonSal is that it will mean there won't be much IDW SonAmy moments and you know how much I love SonAmy. Some of my favorite moments in the comic besides the action scenes happen to be the interactions between Sonic and Amy, including their scenes in Issue Two.

If SEGA's little mandate about Sonic being single still stands and there aren't any Sonic X Sally moments, I'll just shrug it off and act as though its probably nothing. Either way, I'd still be happy to see IDW Sonic acknowledge, reference and bring in some elements from past Sonic media. The comic has started to do that within the past year, for example, Badniks resembling Scratch and Grounder from AoSTH and Archie were seen in a warehouse on a shelf in issue two of the Whisper and Tangle miniseries. Lets not forget that we did see a few characters who almost looked like Antoine and Bunnie.

Before we wrap this up, I want to move away from the Freedom Fighters and bring up another famous character who's gained popularity in the Sonic community: Sticks the Badger. For those of you who do not recall clearly, Sticks the Badger is a character from Sonic Boom, a sub-franchise part of the Sonic franchise that had a different take on Sonic and his friends, which had a TV show, three games and, yes, a comic done by Archie for a time. Sticks is a member of Team Sonic in the Sonic Boom TV show and is good friends with Amy Rose, what makes her unique and stand out from the other characters is that she's wacky, uses a boomerang and is downright crazy.

"CrazyGamerHistorian1999," I hear you say, "Whats she got to do with IDW Sonic?" Allow me to explain, I actually would love to see her show up in IDW Sonic as one of the many elements from certain other Sonic media like Sonic Boom to appear. In fact, given Sticks' popularity and Sonic Boom having tons of fans, so many people would love to see her show up. I actually asked Ian Flynn on his personal podcast BumbleKast if she would show up and his response was more along the lines of wait and see. In a later episode of the show, during a Q&A, someone with the name Sticks the Badger, asked if she would appear and it turns out, Ian has pitched the idea of Sticks' inclusion many  times only for the higher-ups (i.e SEGA) to say no.

While the inclusion of Sticks is unlikely, there is still a chance, but again, like with the Freedom Fighters, its gonna be a bit before Sticks shows up.
Anyways, this is where I sign off. Keep enjoying the comic and don't get your hopes up too high, fellow readers.