Salutations Star Wars fans, here I am, bringing you my review of the comic known as Old Wounds, which saw the return of Darth Maul after his defeat in the Phantom Menace well before the Clone Wars TV show brought him back from the grave. 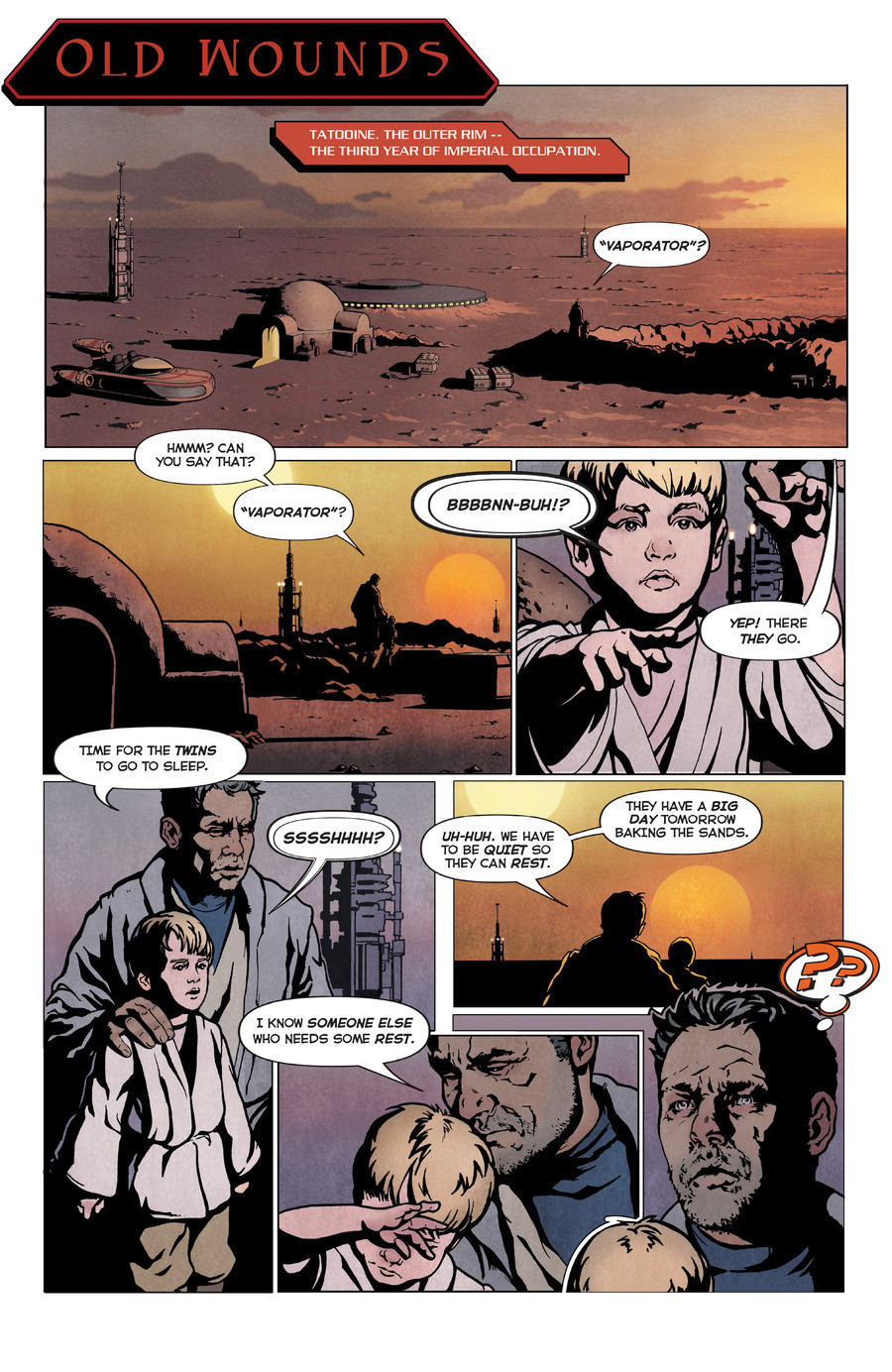 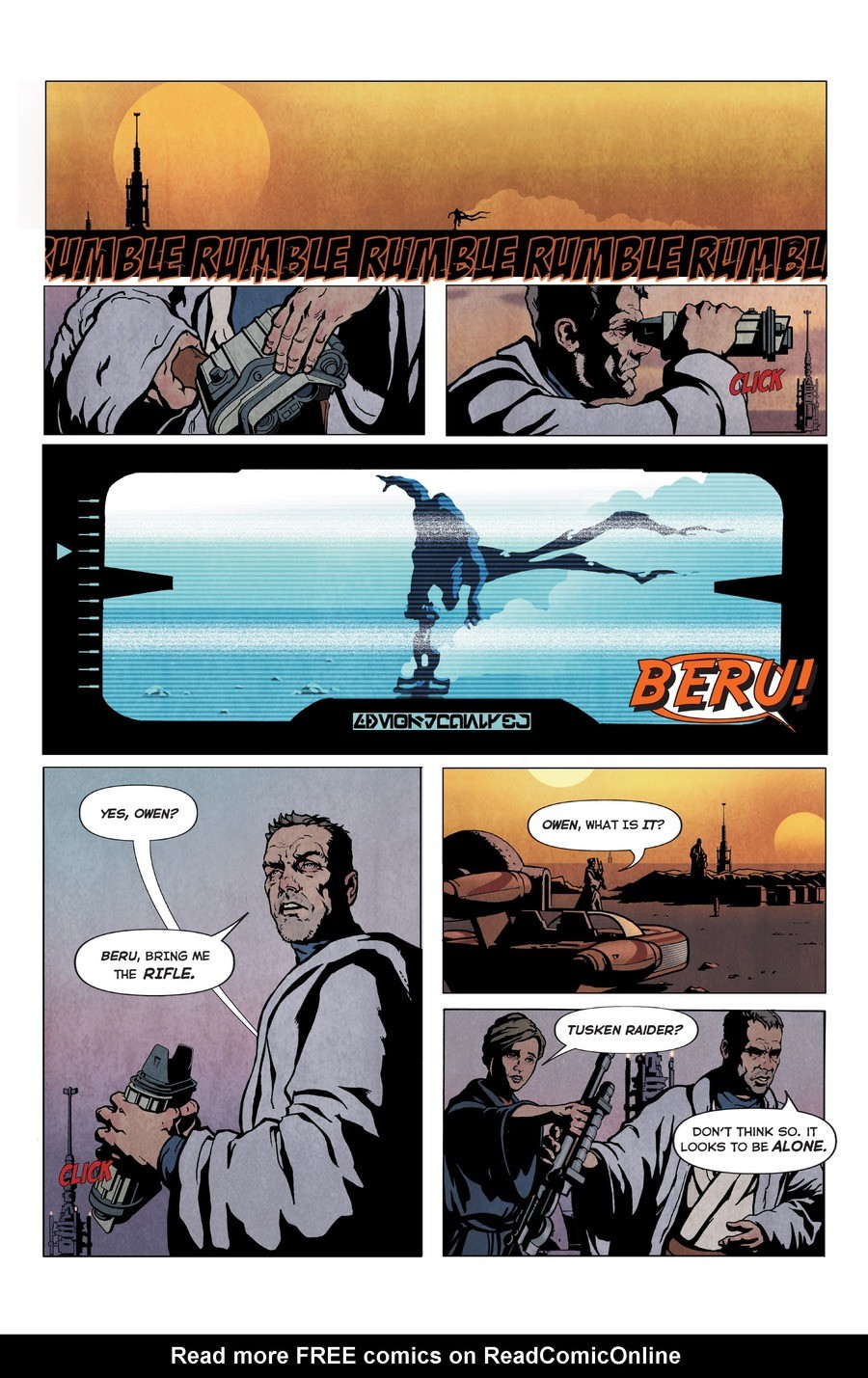 The year is 16 BBY, a few years have passed following the end of the Clone Wars and the Rise of the Empire, most of the galaxy is under the iron fisted rule of Darth Sidious and his forces. But on the desert planet of Tatooine, everything is peaceful. Its the end of another day, Owen Lars and his nephew three year old Luke Skywalker are wrapping up their activities for the day. But then, the peace is interrupted when Owen spots a dark cloaked figure with robotic legs running towards the farm at high speed. "Beru." Owen shouts, "Get me my rifle and take Luke inside." 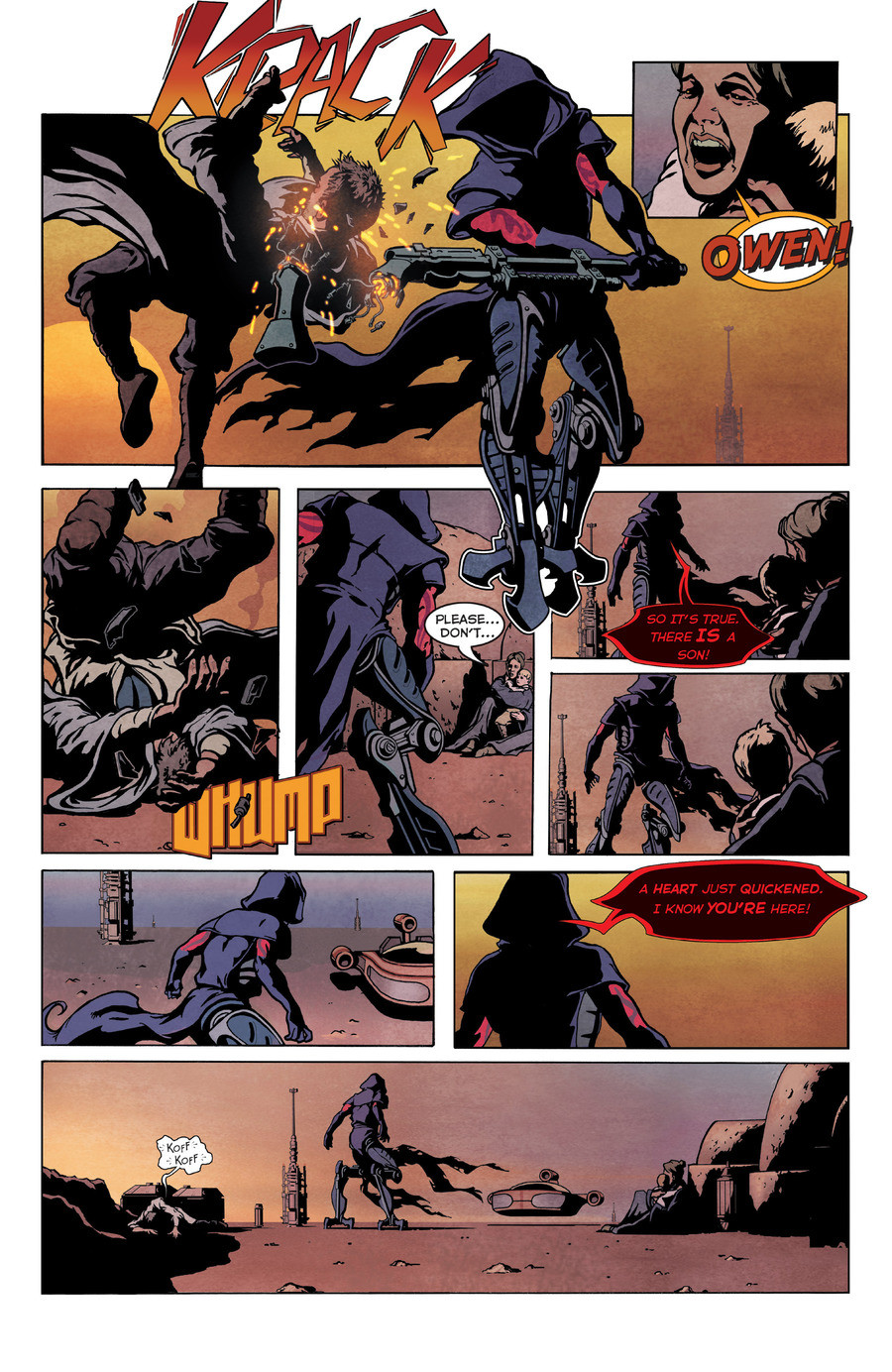 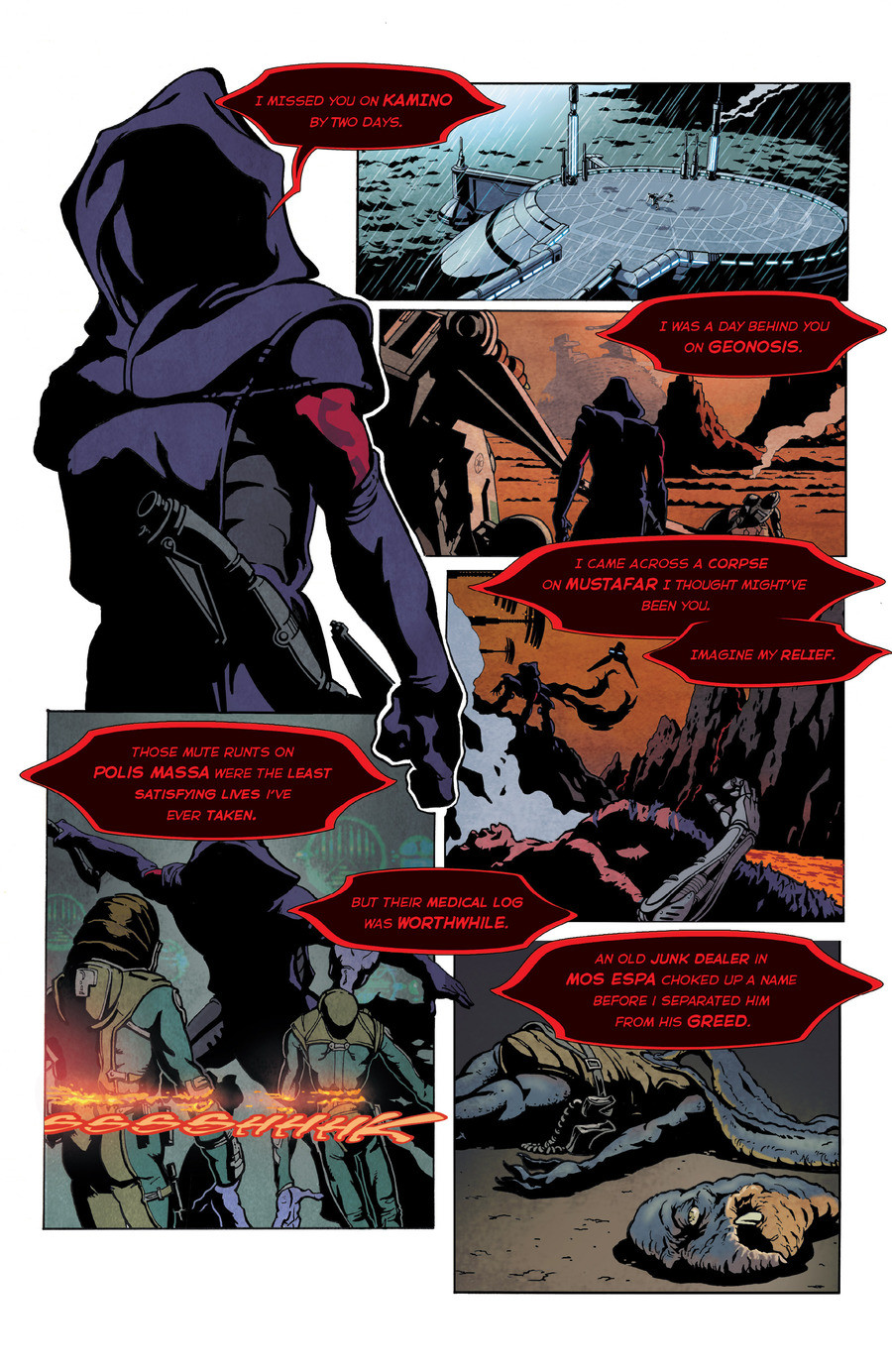 Getting his rifle, Owen warns the figure to stop and show his hands, only for the dark one to not halt his oncoming advance. His warnings ignored, the moisture farmer fires off a few shots only for the figure to evade them all and use the force to grab the rifle and uses it to smack Owen in the face before advancing on Beru and young Luke. Before the figure can do anything, he halts and comments that it is true there is a son before he senses a presence and says, "A heart quickened, you're here."
The dark sider tells his story, saying he missed him on Kamino by two days, was behind him on Geonosis and found a corpse on Mustafar. The force-wielder goes on to say that while the mute runs on Polis Masa were the least satisfying lives he ever took and their medical log was worth while, an old junk dealer in Mos Espa choked up a name before he was seperated from his greed. 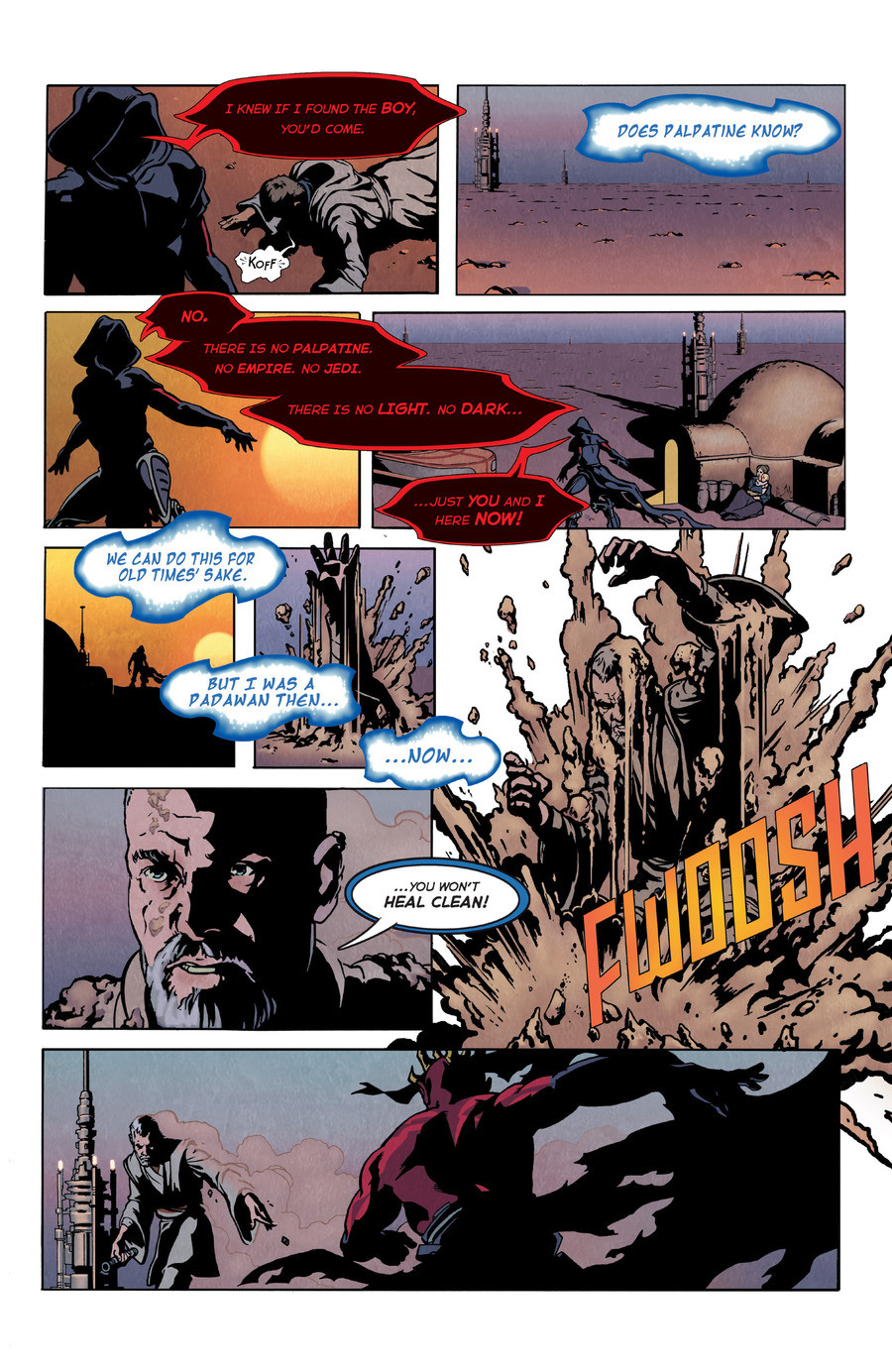 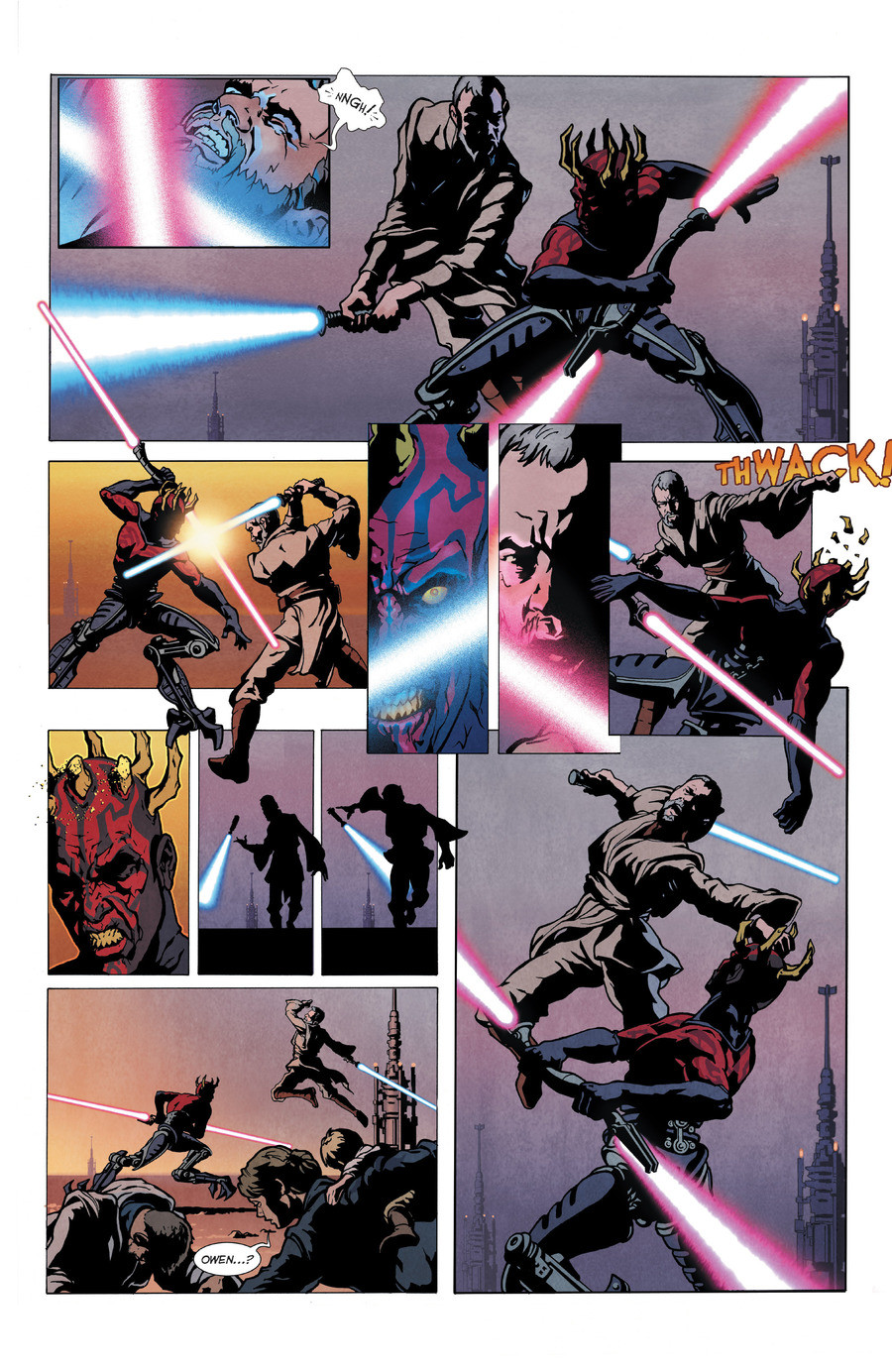 "I knew then." The figure says, "If I found the boy, you'd come."
"Does Palpatine know?" The voice of Obi Wan asks.
"No, there is no Palpatine, no Empire, no light or dark, no Jedi or Sith. Just you and me, here now."
"We could do this for old times sake, but I was a Padawan then, now..."

Obi Wan emerges from beneath the sand, warning his old foe that he won't heal clean this time. The two combatants circle each other, prepared for battle, the cloaked figure tossing his cloak aside, revealing himself to be the former Sith apprentice Darth Maul. Having survived the Battle of Naboo and somehow acquired himself new, robotic legs, Maul is ready to take his revenge. The former Sith draws his new lightsaber and attacks Obi Wan, the battle of the decade unfolding where it all began years prior upon a desert planet with twin suns.
Only now, it's just Obi Wan and Maul, nothing there or left for them. Maul seeks revenge against Kenobi for robbing him of everything, eager to destroy him. 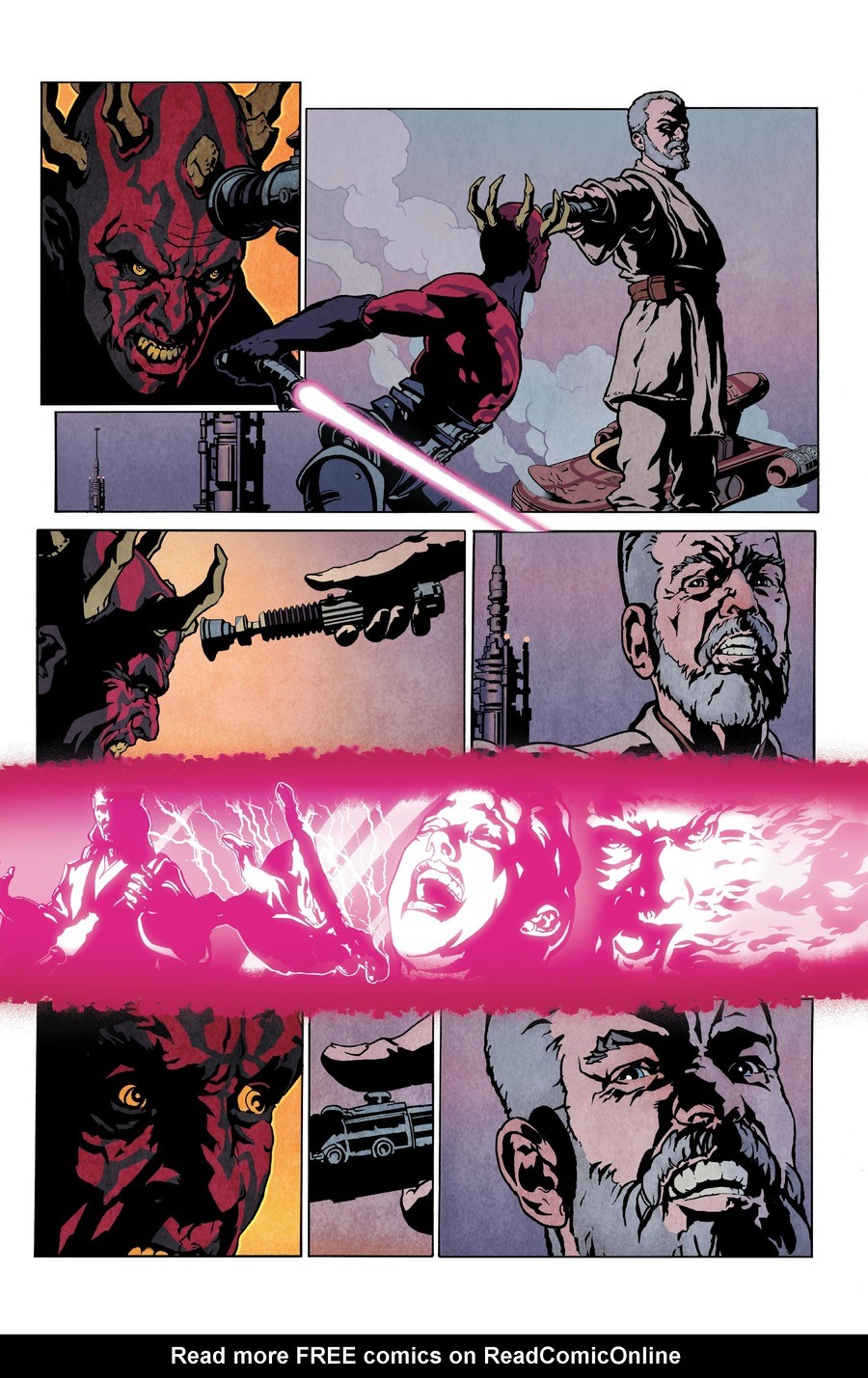 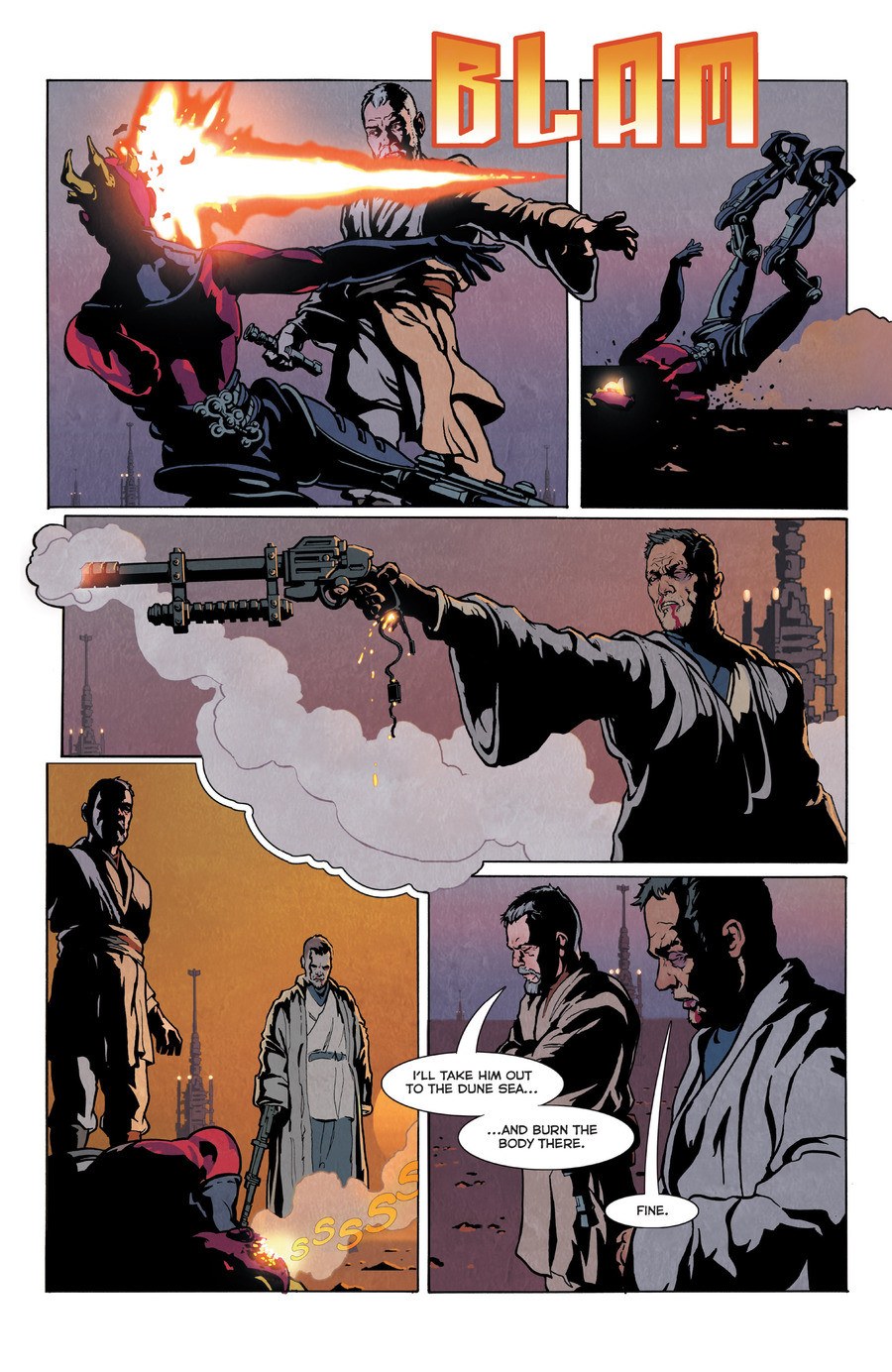 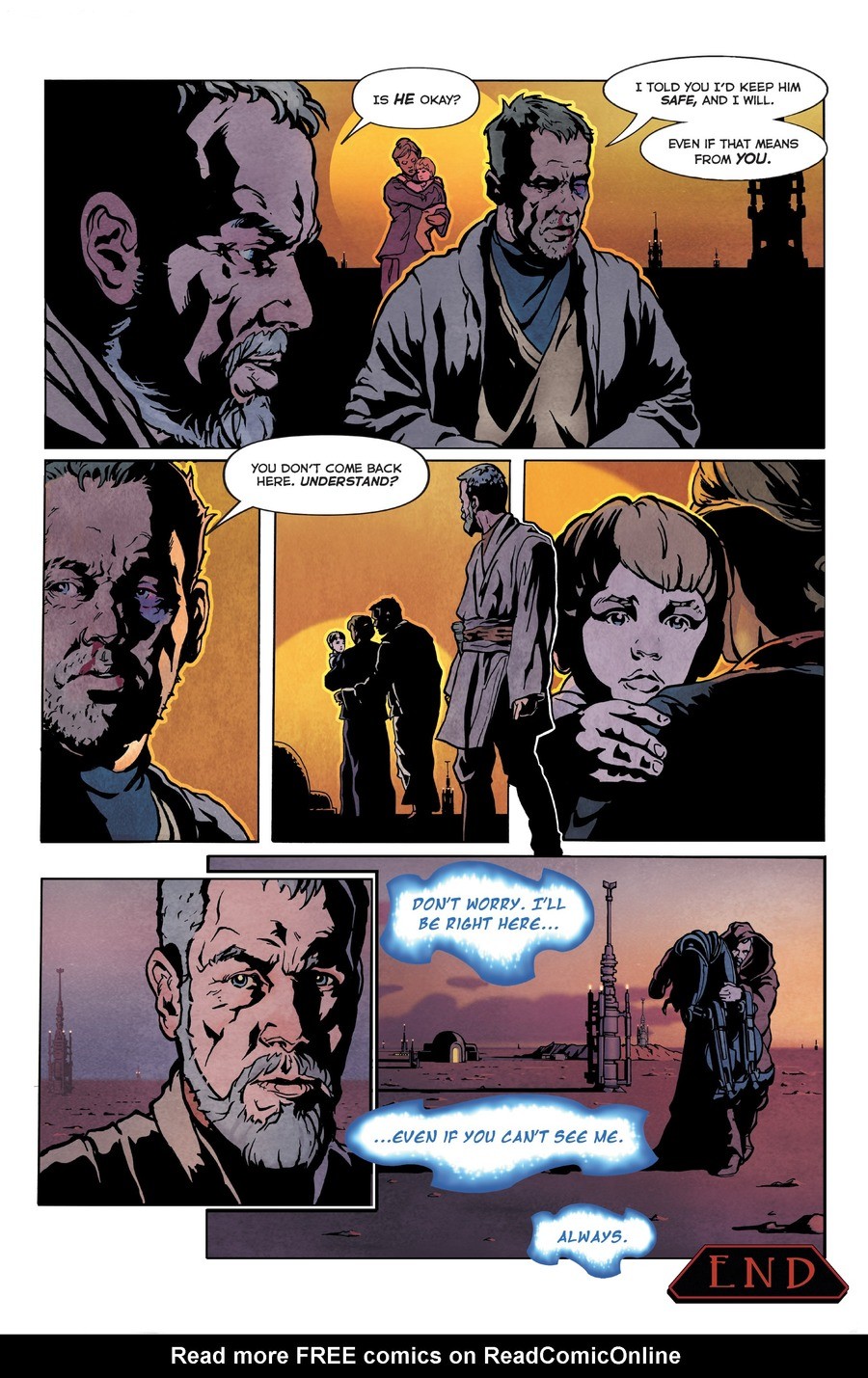 The battle is intense, the two combatants clashing and locking blades, Obi Wan gains the upper hand at various points, breaking off most of Maul's horns and eventually slicing off the Zabrak's arm. As Maul recovers, he finds himself at Obi Wan's mercy, the Jedi has his deactivated lightsaber pointed at the Sith's head. Obi Wan hesitates, tempted to end the dark side warrior in cold blood. One press of the activation button and he can end Maul's reign of terror for good.
But before Obi Wan can do anything, a blaster bolt strikes Maul in the side of the head, knocking his lifeless body to the ground and ending the cyborg Sith for good. Owen is the one who fired the shot, having recovered from being smacked by Maul. Obi Wan says he will take the body out to the dune sea and burn it there while Owen tells the Jedi Master to stay away as his presence is a great risk to every single one of his family including Luke.
Taking one last look at Luke and doning his cloak, Obi Wan sends a telepathic message to the young boy as he carries what remains of Maul out to the Dune Sea, saying that even if Luke can't see him, Obi Wan will always be there to watch him. Thus ending the comic!

Thoughts/Conclusion:
Despite not being 100% canon in the old Legends timeline, Old Wounds is a really incredible story, one that has relevance today. Is it worth reading? Yes. Go ahead and read it!