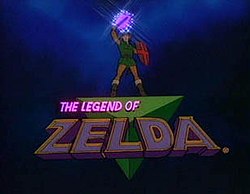 The Legend of Zelda, Nintendo's most cherished video game franchise that has been going strong since 1986-1987. But we're not here to talk about any of the games or do a retrospective of it, yet. We're talking about the cartoon. Salutations, people, this is James M here and let us begin this one.

By the late 1980s and early 1990s, with the success of video games, cartoons based on video games were pretty popular and, given the success of The Legend of Zelda, it was a matter of time before a cartoon happened and it did happen. So what is the Zelda cartoon all about?
In the fantasy world of Hyrule, Link and Princess Zelda fight to protect the Triforce from the king of darkness Ganon himself. Ganon is still a major threat and the main villain, but he is a bit goofy. What do you expect? This is a family-friendly show and Zelda is partially meant to be family-friendly. The series ran for 13 episodes and one season before being canceled. Was it popular among many? Yes, it was. Is it enjoyable? Of course, it's worth watching.

When it comes to the voice acting, hearing Link talk isn't all too bad, as long as you can not worry about the whole "hey excuse me princess" line that has become a bit infamous over the years. When it comes to Zelda's design? It's actually pretty decent, who wants to see her constantly be the damsel in distress all the time and be your typical princess. Heck, at one point in the show, we actually see her in a swimsuit. Even though it's not a two-piece, she still looks great. The episode we see Zelda in a swimsuit? It's a water park episode and we see her in a swimsuit twice. Once at the beginning and again at the end of the episode where she and Link are having fun in the water park.
Either way, the show knows how to impress people and deliver some quality fan service.

Speaking of Link and Zelda, Link is in love with her and a running gag throughout the series involves him trying to get her to kiss him only for everything to always go south for them afterwards. Technically, the kiss does happen at one point. Except for the Zelda that Link gets to kiss is not the real Zelda, but a doppelganger created by Ganon himself. Yup, we have the bad guy gal doppelganger episode that most shows are famous for. Link and Zelda's relationship throughout the Legend of Zelda franchise's history has changed a bit over the year, most of the time there has always been a bit of a romance between them, leading to Zelink shippers coming up with their own stories.

My thoughts on the cartoon?
Its really good and, of course, worth your time if you are a Zelda fan.
Sorry, my review was short, but I tend to do that sometimes.
See you all later, my friends.
-James M
at December 17, 2019