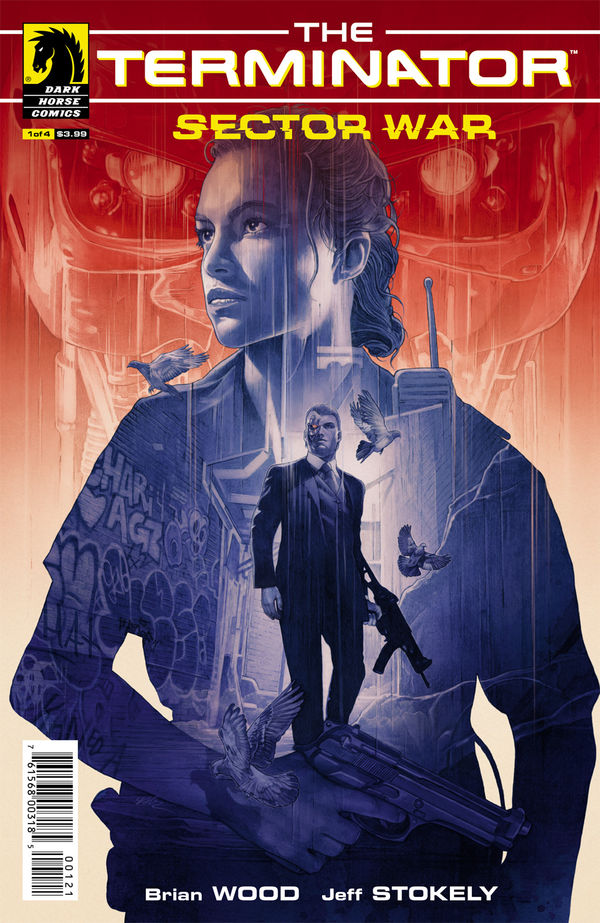 Hey there Terminator fans, James M here and we will today be looking at a Terminator comic book, but not just any comic book. We're looking at Terminator Sector War by Brian Wood and Jeff Stokely.
Like other Terminator novels and comics, this comic tells a story beyond the first film and is actually taking place during the exact same time as the first movie. So, what is the plot?

After a nice little intro showing the war-torn future and that same message from the beginning of the first movie talking about the final battle of the War Against The Machines happening in 1984, we cut to New York City in 1984 where a T-800 arrives from the future in an alleyway VIA time displacement field. As usual, given the fact its naked, the first thing it does is go get clothes. So where does the T-800 get clothes? From a business man who was just using a phone booth. So who is the cyborg after? A female cop named Lucy Castro. Why Lucy? We'll answer that in a bit...

Anyways, Lucy gets a call from a guy and goes to his house only for the T-800 to show up and all heck breaks loose with the gal in the house getting K.Oed and the dude gets terminated while Lucy narrowly escapes with her life. Later, while she's recovering, we learn (much to her shock) that she's basically prego. She probably must've had a night-in with a guy a month prior and didn't take any pills. Oh crap, once her boss finds out, Lucy is so getting fired. With the Terminator on her tail, Lucy finds herself without a choice but to actually form an alliance with a gang of criminals run by a crime boss whom she's been working against for years.

After meeting with the criminal cartel and working things out with them, they get ready for the Terminator's attack. When the T-800 shows up, the thugs begin attacking with their firearms, the only result leading to the Terminator's living tissue being completely destroyed, revealing its robotic endoskeleton. Lucy comes face to face with the Terminator, who tells her, "I am Cyberdine Systems Model 101. You are formidable, Lucy Castro. Forty years from now, your daughter participates in a resistance attack on a Skynet defense grid which is successful."
Lucy is shocked. "I'm going to have a daughter?"
"Correct." The Terminator nods
"At least let me see my daughter." Lucy begs.
"Not possible, Lucy Castro. Prepare to be terminated!"

Lucy escapes from the Terminator and a chase ensues, leading into the finale of the miniseries where the two fight, it is a battle not just for the future, but for the survival of Lucy and her unborn daughter. If Lucy does not live, neither will the baby who is still stirring and forming in her belly. The battle ends with Lucy getting the upper hand and smashing the T-800 into a river with a crane. In the aftermath, Lucy is okay and so is the unseen baby. She heads back to the police station, takes a shower to clean off and gets changed before she leaves New York to head to L.A. That's right, she just heard about the attempted assassination of Sarah Connor and wishes to speak with her, sorta. The comic pretty much ends with Lucy walking away as she narrates, "I might reach Los Angeles in a few days, me and Sarah will have a lot to talk about."

Final Thoughts:
This comic is quite good, the folks behind it did a swell job capturing the tone of the Terminator films and making everything suspenseful. I enjoyed this myself and suggest you all read it eventually. For now, this is where I take my leave.
PEACE!
-CrazyGamerHistorian1999
at November 27, 2019