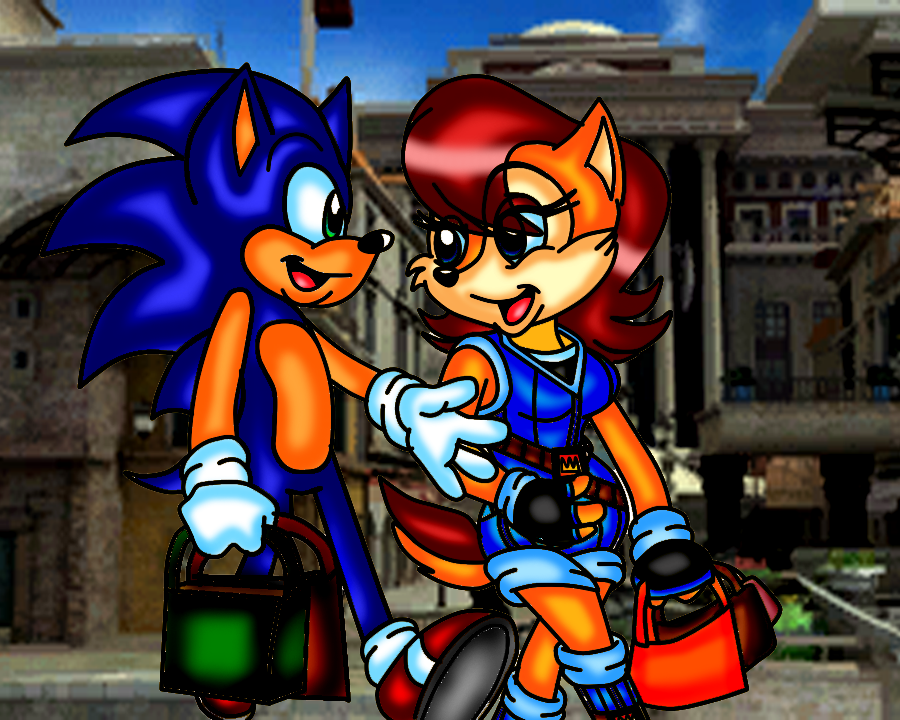 Hey there, James M here again and today we're gonna be looking at something different, something made by fans for the fans, we will be looking at JayFoxFire's YouTube series Sonic Family Life.

"Lets do it too it."
-Sonic the Hedgehog

For quite some time, ever since the internet began and since certain franchises like the Sonic series have been popular, fans have come together to tell their own stories revolving around either Sonic or Mario. Over time, these stories told by fans have become known as fan-fiction and it has come in many different forms like fan art, fan stories, fan comics and videos such as fan animations or fan series vids. Sonic Family Life is a prime example, JayFoxFire is an artist and has been a Sonic fan for who knows how long, probably since 1993 when SatAM was airing and Sonic was popular.

So what is the plot?

Nothing much, however, I can give you the details about the series so far.

By the time of episode one, Doctor Ivo Eggman Robotnik has long been defeated and Mobius is at peace for who knows how long. World hero Sonic the Hedgehog and Princess Sally have been engaged, since the events of a fan-comic done by JayFox known as The Proposal, and their wedding is about to happen. Yup, they're tyin' the knot and, this time, its not a stage play like in Archie Sonic #18 or the whole Light Mobius aka Mobius X Years later saga. This is in the same universe as most of the games, half the comics and part of the Sonic SatAM cartoon took place.

*Side note: The comic serving as a prequel to Family Life is right here...]
https://www.deviantart.com/jayfoxfire/gallery/52314988/sonsal-wedding-proposal

Anyway, episode one kicks off with Sally, with help from her friends (including Julie Su from Archie), getting ready for the big ceremony and she's thrilled about it. Sonic? He's with his mum and pop Jules and Bernie Hedgehog, his Uncle Chuck and buddy Tails also getting ready. He says that he's a bit nervous only for Tails to say, "Come on, Sonic. You're marrying Aunt Sally." To be fair, Tails, loads of people get a bit nervous and excited before a big thing happens. Soon, everybody's ready. But there's a bit of a complication, Sally's pop King Max is sick, so when it looks as though Sally's gonna walk to the alter by herself, Jules (doing Sonic, who learned about Max's condition, a favor) takes the king's place in walking Sally down the aisle.

The ceremony begins and the go-between officiator is a humanoid lion guy named Leonard who looks like Simba from The Lion King (due to the fact JayFoxFire is a fan of that movie), after a little song from Mina Mongoose, Sonic and Sally exchange their vows (by reading off notes to each other) and, after the exchanging of rings, they finally become Sonic and Sally Hedgehog. Oh, I'm sorry, Sonic and Sally Hedgeacorn. Sonic tells the pastor to give them the Hedgeacorn surname, considering the fact that Sally having the surname "hedgehog" would be just weird.

After the ceremony and, later, the reception, Sonic and Sally board a plane (the same one she and King Max used to go to the Floating Island when she was young) and they head to Spagonia from Sonic Unleashed for their vacation/honeymoon. The first episode ends with them at their hotel, changing out of their formal attire and going to bed together for some shut eye. Episode two shows Sonic and Sally's honeymoon in Spagonia, sight-seeing, shopping, eating exotic meals and actually meeting Professor Pickle, who makes a nice little cameo a few minutes into the episode. Towards the end, Sonic and his beloved royal chipmunk wife head home where Sonic and his family have a big surprise for her, a brand new house, and the episode ends with Sonic and Sally beginning their new life as, well, Mr. and Mrs. Hedgeacorn.

Side Note: Even though Mobius is safe and Robotnik is gone, in this universe, while Mobotroplis is the seat of power for the Kingdom of Acorn, most of the inhabitants (including Sonic and Sally) still reside in Knothole village.

Episode 3 is where things really start to get a bit more fascinating, one day, Sonic and Sally are at Antoine and Bunnie's place for a brunch get together and they learn something that amazes them; Bunnie and Antoine are having a baby. Later at home, Sonic and Sally discuss the idea of having a baby and agree on waiting until after Bunnie's kids are born before deciding if they want kids. Months later, Bunnie and Antoine's cute and (in Antoine's words) precious bay-beez are born. Their names, Jacques and Belle. Now why do those sound familiar? 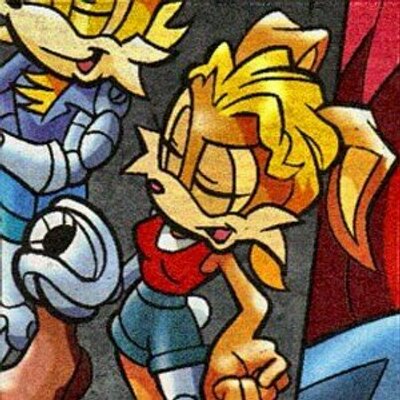 Oh yeah, we had a Jacques and Belle in Archie Sonic during the Mobius X Years Later saga. Difference between Family Life Mobius and Light Mobius when it comes to the characters? This isn't a world where Sonic and Sally are king and queen of Mobius. Anyways, back to the episodes and what not. That night, while in their room at home about to go to bed, Sonic and Sally talk, during which it turns out Sally has decided that she's ready to have a baby. Discussing it further, Sally assures Sonic that she's not forcing him to have kids with her and Sonic says that if they get on with it now, Antoine and Bunnie's kids will have somebody to play with. Deciding its time, the episode ends with Sonic and Sally turning out the lights as, you guessed it, they have an off-screen night of sex. 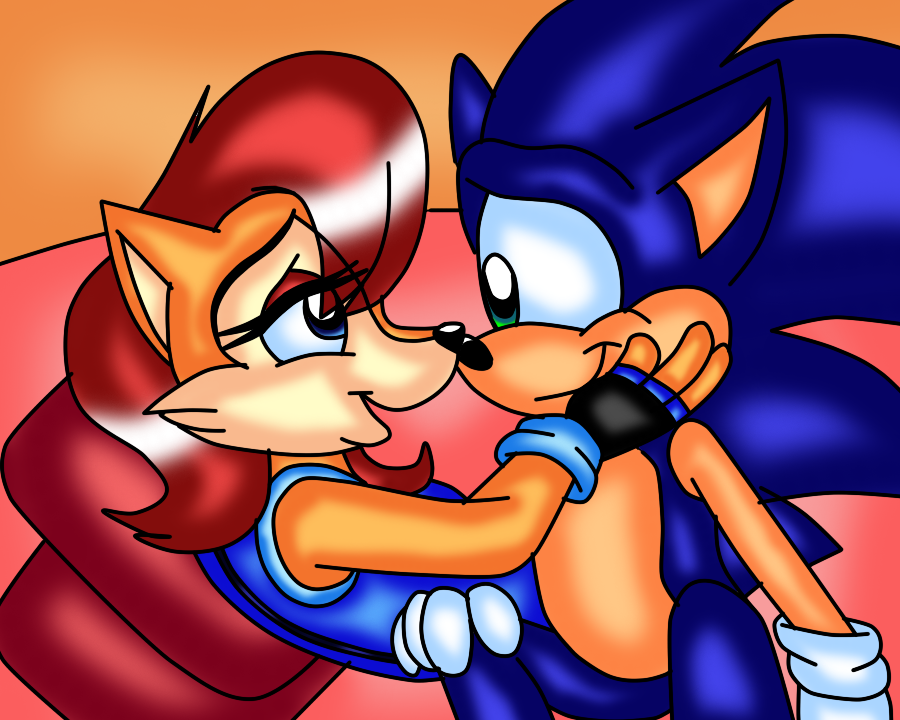 Episode 4 picks up in the morning after Sonic and Sally's night where, as Sally is washing up, we get another Unleashed reference as Sonic holds a stuffed doll of Chip aka Light Gaia before he goes out for a morning run. Once he returns from his run, he and Sally talk about if she's prego or not. Weeks later, Sally is experiencing sickness and is throwing up so Sonic takes her to see Doctor Quack (also a character from the Archie comics), who promises that Sally will be OK and that he will be glad to see if they are having a baby (at Sonic's request that is). A short while later, after waiting patiently, Sonic meets up with Sally, who tells him that she's prego, and Doctor Quack, who explains that morning sickness is due to the fact Sally is in the first phase of the whole thing.

Later, after discussing when they'll tell the others, Sonic and Sally give Sonic's parents a gift which happens to be a letter from Sonic, telling them they'll soon be grandparents. Bernie is super happy that her son is having a baby.
"My baby's having a baby?" *Cue fan-girl squeal*

Months later, Sally's belly is huge and the baby could come any time now. One day, Sally breaks down, concerned she looks fat and ugly, only for Sonic to assure her that she's still pretty. After Sonic heads out to go for a run, thats when Sally's contractions begin and Nicole, Sally's computer, has to notify Sonic (at Sally's request). Sonic has Nicole contact his friends and family about everything before rushing Sally off to the hospital.
At the hospital, Sonic is pacing up and down the halls, completely nervous, which also makes the doctors and nurses nervous as well to a point where one of them has to ask Jules to ask Sonic to calm down. Jules and Sonic have a man to man, father-son chat where Sonic says he's concerned that he might not be a great father. Jules, being optimistic, assures Sonic that he will be fine and that he and Sally are great with kids, considering the fact Sonic took great care of Tails. so of course Sonic will be a great poppa.

As we go into the room where Sally's in, at this point, we can see Sally can't stand the pain and wants it to stop. Sonic, knowing everything will be okay, tells her to not worry and they'll be fine. Sally goes through with it, it takes a while but finally, the baby is born and its a girl. Sonic and Sally see their newly-born daughter whom they name Kristina, Kristina Hedgeacorn. Sonic's family and the rest of the others come in, Uncle Chuck says that Kristina is adorable and Rotor, who's there with his girlfriend, says she looks just like Sonic. Sally's parents arrive and are amazed by how beautiful their granddaughter is. The episode ends with everyone happy, after Sonic learns Rotor will be tying the knot with his girlfriend sometime soon.

Episode 5, the as-of-this-post latest episode is simple. Sonic and Sally are raising Kristina, a few years after she's born, they decide to have another kid so Kristina will have somebody to play with at home. Sonic and Sally's next baby is a boy, whom they name Johnathon Hedgeacorn. Near the end of the episode, during Christmastime as everybody's opening gifts, Sonic learns that his wife is prego again and that they're expecting the next baby to be a girl. The episode ends with everyone happy about the news.

Thoughts/Conclusion:
Having seen JayFoxFire's talent and writing, I say this series is really good. In fact, if it could work, the whole thing could somehow fit right on in with the Sonic SatAM show, serving as an epilogue of sorts, kind of a "where are they now" scenario, showing Sonic and his friends dealing with a post-Robotnik life after cleaning up his mess he made during his decade long rule, maybe showing Sonic tie the knot with Sally and having kids with her or something.
Either way, this is a great series and almost feels like it is a part of SatAM, due to the intro and its music, the ending credits. even the voice actor voicing Sonic sounds like Jaleel White. The voice actress for Nicole also does a great job emulating Nicole's voice from the show.

Is it worth your time? Yes it is. If you have the time, go watch the episodes, one by one.
Anyways, time for me to go now, so until next time, here is a link to YouTube...
https://www.youtube.com/playlist?list=PLBAF831CCAD93B63B

Peace out!
-James M the CrazyGamerHistorian1999