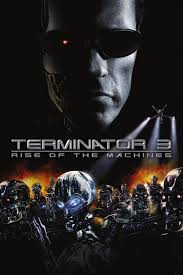 Following the success of Terminator 2, it would be 12 years before Terminator fans got another Terminator movie. James Cameron was not up to the task of doing another Terminator after T2, for him, T2 was it for the story. After the rights went from him to another studio, work on Terminator 3 eventually began. So whats the overall plot?

Its been a decade since the events of Terminator 2 and the Future War hasn't happened (yet), but after the passing of his mom Sarah Connor, John Connor (played by Nick Stahl) is living off the grid and is scared of his inevitable role of leader of the resistance. Living off the grid has benefits as machines from the future can't track him down. But thats about to change again, Skynet sends back another Terminator through time to eliminate John Connor's lieutenants. The new Terminator is a T-X, basically a female Terminator with shape-shifting powers just like the T-1000, only this time, her pollyalloy surrounds a metal endoskeleton and she's packed with weapons on board.

Upon arriving, the T-X attacks a rich woman, acquiring her clothes, her car and a gun from a cop before setting out to carry on with its mission of eliminating future resistance leaders as she picks them off one by one. Meanwhile, another reprogrammed Terminator sent from the future by the Resistance arrives. Its basically a T-850, part of the T-800 line, played by, you guessed it, Arnold Schwarzenegger himself. The T-850 pays a visit to a club where he acquires clothes from a stripper guy as well as some glasses before heading out to find and protect John Connor.

Not to far away, after getting injured in a motorbike incident, John visits a vet clinic to steal some pills so he can dosen the pain in his leg. Shortly after, Kathrine Brewster (played by Claire Danes) shows up, she happens to not only be the daughter of Robert Brewster (who is played by David Andrews), but an old friend of John from back when he was living with Todd and Janelle during the time frame of T2 before the T-1000 attacked. As they talk, the T-X arrives and attacks them, during the struggle, the T-850 saves John and Kathy. Kathy is locked in the back of a van which John uses as a get away vehicle. Seeing this, the T-X takes over several unoccupied cop cars and sends them after John before hijacking a crane and uses it to pursue.

The T-850 also pursues by stealing a motorbike from a cop. The chase goes through L.A, eventually ending with John being saved by the T-850 who takes over the truck and they get away from the T-X for now. As they drive along, John talks with the T-850 and is not only shocked to learn Kathrine B will be part of the resistance, but that the dark future is on the horizon, Judgement Day was not adverted, but merely postponed until Skynet comes online. To make things worse, the TX is advanced, rendering the T-800 models obsolete and the TX is an anti-Terminator Terminator.

Meanwhile, the TX, looking for Kathy, pays her boyfriend/fiancee/groom-to be Scott Mason a visit and actually murders him before impersonating Scott when the police come and visit him. The T-850, John and Kathy visit a maloseum in the Valley of Peace to obtain weapons from Sarah Connor's "coffin" which were left there just in case if the Future War was not adverted. The three of them narrowly evade a team of police enforcers, who were tipped off about Kathrine's whereabouts (which also notifies the TX about where she is.

During the encounter with the police, we bump into good old Doctor Silberman who hasn't changed much since T2, save for the fact he's now having doubts about if Sarah and Kyle's claims related to the Terminators weren't loony talk. As they get away from the TX, Kathy learns her (ex-) fiance is gone while the T-850 tells John that she's not just her second-in command but that Kathrine Brewster is John Connor's wife! As the trio prepares to find shelter from the nuclear war, John learns that Kathy's father is involved with the creation of Skynet and they make plans to try and stop the whole ordeal from happening... again!

Yup, after Cyberdine was destroyed during T2, what was left of it was taken over by the United States Military and Cyber Research Systems began working on advanced technology and actually worked on Skynet. So, despite the Resistance's best efforts to try and change history, the whole thing is gonna happen anyway. We kinda learn about a bit of it early on in the movie where Robert and his associates are contending with a nationwide virus (actually Skynet about to begin its attack) and are having doubts about if its time to activate Skynet. Now, with things about to hit the fan involving the Virus (while the TX infiltrates the base disguised as a millitary member to corrupt and reprogram the prototype robots), everyone decides its time to plug in Skynet, only for Skynet to "get corrupted".

Immediately afterwards, John, Kathy and the T-850 arrive and confront Robert about how to shut down Skynet, after encountering the TX who actually impersonates Kathy at first and then shoots Robert, about Skynet. As the wounded general states the virus infected Skynet, John tells him that Skynet is the virus and the reason everything is falling apart. At the same time, the Terminator prototype robots begin their attack, brutally gunning down those who could be a threat to Skynet. In his office, a barely alive Robert Brewster laments how he opened Pandora's Box and tells John and Kathy to head to Crystal Peak, leading them to believe Skynet's core is there.

After another encounter with the TX, during which the T-850 is briefly corrupted, John and Kathrine pilot a biplane to Crystal Peak and head inside the compound only to meet up with the TX, who followed them there, again as a damaged Arnold fights her one last time, allowing John and Kathy to get inside the bunker as the Terminator tells John, "We'll meet again."

Side note: The T-850 actually assassinated John on July 4, 2032 before being reprogrammed.

After ensuring that John and Kathy will survive, the brave machine destroys the TX and sacrifices itself at the same time by shoving a damaged fuel cell into the TX's mouth while saying "You are terminated" just as Sarah Connor told the T-800 just two decades earlier. The explosion decimates most of Crystal Peak but is enough to end the TX. Deep inside the bunker, John and Sarah are shocked to find not a core but a room for government and millitary officials dating back to some point during the Cold War.

It takes a while for John to figure it out as not long afterwards, a radio activates with somebody at Montana Civil Defense asking whats going on as there's a launch sequence. Accepting their fate as John and Sarah holds hands, John operates the radio and assumes command of the not yet established resistance. As an off-screen John Connor narrates everything, the movie ends with Judgement Day happening as the world engulfs in a nuclear war and we see whats left of the T-850 as John says, "The battle has just begun..."

Terminator 3 Rise of the Machines was a box office success and received positive reviews from critics back when it first came out, James Cameron even said it was great (despite his change in opinion and stance nowadays). Very few people hated this movie for different reasons, I actually liked it. Like the last two movies, Terminator 3 received an R rating despite its limited uses of the word "fuck" and very little blood, awkward considering the fact this movie wasn't rated PG-13.

Anyways, I give this film a 10/10 and with that, lets do Salvation.

Directed by John Brancato and Michael Ferris and released in 2009, Terminator Salvation is the fourth film in the Terminator series and is a shake up as we move on from the pre-Judgement Day times . In 2018, 14 years have passed since Terminator 3 and Skynet rules the world with its robotic armies even as the resistance fights to survive and defeat the machines. The pay off from so much build-up in the last three movies after seeing glimpses of the coming war is super worth it as we finally get to see the war between the human race and the Terminators. Chris Bale plays the role of John Connor, who is not yet the leader of the resistance, while Sam plays the role of Marcus Wright, a man who was converted into a human-terminator hybrid, an actual cyborg.

Kyle Reese appears in the movie in his teens, played by the remarkable Anton Yelchin. As for Arnold Schwarzenegger? He does show up and play the T-800 prototype, but not in the way you'd expect. The Schwarzenegger Terminator is played by Roland Kickinger, who stands in for Schwarzenegger and actually wears CGI make up so he could look like Schwarzenegger so that way, Arnold can be in the movie despite not being there as he was governor of California during that time. The end battle in the Terminator factory was amazing and well put together, the crew did a great job with the special effects and musical score, especially during the scene where the T-800 emerges naked and there's all this smoke and flashing lights going on.

We also meet Skynet for the first time, sort of, it kinda takes on the form of a scientist played by Helena Bonham Carter who showed up at the start of the movie. Salvation is also the first Terminator movie to be rated PG-13, theatrically that is, the Director's Cut is R-rated as it features a lot more action scenes and a small scene showing a partially naked Moon Bloodgood. Either way, Terminator Salvation is a fun watch just like Terminator 3 and is worth your time. If you have time, go ahead and watch either the PG-13 version or the R-rated version, your choice.

Salvation gets a 9/10 and. at last, I close out this double review.
See you later people.
-James M