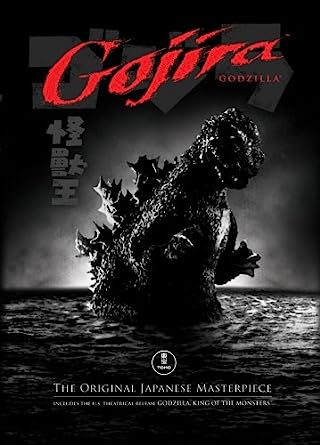 Heya folks, James M here and today, we will be talking about something classic, something incredible, something terrifying, the original 1954 Godzilla movie...

Nearly 65 years ago, in November of 1954, Godzilla first appeared on screen for the first time and, since that fateful day, he has become an icon in pop culture in Japan and across the globe, even though it would not be for 2 years until the 1956 Americanized version -Godzilla King of the Monsters- starring Raymond Burr as American news reporter Steve Martin hit theaters in America.

So how is this movie so special?
Its simple, Godzilla 1954 came out at a time when Japan was recovering from a terrible war that saw millions of lives brought to a "tragic" end and the beginning of the infamous nuclear age with the atomic bombings of Hiroshima and Nagasaki in August of 1945. In the years after the war as the nation was recovering, post-war films were a rare sight. One day, in the 50s, Ishiro Honda of Toho studios had an idea about what if a giant monster rose from the sea and terrorized Japan, this served as one of the many inspirations for the Big G.

Now what is the plot you may ask?
Allow me to give you, in my best attempt, a sweet and simple summary of the whole movie.

The film begins with a ship at sea and all calm until the ocean bursts into flames and the ship sinks, the crew lost but not before a distress signal was sent out. More ships sink and the Japanese government is pondering what is going on before heading to Odo Island, knowing the natives there might know what is going on. After arriving, it is discovered that the ship disasters are apparently caused by a monster beneath the ocean, a monster the Odo islanders refer to as their deity happens to have a name. The monster's name? Godzilla, no big surprise.

During the night, as a massive storm hits the island, disaster strikes as something lays waste to the village, resulting in many casualties and leaving very few survivors which include a boy named Kinchi who witnesses his family's life ending during the chaos. The next day, the survivors head back to Tokyo to report on the situation to the government. Not long after, a research party which includes paleontologist Dr Yamane and his daughter Emiko, including her boyfriend Ogata as well as Doc Yamane's now adopted son Kinchi.

Upon arriving on the island, the party explores the ruins of the surrounding area and discover everything to be contaminated with radiation, even discovering a trilobite, a prehistoric worm thought to have gone extinct a long time ago. Shortly after, the beast responsible for the destruction of the village and the demise of Kinchi's family appears over a mountain. A little side note; Godzilla's design is really impressive, super scary and fear invoking, Toho did a really good job with the suit and the special effects for the Big G himself.

After the group of explorers and islanders encounter Godzilla, he heads back into the sea but not before leaving behind footprints and Yamane snaps photos of the beast. Back in Tokyo, it is debated on whenether the existance of Godzilla, who's discussed origins date back to the dinosaur era, should be disclosed to the public and risk mass panic. Nonetheless, Godzilla's existence is released to the public and the millitary try to figure out ways to destroy the monster and prevent him from destroying Japan, despite Dr Yamane insisting that he mustn't be destroyed but studied instead.

One night, Godzilla comes ashore and wrecks havoc in the harbor area, even wrecking a train station, before heading back to the sea. The following day, evacuations of the Tokyo region begin as the government and the army devise a plan to try and end the threat of Godzilla -using electrical towers surrounding the city and the millitary at the same time, believing the ten thousand volts of electricity will actually be effective in defeating the beast. Yeah, good luck with that, I bet G's gonna walk right through the wires and get electrocuted, scream in pain, fall down and go kaput while the army bombards him with heavy artillery. LOL LOL LOL!

All sarcasm aside, the following evening, Godzilla comes ashore and, soon after, the plan goes south. Turns out, Godzilla is so invincible and so indestructible, the electrical towers and the millitary do jack squat. Godzilla burns down the towers with his nuclear breath, which actually looked like a spray of radioactive mist given how limited the technology to create nuclear fire back in the 1950s was, before marching through Tokyo and lays waste to everything. Another side note; the musical score is really awesome, helps set up the dark atmosphere and the tone when the big guy is destroying everything, gives you the feel that everyone is totally screwed.

After smashing through the city and leaving behind hundreds of thousands of people injured or about to kick the can, Godzilla heads back to the ocean, even as jet fighters try to knock him out. The next morning, Tokyo is in ruins and hospitals are flooding with people who barely survived the attack, almost reminds you of the aftermath of Hiroshima and Nagasaki, the power of nuclear bombs are dangerous after all, you do not wanna screw around with a country that has nukes.

While the situation is looking hopeless, it turns out there is a way to defeat Godzilla; the Oxygen Destroyer, a device invented by one Doctor Serizawa, a good friend of Ogata and Emiko. I kind of missed that Serizawa first showed up early on in the movie, being present when the research party was heading to Odo Island. Need we forget to mention he has an eye patch considering the fact he fought in the war? He even showed off the Oxygen Destroyer's power to Emiko, much to her horror, and told her not to tell anybody about it all.

Paying the doctor a visit, it takes a while to convince Serizawa, in the end, he agrees to use it, but he will use it only once as, if the Oxygen Destroyer were in the wrong hands, lets just say it would be a big disaster. So Godzilla's invincible against conventional weapons, nukes and electricity, can he be destroyed by a weapon as dangerous as a nuke or will he get away? Heck, as long as there are no lasting bad consequences for using the Oxygen Destroyer in the long run, we'll be fine... *cough cough* GODZILLA VS DESTROYAH *cough cough* MAJOR SPOILERS *cough cough*

Heading down to the depths of Tokyo Bay, Serizawa (temporarily accompanied by Ogata) finds Godzilla, who wakes up from his nap and goes to investigate whats going on, and detonates the Oxygen Destroyer. Hey, its working. Its actually doing the job. On the surface, on a ship, Ogata is with Emiko as all of it is happening and beckons to Serizawa to come back up. Below the ocean, Serizawa sends a final message to Ogata, telling him and Emiko to be happy together, before cutting the oxygen line so he can go down with Godzilla and take all of the secrets of the Oxygen Destroyer with him. 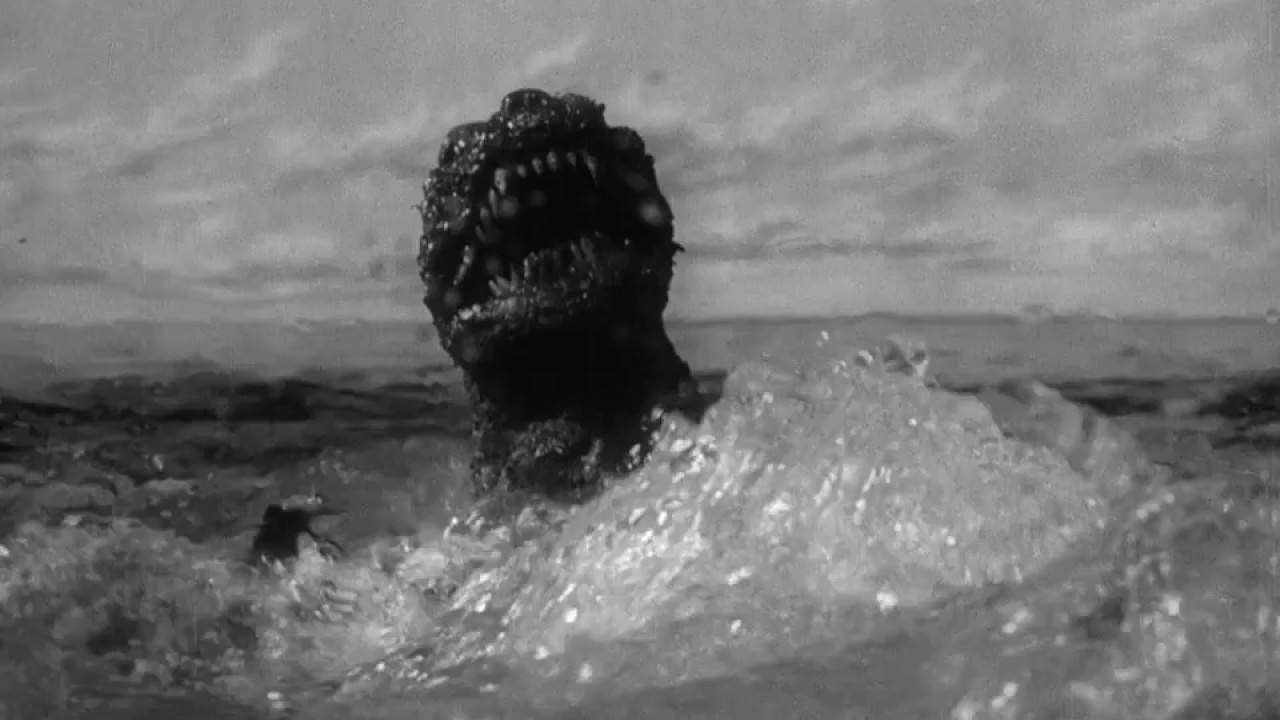 As the Big G faces his end, he surfaces one last time and lets out the most terrifying roar ever heard before sinking beneath the ocean, turns into a skeleton and vanishes without a trace, never to be seen again. So Godzilla is destroyed and the world is safe... at least for now. While everyone honors the loss of a great scientist, Dr Yamane, Emiko's father, comments that while they destroyed Godzilla, who seemed to be the last of his kind, there is a chance others of his species may still be alive out there in the world and, if nuclear tests keep happening, another Godzilla will rise again. The movie ends with a view of the ocean and the Japanese words for the end appearing on screen.

Godzilla 1954 aka Gojira or Godzilla King of the Monsters is a product of its own time (just like the 1984 classic The Terminator by James Cameron), the movie was so successful that a whole franchise began within years, spawning a direct sequel and many other movies (which including America's own takes on the Big G in 1998 and in 2014), a few TV shows, comic books and video games, even books. Godzilla's legacy will long be honored and remembered, as not just a movie or a character, but an icon, for all eternity, for years to come until the end of the universe.

As of this report, there are about 35 films in the franchise (about 29 or 32 if you don't count the American films and/or three anime movies), countless comic books and video games, even two TV shows, one by Hanna Barbara and a TV show that takes place after the events of the 1998 film. As we honor the Big G's six decade legacy, may we look forward into the future and not only continue to enjoy the big guy, but also understand the consequences of having nuclear weapons, the consequences of war and the tragic legacy it leaves behind, let us hope we do not repeat the same dark mistakes of the 20th century.