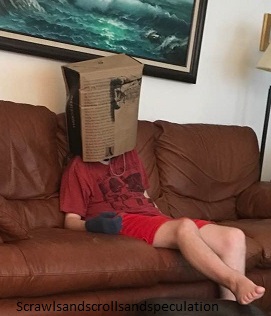 Do you ever have those days in which you just want to hide away from the world but you know you can't. My dreams tend to reflect what's going on in the back of my mind.   An interesting phenomenon took place in my dreaming world.  For the longest time, I've had the same type of dream in which I'm at a school or university library.   Sometimes I'm there visiting, other times living there.  I leave to go the store.  When I decide to return, I get completely lost and either find myself half way across town or lost in a maze, unable to get back to where I started.    Last night, the dream started out in much the same way.  But instead of trying to go back home, I began to explore the different stores, shopping, food tasting, and just meandering about. Hmm? I wonder what that says about my life?  Progress is happening!

While reading and outlining more of Fierce on the Page, I decided I'm more of a plotter than a pantster.  I began working on my very first story -  Floating on the Surface - way back in 2007 for NaNoWriMo.  Once I decided upon the goal of the story, I spent a month world building and creating characters, figuring out the setting, drawing pictures of streets and houses, and names of all the places in the town. Then wrote out a general outline of scenes. November came and I was ready to write.  I've done the same for most of my stories, except for Green Cross which didn't work at all before  I realized I wasn't a pantster. Truly, an experiment gone wrong, although I fell in love with the main character, Hunter.  He's shown up in two other stories, handing out clues left and right, which are part of his story,  but also part of Eyes in the Ashes and Blue Steel.  I don't think he's ready for his own story yet as he's highjacked, err, taken up residence in Eyes in the Ashes. He and I need to have a talk!