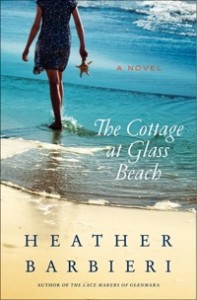 The Cottage at Glass Beach

Synopsis:  Married to the youngest attorney general in Massachusetts state history, forty-year-old Nora Keane is a picture perfect political wife and doting mother. But her carefully constructed life falls to pieces when she – along with the rest of the world – learns of her husband Malcolm’s infidelity. Humiliated, hurt, hounded by the press, Nora packs up her daughters, Annie, seven, and Ella, twelve, and takes refuge with her maternal aunt on Burke’s Island, a craggy spit of land off the coast of Maine. Settled by Irish immigrants, the island is a place where superstition and magic are carried on the ocean winds, and wishes and dreams wash ashore with the changing tides. Nora spent her first five years on the island but has not been back to the remote community for decades—not since that long ago summer when her mother disappeared at sea. One night, while sitting alone on Glass Beach, below the cottage where she spent her childhood, Nora succumbs to grief, her tears flowing into the ocean. Days later she finds an enigmatic fisherman, Owen Kavanagh, shipwrecked on the rocks nearby. Is he, as her aunt’s friend Polly suggests, a selkie, a mythical being of island legend, summoned by her heartbreak; or simply someone who, like Nora, is trying to find his way in the wake of his own personal struggles? Just as she begins to regain her balance, her young daughters embark on a reckless odyssey of their own, a journey that will force Nora to find the courage to chart her own course—and finally face the truth about her marriage, her mother, and her past.

Have you ever read a book, that when you are finished reading it, you want to turn around and read it all over again?   The Cottage at Glass Beach is one of these, but for a different reason.  I thoroughly enjoyed Heather's first book The Lacemakers of Glenmara,so was looking forward to reading it.  It's beautifulyl written and the story interesting, yet something was missing.  I did go back and reread the ending, felt like I missed something and started to reread the book again.  I was looking for more.  I wanted more, but more what?    The story hints at, teases you about magic and the selkies,  but leaves a lot to the imagination and doesn't really get into the history of the legend. Which leaves you wondering.....

Thanks to TLC Book Tours for asking me to be part of the tour, Harper books for providing me with a courtesy copy of the book, and Heather Barbieri for her imagination.  Check out the rest of the tour here.
at May 18, 2012