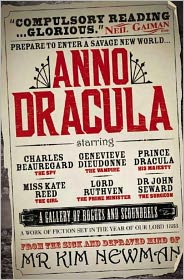 Back cover: "It is 1888 and Queen Victoria has remarried, taking as her new consort the Wallachian Prince infamously known as Count Dracula.  His polluted bloodline spreads through London as its citizens increasingly choose to become vampires.  In the grim backstreets of Whitechapel, a killer known as 'Silver Knife' is cutting down vampire girls.  The eternally young vampire Genevieve Diedudonne and Charles Beauregard of the Diogenes Club are drawn together as they both hunt the sadistic killer, bringing them ever closer to England's most bloodthirsty ruler yet."

My father in law called the other day and has recently gotten a kindle.  He is enjoying reading the classics and loves to discuss what he is reading with me.  The last time he called he asked what I was reading.  I explained I was reading a vampire novel in which Count Dracula has married Queen Victoria and taken over England.  It has made being a vampire fashionable and there are many characters who have turned or been brought back as vampires such as  Jack the ripper, Oscar Wilde, George Bernard Shaw, Professor Moriarty, Henry Jekyll, and Dr. Moreau to name a few.  Complete silence on the other end of the phone.  Certainly wasn't what he expected to hear.   *grin*
If you like vampire stories you'll like this one.There are many characters both fictional and historical who have been brought to life in the story as noted above.  It is quite fashionable to host a salon and have a vampire as the guest of honor.  Young female vampire prostitutes are being murdered by someone emulating Jack the Ripper.  Has someone unearthed the ripper and brought him back as a vampire....   Anno Dracula is a suspense story full of horror, politics, romance, deception and intrigue.  Kim Newman has quite an vivid imagination and put it to good use in this story.  There is a 2nd story called The Bloody Red Baron in which Newman imagines if Dracula had fought for the Kaiser during WW2.  Will be adding it to my wishlist.
Pages:  560
Publisher:  Titan Books
Reprint Edition May 2011
Source: Personal copy
at October 07, 2011