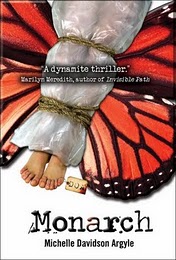 Back Cover:  Nick’s life as a CIA spy should be fulfilling, but it has only given him unhappiness—a wife who committed suicide, and two daughters who resent everything he has become. Now, stuck in the Amazon on the last mission of his career, he must track down Matheus Ferreira, a drug lord and terrorist the U.S. has tried to bring down for years. If he succeeds, he’ll have the chance to start his life over again.

Just when Nick is on the brink of catching Ferreira, he’s framed for a murder that turns his world upside down. His only chance of survival lies in West Virginia where Lilian Love, a woman from his past, owns the secluded Monarch Inn. He’s safe, but not for long…

Michelle Davidson Argyle's debut novel Monarch starts out intense and maintains it through the whole story.

"The blood pooling on the floor under the assassin’s back reminded Nick of butterfly wings. It spread from the twin wounds and sparkled in the sunlight filtering through the kitchen window.

The dying man’s words came between gasps. “I’m not the only one, Avery. The others will get you. Both sides.”

Nick raised his pistol and aimed between the assassin’s widened eyes. A muffled pop from the silencer and it was over."

Nick is on the run and the only place he can think to go is Monarch Inn owned by Lillian and her son Devan.  Little does he realize his enemies will stop at nothing to get to him.  His daughters are in danger and he needs to help them.  Lillian agrees to let him bring them to the Inn for safety sake while he goes to Brazil to track down the drug lord who is trying to destroy his life.


The characters are well drawn, far from perfect and Michelle does an excellent job of portraying them with all their flaws which blends perfectly into the story, helping to create the story.  There was an interesting symbolism to the story with the butterflies. They are an integral part of the story and like butterflies the characters metamorphisized, grew into their skin.


From the mountains of West Virginia to the forest of Brazil, the action is fast paced and the twists and turns will keep you reading long into the night.  Once you start reading it, you won't want to put it down. And once you finish it, you'll want to turn around and read it again.

Thank you to Michelle and Rhemalda Publishing for providing me with a courtesy copy of the book.  I also have one copy to giveaway, courtesy of the publisher to one of my lucky readers.  The giveaway is open through the end of the tour October 15th and available to u.s. and international readers.   Please leave your name and email address in the comments and the winner will be picked via random.org.

Pages:  341
Publisher: Rhemalda Publishing
Released: September 15th, 2011
Check out the Monarch Blog Tour and see what others had to say about Monarch and more opportunities to win a free book.