Review plus giveaway - The Silver Eagle by Ben Kane 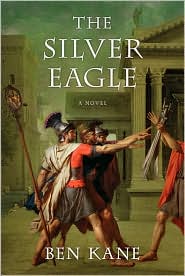 The Silver Eagle
By
Ben Kane


Book Synopsis:  They fought against almighty odds at the very edge of the known world--and lost.  Ten Thousand legionaries are all that are left of a once powerful Roman Army.    In the first century B.C., trapped in Parthia by Crassus's failed invasion, the legionaires that survived are captured and marched to the edge of the known world.  Among them are three friends, Brennus the Gaul, Tarquinius the Etruscan soothsayer, and Romulus, a runaway slave and the bastard son of a Roman nobleman.  All men with troubled pasts and united in their hatred of Rome, they never stop dreaming of freedom.  Together they must face the savage tribes that surround them, as well as the more treacherous enemies within the ranks of the legion itself.  Their character will be tested to the utter limit as they struggle to find a way back to Rome.
Meanwhile, Fabiola, Romulus's twin sister, tries to maintain hope of her brother's survival with fighting for her own.  Freed by the powerful Decimus Brutus but beset by enemies on all sides, she must travel to Gaul to find her lover, the right hand man of Julius Caesar.  But in Gaul, Brutus is fighting for his very life against Vercingetorix, whose rampaging army threatens to destroy all who rally around Caesar.
Together these characters, whose lives are intertwined and whose stories are interwoven, bring to life a truly epic tale of the late Roman Republic and the ancient world in which it thrived.

The Silver Eagle is book # 2 in Ben Kane's historical fiction forgotten legion series and continues where The Forgotten Legion leaves off.  The three friends are now part of the Parthanian army.  The Parthian commander Pacorus is constantly testing Tarquinius soothsaying abilities, just waiting for him to fail.  When Pacorus and a detail including Tarquinius, Brennus and Romulus are ambushed and only the three men return to the fort with Pacorus near death, their lives are on the line.  If Pacorus dies, they will all be executed. No one in the Parthanian army trust them, especially when they discover Romulus is a runaway slave. The men are forced to watch their backs at all times, even while in battle with the enemy, to avoid being killed by the men in their legion.  Meanwhile Fabiola, who has been managing Brutus's estate, her life is threatened when she tries to protect a hunted slave from Scaevola, a vicious slave hunter. Suddenly he is determined to kill her and she is on the run to find Brutus, who is fighting in Gaul alongside Caesar.
Just as riveting and well written as The Forgotten Legion, you will be drawn into the world of the 4 lead characters.   The Silver Eagle has a little bit of everything - mysticism, battles, betrayal, friendship, and politics.  The story continues in book 3 The Road to Rome.   I highly recommend it.
Thank you to Ben Kane for writing such an interesting, engaging story and to St. Martin's Press for providing me with a courtesy review copy of the book.  They kindly sent a copy for me to giveaway to one lucky person.   The giveaway is open to U.S. Residents (no p.o. boxes please) through July 13th.   Please leave your name and email address in the comments section. The winner will be picked via Random.org.


Pages:  480
Publisher:  St. Martin Press
Released:  March 2010 (hardback)  March 2011 (paperback)
Other thoughts:
Gaby of Starting Fresh:
" Ben Kane anchors the story in much historic detail which gives The Silver Eagle an added layer of depth and complexity."
Fantasy Book Review:
"The Silver Eagle is a very brave second book; it does not simply attempt to recreate the winning formula of the first book but introduces new elements that see it move away from traditional historical fiction and into areas that could divide its existing fan base."
at July 06, 2011