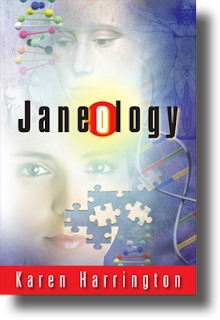 Book synopsis:  "When mothers kill their children, people want to know why.  People want to know how it happens under the watchful eyes of the loved ones who lived by their sides. So, when Jane, loving mother of two, one day does the unthinkable and drowns their toddler son, her husband Tom is devastated.
When a prosecutor decides Tom is partially to blame for her son's death and charges him with "failure to protect," his attorney proposes a radical defense:  he will create reasonable double about Tom's alleged guilt by showing that Jane's genealogy is the cause of her violence, that Jane inherited her latent violence the way one inherits a talent for music or predisposition to disease.  Thus, he will argue, no one could predict or prevent the tragedy, as it was merely waiting to emerge.
Aided by a woman with the power of retrocognition--the ability to see past events through objects once owned by the deceased--the dark-biology theory takes form as we meet eight of Jane's colorful ancestors, spawning decades and continents."

In this debut novel about love, loss and family legacy, Karen Harrington deftly illustrates the ways nature and nurture weave the fabric of one woman's life--and renders a portrait of one man left in its tragic wake."

I've been following Karen for quite a while now and really wanted to read her book, but had some trepidation about it, because of the subject matter.  The stories in the news like Susan Smith and other women who have killed their own children have always been hard to stomach, especially when you have children.  I was fortunate to win an autographed copy  and I finally sat down to read it the other day and was surprised and hooked. It wasn't at all what I expected.

The story starts after the tragedy and Jane's trial.  It is told from Tom's point of view and his grief and guilt have driven him to drink.   His lawyer, intent on helping Tom prove he is innocent of all wrong doing and had no clue his wife could do such an act, brings in a psychic who just happens to have some connection to Jane's family.   She can touch items and read their history.  We are taken back through history, step by step, backwards through various time frames from 1976 when Jane was just a little girl back to 1895 to Jane's great grandfather.  The stories of Jane's ancestors are riveting, providing a trail that could explain how Jane could have done what she did.  The ending leaves you wondering with Tom's fate in the hands of the jurors.


Janeology is excellent, will keep you riveted, plus gets you thinking about our genetics and if our ancestors past actions really do affect our current actions.   I highly recommend it.  It's one of those books, that once you start it, you won't want to put it down.  Karen is currently working on a follow up to the story about Sarah, Jane's daughter "An Ordinary Girl"  and growing up in the shadow of her mother's murder of her twin brother.  To find out more about Karen and her writings,  check our her website, Scobberlotch.

Carrie of Books and Movies:
"I was immediately hooked, and while the subject matter is disturbing, the way Ms. Harrington chose to tell the story distances the reader a bit from the crime itself – not enough to make reading the story an unemotional experience, but enough that loving parents could read it and not be too horrified to continue."
Jen at Devourer of Books:
"I think it is a fantastic story of family, dysfunction, pain, and the realization of how our actions effect other people."
Literary Feline at Musings of a Bookish Kitty:
"Janeology is an intense and emotionally charged book that threads together family history to show one possibility of causation. Never in the novel did the author suggest this as an excuse for such behavior, only an explanation of how it might have led to such a tragic consequence."
at July 02, 2011