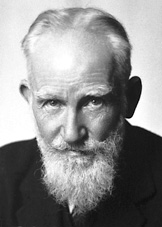 I had mentioned previously that my subject for my Humanities Capstone class final project was George Bernard Shaw. The title of my paper was George Bernard Shaw – separating Fact from Fiction. There were so many directions I could have gone because he was just such a prolific writer and speaker.  Plus with his involvement in the Fabian Society, with Stalin and supporting Hitler, his socialist beliefs, ideas about Eugenics, his belief that he was a feminist, his personal life, etc.
I was first introduced to Shaw during my Nobel Literature class. I didn’t know much about him except for the fact he was insulted by the prize and wanted to reject it. His wife made him accept it, but he did reject the money portion of the prize. He’d written a great number of plays which I hadn’t heard of or seen yet.
One of the discussions we had during class was that some people think that anything an author writes reflects their lives, their ideas and feelings. The author is the narrator. It isn’t necessarily true. For the most part the author is separate from their writings. They are the creator but the characters do not reflect them. They write from their imagination and it’s possible to throw yourself into the story and be entertained. Then you have authors who have an agenda. They have such strong beliefs about something that is permeates their writings. They are the narrator. It’s impossible to separate fact and fiction.
After that class, I happened to see a historical documentary that highlighted some statements Shaw made in support of Hitler and he made statements about killing off those people who were of no use to society. Because of the way he spoke, with his lighthearted lilt and tone and smiling face, I didn’t think he was serious. And I thought he was being taken out of context, so I did a bit a research and found out he was absolutely serious. He had a way about him, a mocking wit, which when you realize he was serious, made you realize how dangerous he was if anyone listened to him.
Shaw was a socialist and everything he wrote dealt with some sort of moralistic issue. He was very verbose and thought no one was as intelligent as him.    He felt it necessary to include a preface with every one of plays in order to explain exactly what the play was about and tell people this is what you are to think. He was that arrogant.
He called himself a feminist and a big believer in women’s rights, yet his attitude didn’t reflect that. Neither did his plays. He struck me as being very misogynistic.   He was very callous when it came to women and many of his male characters in his plays reflected that. In reading Shaw’s plays, reviews and words, it is very evident many of his works are autobiographical. Shaw, though he called himself feminist and said he believed in woman’s rights, most of his plays involving woman showed them in a position beneath men. He seemed to have little respect for woman portraying them as prostitutes, adulterers, lacking morals; poor and illiterate.
The characters emulated his thoughts and feelings, his politics and socialists ideals. However, he wrote in such a way, using comedy to get his point across. Without it, according to Pers Hallstrom in his presentation to Shaw during his Nobel literature prize presentation, folks probably would have tried to kill him instead for his mockery of life.

“What puzzled people the most was his rollicking gaiety. They were ready to believe that the whole thing was a game and a desire to startle. This was so far from being true that Shaw himself has been able to declare with a greater justice that his careless attitude was a mere stratagem. He had to fool people into laughing so they should not hit upon the idea of hanging him.”

His plays seemed to mirror his life.  He was married for 40 years to Charlotte Townsend, who was also involved in the Fabian Society. However, the marriage was never consummated and they slept in separate bedrooms. She was afraid of having children, and he didn’t care so was fine with the arrangement. He had a rather passionate correspondence affair with another woman, the actress who was given the lead role in the play Pygmalion.
Speaking of Pygmalion, The lead character Henry Higgins was a confirmed bachelor who preferred hanging out with Colonel Pickering more than anyone else. He treated Eliza horribly. Shaw was disgusted when everyone who saw or read Pygmalion considered it a romantic comedy and assumed that in the end Eliza and Higgins got together. He wrote a sequel to the play which is included in the book, taking great efforts to explain they did not.
Father and I had quite a few discussions about Shaw and we both have come away with the idea that Shaw was a contradiction in terms. He swore he loved women, yet treated them carelessly and with disdain and portrayed them in his plays as prostitutes, adulterers, mindless and easily swayed, or poor and ignorant.
We both had the impression,  and other people have posited this as well, that Shaw was a repressed homosexual. Which, for him would have put him in grave danger, due to his dealings with Stalin, Hitler, and eugenics. Father thought it would have been an interesting issue to address, but it would have meant a lot more research and totally rewriting my paper, so just didn't go there.
It would be interesting for someone to study Shaw and his writings from a psychology, feminist or GLBT literary theory standpoint and see what they discover.  Great idea for thesis.
My ultimate goal when I had decided to do this paper on Shaw was to learn more about him.  Did I achieve that goal?  You bet.  However, the more I found about him, the less I liked.
Shaw used his work to further his political agenda. He did so through his plays, books, and essays. It was impossible to separate the man, the author, from the fictional characters in his plays. He caused a great deal of speculation and most people took his plays at face value, rather than being led by his words. Folks weren’t as feeble minded and as easily led as he thought.
What leaped out at me while researching George Bernard Shaw was that though he was very talented, he was to put it more simply, an arrogant, dangerous blowhard.  I'm sure there will be some that disagree and that's quite all right.  It is after all, my personal opinion.
at June 29, 2011