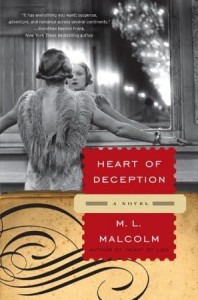 Heart of Deception
by
M.L. Malcolm

Back Cover:  "Leo Hoffman is a man of many contradictions.  He is a Hungarian national with a French Passport, a wealthy businessman with no visible means of support, and a devoted father who hasn't seen his daughter in years.  He is also a spy.   Recruited by the Allies to lay the groundwork for their invasion of North Africa, Leo intends to do as little spying as possible; he just wants to earn his American citizenship, get to New York, and find his daughter, Maddy.  But while Leo dodges death in France and Morocco, Maddy learns the truth of her father's mysterious past, and this haunting knowledge compels her down a dangerous path of her own, into deception and discovery."

Heart of Deception is the sequel to Heart of Lies and continues the saga of Leo Hoffman as he works to earn his citizenship, working as a spy, playing one group against another group against another group.  None know whether to trust him or kill him. His fate is left up in the air and he is stuck in Cairo while the powers that be concentrate on more important issues: the invasion of North Africa by the Brits and Americans.  Meanwhile his daughter Maddy is taken in by her belated mother's sister who encourages her to be anything she wants, except a faithful daughter to Leo.  She refuses to read any letters Leo sends her, believing he has completely abandoned her and is lying about being a spy.  Her heart's desire is to be a pianist but her aunt expects more out of her.  Maddy falls in love with two very different men who lead her in two directions.
The story takes you from 1942 to 1960 alternating between Leo in various countries and Maddy in America.  The historical aspects are more backdrop in the story and the focus is more on the characters and their actions.  There is plenty of intrigue and deceit, but also moments the characters will frustrate the heck out of you by their decisions.  Heart of Deception will stand alone but I think you'd enjoy it better if you read Heart of Lies first. (review here)