Welcome to the first stop on the TLC Book Tour for  M.L. Malcolm's debut novel:
Heart of Lies 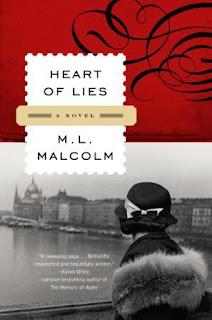 Back cover: "Meet Leo Hoffman, a dashing young Hungarian, born with a gift for languages.  After his dreams for the future are destroyed by WWI, he attempts to use his talent to rebuild his life, only to find himself inadvertently embroiled in an international counterfeiting scheme.  When he discovers he's wanted across the European continent for a host of crimes including murder, he escapes with his love to Shanghai, taking with him a stolen treasure that will prove to be his salvation or his death warrant.  But he soon learns that the gangsters who control the decadent city do not intend to let him outrun his past, and when the Japanese invade, one wrong move costs his everything he holds dear.  Inspired by the author's family history, Heart of Lies is an epic tale of intrigue, passion, and adventure, and heralds the debut of a remarkable writer."


Heart of Lies is a well written historical novel that draws you into the life of Leo Hoffman.  He is hired to go to Paris and be an interpreter for a group of influential powerful men.  One of the men, Karoly, the chief of police of Budapest asks him to do a personal favor.   Go into Cartier and buy his mistress a certain necklace for him.   He can't turn down the chief of police, so he agrees. While he is exploring the city, he runs into Martha, a beautiful young woman whom he falls in love with instantly and spends the night with her.   He is shocked when he reads in the newspaper the next morning that one of the men was arrested passing counterfeit bills.  He realizes the money Karoly had given him to buy the necklace was fake.  Life gets complicated really fast and he has to leave the country, leaving only a note for Martha that he will send for her in six months.  If you want to know what happens, well you'll just have to read the book.  The story is full of suspense, twists and turns, deceit, romance and surprises.  Once you start reading, you won't want to put it down.  The sequel, Heart of Deception (originally published as Deceptive Intentions) is being reissued next year and will continue Leo's story.  I look forward to reading it.
Be sure to check out the rests of the stops on the tour:
Wednesday, June 9th:  I’m Booking It
Thursday, June 10th:  Books for Breakfast
Monday, June 14th:   Diary of an Eccentric
Wednesday, June 16th:  Rundpinne
Tuesday, June 22nd:  Raging Bibliomania
Wednesday, June 23rd:  Peetswea
Monday, June 28th:  Heart 2 Heart
Tuesday, June 29th:  Chefdruk Musings
Wednesday, June 30th:  Dolce Bellezza
Thank you to TLC Tours for inviting me to be a part of the tour, M.L. Malcolm for writing such an interesting book and the publisher for providing me with a courtesy copy.

M. L. Malcolm is a Harvard Law graduate, journalist, recovering attorney, and public speaker. She has won several awards for her short fiction, including recognition in the Lorian Hemingway International Short Story Competition, and a silver medal from ForeWord magazine for Historical Fiction Book of the Year. She has lived in Florida, Boston, Washington, D.C., France, New York, and Atlanta, and currently resides in Los Angeles.
at June 07, 2010