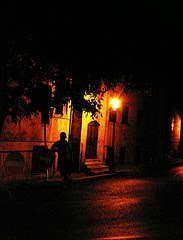 Today I have a treat for you. Father was reading my Writer's Digest  magazine and the Your Story Writing prompt generated quite a few sparks with him. He came up with a short story which he has given me permission to share with you all.

The prompt: During your weekly housecleaning you find an unfamiliar cell phone in the cushions of your couch--but can't recall having any recent visitors. It rings.

Home at last. The dreaded red eye flight was three hours late. I haven’t slept in over 24 hours and something is wrong…very wrong. Where are my cats? They usually swarm at my feet, talking and trying to trip me as I head towards my bedroom.
A fleeting moment of relief comes as I find the little furry creatures hiding under the bed.  Then it hits me…Am I alone?  A quick check reveals nothing and then my cats greet me in their usual way.  All is normal.
The next morning is overcast and despite cleaning the house before my week long business trip, the overwhelming desire to clean it again over takes me.  Then I find it, under the couch cushion.   An intruder’s cell phone.  Sweat fills my palms as my stomach ties itself in knots.
It rings….Beethoven’s 5th symphony.
“Hello?”
“Look behind your refrigerator princess. Use extreme caution.  Don’t be followed. Remember life is precious.
”Gulp!"
What a mess!  It’s filthy back here. Dust, spider webs. Nothing.  Wait!  What’s this?
An envelope. Inside a key with a scrap of brown paper.  “Kalifornia regretfully” faintly scrawled on it.
Across the world, 42 years ago, a man walked in solitude along a wooded trail.  The early morning’s serenity was shattered when he exclaimed “What the…”  Followed by the delayed report from an assassins 30-06 rifle. Traveling faster than the speed of sound, its 174 grain match grade bullet barely hit its mark.   Entering his lower back, it burst his intestines out, like popping a water balloon.  Moments later came the deafening boom crack sound sending 100’s of birds into frenzied, panic driven flight.
Mortally wounded the victim’s survival mode kicked in.  Get out!  Run!  Survive! Get cover!  Both natural instinct and years of training instantly called into action.  Despite the fact his body absorbed enough kinetic energy to lift a walrus in the air, some 2700 foot pounds, he is still able to run and think.  It is a hunter’s worst nightmare – Gut Shot!  Holding his innards, he runs 50 yards before he falls behind some bushes.    He thinks he must “keep himself together.”  Then thoughts turn to prayer and his daughter…  He must hold on.
The assassin follows the trail to find the man clutching a photograph.
“Please take care of my precious.”
The silhouette standing over him nods in agreement.  Prayers answered, he resigns to the inevitable.  Another causality of the cold war.  The assassin reaches down and takes the victim’s watch, wallet and the photo.  A microdot is subsequently removed from the watch. Mission accomplished.  For reasons known only to him, Alex failed to place the wallet and photo into the incinerator as prescribed by protocol.
What is this key for?  A check into the mystery cell phone reveals only one phone number…to a bank!  California Gold bank, known as CGB.   Safe deposit box perhaps? “Do it now!   But do not be followed…  On my God.  G.P.S.!  Remove the batteries from the cell phone!”
The 15 minute drive downtown is uneventful except it seems everybody is following me.  “Paranoia will destroy ya…This song envelopes my mind. There is no switching it off.  Besides nobody in their right mind would follow me in that mustard yellow 70’s AMC pacer. Or would they?  Great! Pacer is gone.
I never felt like a spy until I entered the bank.  My father died when I was eight years old. He was MIA.  Thoughts of my father vanished when I saw my perfect signature on the bank forms. How is this possible?
The bank box contained priceless treasure.  A rust stained wallet and a photograph from when I was 8 years old. “I love you daddy.  Love your precious princess.” barely legible on its back.  The wallet must be dad’s!   The safe deposit box also contained a brownish oil soaked wax paper covered package.

In 1989, the Berlin Wall and KGB agent Alexander Krotov ceased to exist.  Switzerland acquired a new model citizen – Helmut Schmidt. Friends say Helmut’s spirits lifted greatly after his trip to the USA.  Six months later, he passed away peacefully in his sleep.  His five year battle with cancer finally over.
Viewing the contents of the safe deposit box brought immediate relief, so why all the fear?  My attention focused on the package. Peeling back the water proof wrapping, the musty smelling package revealed its inner contents.  Leaving me to ponder the life changing question:   What does one do with one cup of flawless investment grade diamonds?

So his story begs the question, what would you do with one cup of flawless diamonds