Welcome to the Days of Prey Blog Tour to celebrate the release of John Sandford's latest book, Storm Prey which will be released May 18, 2010.  You'll notice my review is a tad bit different than usual.   As part of the celebration, all 20 books in the series are being reviewed in order, each reviewer discussing one book in the series, starting with Rules of Prey and ending with his newest release, Storm Prey.  Each reviewer will be answering the same 20 questions in order to give you a chronological view of Lucas Davenport and the stories.  I read the The tenth book in the series: 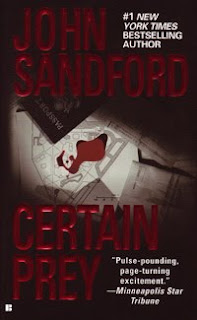 Back Cover: "To whom does a beautiful and ambitious attorney turn when she needs a romantic rival eliminated?  Nowhere better than a beautiful and equally ambitious hit woman.  Trouble is, Lucas Davenport is on to both of them---and now it's his turn to be the prey."

Title and series number of the book you read:   Certain Prey is the 10th book in the series.
Year Published:  Hardback May 1999, Paperback  March 2000
Tell us about Lucas Davenport:

"Lucas was tall, lean, but not thin, broad-shouldered and dark-completed.  A scar sliced across one eyebrow onto his check, and showed as a pale line through his summer tan, like a vagrant strand of white thread.  Another scar showed on the front of his neck, over his windpipe, just above the V of his royal blue golf shirt.  He took a .45 in a clip rig out of his desk drawer and clipped it inside his pants, under his jacket. He did it unconsciously, as another man might put a wallet in his back pocket" (pg 21)

What is Lucas doing when he first appears in the book?


Lucas is sitting in his office at the police station peering glumly at a 600 page (he's on page 7)  report called "Mayor's Select Commission on Cultural Diversity, Alternative lifestyles and other abledness in the Minneapolis Police Dept: A Preliminary Approach to Divergent Modalities"  when Sloan runs into his office to tell him  one of the officers has been shot.


Give us a sense of time and place:  Summertime, sometime in June in Minneapolis. It's warmish.
Lucas’s occupation or professional role?   He is the Deputy chief of police.
Lucas’s personal status (single, dating, married):   He's single and has just ended a six week romance with one of his detective's -  Marcy Sherrill.  Must have been interesting because she referred to their romance as "Forty Days and Forty Nights of Sex and Disputation."   They still have to work together though, so its slightly uncomfortable for the two of them.
Lucas Davenport is a known clothes-horse; did you notice any special fashion references?  There weren't too many references to his clothing.  When Lucas is introduced he is wearing a Navy Blue silk jacket with a royal blue golf shirt. Later one he is wearing a dark blue suit. It seems he likes blue.
Let’s talk about the mystery -  Avoiding spoilers, what was the crime/case being solved?   A prominent female attorney, Carmel Loan is attracted to married attorney Hale Allen. She decides to get rid of the competition and and hires a hit man.   The hit man is actually a hit woman, Clara Rinker.  The hit goes off smoothly and Carmel gets her man, but unfortunately for her, she makes Hale nervous.  He isn't too terribly bright but senses something is weird and talks to Lucas.  In the meantime, Carmel is blackmailed by the  person she used to hire Clara.   Carmel and Clara bond over the killing of Hale's wife and subsequently join together to solve all of Carmel's "problems."

Does the title of your book relate to the crime?  Yes, it does.  The hit woman is hired to killed certain people.  She stalks them, learns their routines and plans how best to kill them.


Who was your favorite supporting character, good or evil?   I actually liked the hit woman, Clara Rinker.   She was an interesting character - young, smart and beautiful.  After she coolly kills the man who raped her when she was 17 years old, the mafia hires her and grooms her to be a hit woman.  She is good at what she does and when she start making a lot of money, decides to go to business school.   She's a hit woman with a conscious and doesn't like to inflict pain. She doesn't do torture, unlike Carmel who loves to inflict pain.  She is quick and precise.   She and Carmel together sort of take over the story and the two of them are quite a pair.


What was your favorite scene or quote?  There are quite a few scenes that had me giggling, however they aren't printable.   One scene that had me laughing was when Lucas had to drive to Wichita but didn't want to take his Porsche.  He took it in for service and requested a BMW that was on the lot to drive instead of the available Volkswagen.   The front  hood latch was next to the brake and his foot keep hitting it. He had to pull over a few times before the dealer told him about the latch.  Then....


"Thirty miles out of town, a yellow light popped on the left dash that said check engine, and he took it to the side again, fearing that he was about to blow a rod. He was still within cell phone distance, and he called the dealer again, who said the light meant that the emission system wasn't working right. "Don't worry about it; it doesn't mean anything."

"On any other car, check engine means all your oil just ran out on the road," said Lucas.

"That's not any car," the Porsche guy said.  "When the oil runs out on the road, that one says "STOP!" in big red letters."

"So the light's gonna be on all trip?"

"That's right, pal. You wanted it, you got it" the dealer said, without a shred of sympathy."

"The windshield's not quite right. We're gonna try to reseal it when you get back."

"What do you want for sixty-nine thousand?" the Porsche guy asked. "You shoulda took the Volkswagen."

Finally, how do you envision Lucas Davenport?If he were to be portrayed in a movie, what celebrity would play him?   Actually I envision him as a young Paul Newman or Harrison Ford.   But I could possibly see Hugh Jackman or maybe Edward Norton playing his part.

Certain Prey is the first book I have read by John Sandford and I thoroughly enjoyed it. He has an interesting writing style - very comfortable.    From the very beginning, you know who the villains are or in this case, villianesses are and it was very interesting to see how the whole story played out.  I'm looking forward to reading the rest of the series and his newest novel "Storm Prey."   Thanks to TLC Tours and the publisher,  I am giving away an Advance Reader Copy of Storm Prey, plus a copy of Certain Prey. The giveaway is open until the end of the tour on May 18th and is open to all U.S. and Canadian residents.  Please leave your name and email address in the comments.  The books will be shipped directly to you from the publisher.

Check out the Penguin Group site  where you can find an excerpt from each of the books and stop by the tour stops to find out more about the books and for a chance to win Storm Prey.

FTC Notice: Thank you to TLC tours and the publisher for sending me a courtesy copy of the book in order to be part of the tour.  I did not receive any compensation for my honest unbiased review
at May 07, 2010