Flag Retirement Ceremony
During the pack meeting last week, we had a flag retirement ceremony.  I have never attended one before and have to say it was an emotional moment.
"I AM OLD GLORY"
"I am old glory; for more the 9 score years I have been the banner of hope and freedom for generation after generation of Americans. Born amid the first flames of America's fight for freedom, I am the symbol of a country that has grown from a little group of 13 colonies to a united nation of 50 sovereign states. Planted firmly on the high pinnacle of American Faith, my gently fluttering folds have proved an inspiration to untold millions. Men have followed me into battle with unwavering courage. They have looked upon me as a symbol of national unity. They have prayed that they and their fellow citizens might continue to enjoy the life, liberty and pursuit of happiness, which have been granted to every American as the heritage of free men. So long as men love liberty more than life itself, so long as they treasure the priceless privileges bought with the blood of our forefathers; so long as the principles of truth, justice and charity for all remain deeply rooted in human hearts, I shall continue to be the enduring banner of the United States of America" 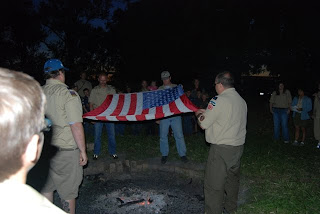 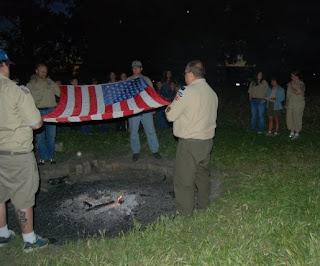 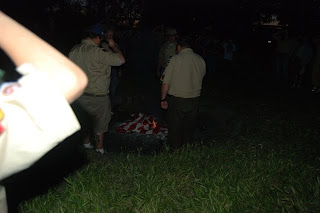 "Our Flag is a symbol of our country.  Have you ever stopped to think what the flag really means?  The Blue in our flag stands for valor which our ancestors fought and died for in the many battles that have been fought for our country and all for which it stands.   The White stands for the purity in all of our hearts.  It also represents the honor that each of us show in all that we do in our everyday lives.   The Red stands for the courage of all the men and women who have died in the service of our country, both as members of the armed forces and as everyday citizens.  Our flag has gone into every battle into which there have been United States citizens, from the American Revolution to the Civil War, to WWI, to WW II to the Korean Conflict to the Vietnam War to the Desert Storm.   In all of these, we the American people have stayed true to the values that the Flag represents. We should always value the sacrifices that have been made for our flag and the country that it represents.

We have an old friend here who has fullfilled his duty to our country.  He has become worn and tattered and we are here tonight to retire him with honor.
We shouldn't be sad about the retirement of our friend.  We are not burning him in anger, we are only releasing his spirit so that he can continue to serve us in our thoughts." 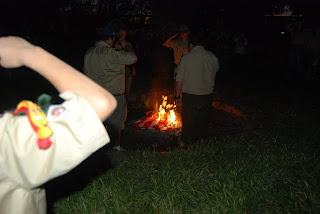 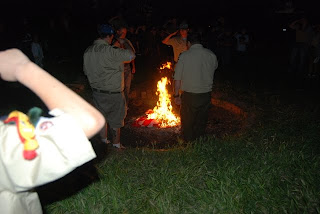 The US code title 36, section 176 states: "The Flag, when it is in such condition that is is no longer a fitting emblem for display, should be destroyed in a dignified way, preferably by burning."
at May 19, 2010