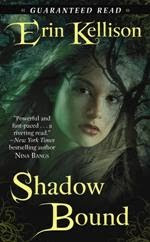 I came across Erin Kellison's debut novel Shadow Bound on Shelf Awareness and captured by the cover, checked out her website and decided to request it.  Received it Saturday and this morning I finally got to sit down and start reading it. -- sweet!   Thought I'd share the first page to give you a glimpse.

"A light in deepest Shadow.

The fae lord pulled his cloak around his face to dampen the intensity of the glow. Futile.  The woman was still there, in his mind, shining like molten gold.  The heat of her soul-fire penetrated the veils between the mortal world and Twilight and slid across his skin in a caress. She, the sun, powerful enough to quicken even him.

From his dark vantage, he peered into her room.  Her bed was made, pillow undented.  He'd come too early to ride the rough waves of her dreams, to mellow her sharp knocks of pain and worry so that she could rest.  He'd done as much since she was a child.  It pleased him that the detritus of the sick room huddled in a corner, unused.  Oxygen in a tank.  Machines dozing, their cords wrapped and waiting.

She sat on a stool in front of her easel, brush in hand, facing into a dark triangle of darkness cut away by the fall of light from the bedside lamp.  She gazed into his Shadow world, just as he marveled at hers.  On the canvas before her, she painted a fairy-tale landscape: lush hills lit by star shine, a border of black forest, and the wide gray sea beyond.

Her heart hitched, and the veils between them thinned as her time drew near.  He both welcomed and braced against the sudden ache of her pain as it echoed through him--something of her to feel."