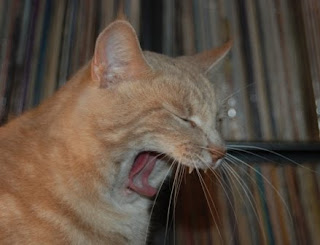 This is how we are all feeling today!
Yesterday our cub scout pack joined in on Creek Week which is an annual event doing an area wide creek clean up for the county.  Fortunately our designated park and creek clean up was close to the house.  After wards,  the sponsors hosted a barbecue, entertainment by Radio Disney along with some games and contests.   We had time enough to head home, shower and rest before heading off to the celebration.  We each received a t-shirt and hot dog lunch for our efforts, along with the thanks of many people.

The night before was the monthly pack meeting in which James den did a skit performing the itsy bitsy spider.   They tried doing it like the Bingo is my namo song, leaving out bits for each round.  James had a case of stage fright but managed to get through it.


Last week I unplugged and managed to write almost every day for about an hour. The story is progressing and I've come to the realization that I really don't have the time to write every single day.  As long as I make the time and manage to write 4 or 5 days out of the week, I'm happy with that.   I haven't typed up what I wrote yet for the past couple weeks, so have no idea of my word count, but averaging 2 to 4 pages a day which comes out to about 250 to 500 words a day.
The week was pretty full with finishing taxes, lessons, scout stuff, and my class on Nobel Literature.   For my class, I wrote a critical essay on an 1989 article "Ernest Hemingway:  The Life as Fiction and the Fiction as Life" in the American Literature Journal. The article is all about how readers and critics have confused Hemingway with his characters, think they represent him and how people need to learn to separate the author from the characters in the story.    I submitted the paper and for the first time in the history of taking classes through Excelsior, My Nobel Literature professor actually sent the paper back to me with sections highlighted and requested I rewrite portions of it.   I'll admit it was a bit a surprise but after all, it is a learning experience so I'll be diving back in and reworking it.    I suddenly realized how much it relates to the craft of writing, editing and rewriting your story until the novel is considered ready to be published.    My midterm is also this week which involves writing a couple essays as well.
Reading wise, in the last couple weeks I finished "Burn" by Ted Dekker, "Mr. Darcy Broke My Heart" by  Beth Pattillo and "People of the Book" by Geraldine Brooks.   I shelved "Across the Endless River" by Thad Carhart. I just can't get into it, so many another time.   I'm currently reading "The Lumby Lines" by Gail Fraser which is actually pretty good.    I broke my book buying ban and picked up "Outlander" by Diana Gabaldan, "The Reincarnationist" by M.J. Rose, and one of my guilty pleasure books  - Lora Leigh's Lion's Heat (part of the breed series).
Last but not least, the winner of Frank Delaney's Venetia Kelly's Traveling show is Bailey the book worm of The Reading Corner.   Congratulations to Bailey and I'll be emailing you shortly. 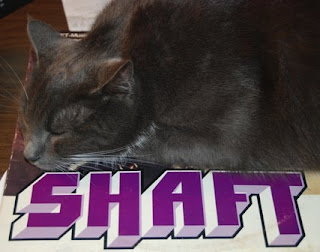 Herbie lying across Father's record album on his desk.  He has the right idea.  Have a restful, relaxing Sunday!
at April 18, 2010