Under the Dome by Stephen King 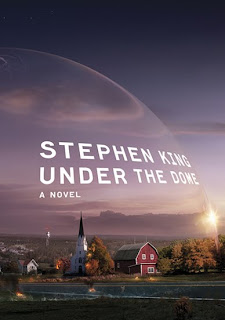 Under The Dome
By
Stephen King
** Caution:  Spoilers ahead **

Author Synopsis:   "On an entirely normal, beautiful fall day in Chester’s Mill, Maine, the town is inexplicably and suddenly sealed off from the rest of the world by an invisible force field. Planes crash into it and fall from the sky in flaming wreckage, a gardener’s hand is severed as “the dome” comes down on it, people running errands in the neighboring town are divided from their families, and cars explode on impact. No one can fathom what this barrier is, where it came from, and when—or if—it will go away.
Dale Barbara, Iraq vet and now a short-order cook, finds himself teamed with a few intrepid citizens—town newspaper owner Julia Shumway, a physician’s assistant at the hospital, a select-woman, and three brave kids. Against them stands Big Jim Rennie, a politician who will stop at nothing—even murder—to hold the reins of power, and his son, who is keeping a horrible secret in a dark pantry. But their main adversary is the Dome itself. Because time isn’t just short. It’s running out."

Under the Dome by Stephen King is a humongous 1074 page book about a town that is suddenly cut off from the rest of the world by a huge dome.   Who generated the dome?  Is it man made, did another country managed to come up with a new technology, is it a supernatural phenomenon or put there by beings from another planet?   And why Chester Mill's - a small New England town with really no one of major importance who lives there. No celebrities or congressman.  Just your typical small town of about 2000 people living their lives.  Except......
When this dome slams down around the town, several people die including the chief of police when he gets too close to the dome and the electrical current explodes his pacemaker.  The board of selectman (town leaders) take over and the leader, Big Jim Rennie is (surprise) corrupt and very dominating. Plus his son, Junior,  is slowly going crazy, murderously crazy.  Rennie enlists  his son and his friends to police the town.   The military chose military vet, Dale Barbie to take over the leadership of the town but they have no way to enforce it since they can't get in.   And Junior and his friends have it in for Barbie, no way are they going to listen to him.
It's been less than two days since the dome descended and people are dying. Kids are having mysterious seizures and folks are committing suicide.   Add in one crazy, drug addicted named chef who has holed up in the radio station, behind which is housed Big Jim Rennie and friends methamphetamine lab.   Big Jim and friend had also been borrowing everyone's propane tanks to run the lab.    People are running out of propane and getting suspicious of where it all disappeared too.   Big Jim decides it's time to shut the lab down because they can't ship it out and when the dome eventually disappears, the military will be all over the town.   However, Chef won't let then anywhere near it.
Meanwhile, the good guys - Barbie, some very observant teenagers, Julie who is the editor of the towns newspaper and a few others discover the source of the dome.  It's a weird box up near the edge of town.  When someone touches it, they see some weird looking aliens.  The  town is being observed, like ants in an ant farm by alien children who have no concept of what they are doing.  They are determined to destroy the box because the box is not only keeping them hostage inside the dome, but it is affecting everyone's emotions.   They don't want Rennie to find out because he is enjoying having control of the town and doesn't want to turn it over to anyone and will stop at nothing to keep control.
However, all Rennie cares about is getting control of the radio station and his meth lab.  So, when the military arranges a visiting day and all the town folk head to the edges of the dome to talk to their relatives who were locked out, when they were locked in, he and friends, armed to the teeth head out to confront Chef and turncoat selectman Andy.    A fire fight ensues and Chef blows up the propane tanks which blows up the meth lab.  Because the explosion doesn't have anywhere to go because it is confined by the dome, all the town people who are outside are incinerated, and most of the town is leveled.     Barbie, Julie and company need to find a way, fast to communicate with the aliens, to get them to let them out before they too die from the now toxic air.
Under The Dome is a whale of a story in which a town of 2000 is whittled down to 30 in a four day period.  It's a character study of what can happen when people are shut off from everything.   The bad guys are really bad, sinister, corrupt and perverse.  The good guys do the best with what they have in order to survive.    It isn't a story for the faint of heart. It has a bit of everything including murder, necrophilia, drug abuse, and rape.  Plus Big Jim Rennie and friends are all right wing fundamental Christians and slimy as all get out.     However, It is  a story that keeps you reading, because you want to know what is going to happen next.  And you keep reading and reading and reading, because the story is compelling.
I can't classify this story just as a horror story because it has all the elements of science fiction, supernatural,  thriller, and  suspense in it as well.  It's fast paced and the action never stops.  So if you like those types of stories or anything Stephen King, then I highly recommend it.
at March 10, 2010