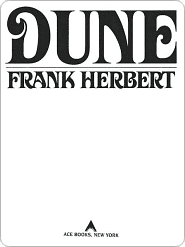 Amazon:  Arrakis is the sole source of Melange, the "spice of spices." Melange is necessary for interstellar travel and grants psychic powers and longevity, so whoever controls it wields great influence. The troubles begin when stewardship of Arrakis is transferred by the Emperor from the Harkonnen Noble House to House Atreides. The Harkonnens don't want to give up their privilege, though, and through sabotage and treachery they cast young Duke Paul Atreides out into the planet's harsh environment to die. There he falls in with the Fremen, a tribe of desert dwellers who become the basis of the army with which he will reclaim what's rightfully his. Paul Atreides, though, is far more than just a usurped duke. He might be the end product of a very long-term genetic experiment designed to breed a super human; he might be a messiah. His struggle is at the center of a nexus of powerful people and events, and the repercussions will be felt throughout the Imperium.

I first read Dune back in 1983 and read through the entire series when they first came out.   I recently read Dune again for the Take A Dare Challenge.    It was like reading it again for the very first time.  I remembered little except for the blue eyes of the Fremen and the gigantic worms.

The Duke Leto Atreides is ordered by the Emperor to the spice planet of Arrakis to take over the Spice Production from the Harkonnens.  However the Harkonnens do not willfully give up their lucrative position and plot against the Duke and his family.   Accompanying the Duke is his concubine Jessica and his son Paul, along with some trusted advisors and soldiers.  Jessica is a Bene Gesserit, an ancient order of women with powerful mental and physical abilities.  Usually women are the old ones trained in Bene Gesserit, but Jessica has trained Paul in the ways of the order.

The family is betrayed by a trusted adviser and Jessica and Paul are taken out into the desert to be killed.  They escape and find sanctuary with the Fremen, natives of the spice planet.  The Harkonnens and the Emperor don't think much of the Fremen and underestimate their role on the planet.   The desert is inhabited by huge spice worms and any vibration on the sand attracts their attention.  The Fremen have learned to use the worms to their advantage.   They believe Paul is the one prophesied to be their leader.

That's just the gist of the story of Dune.   The story is very convoluted and told from several different points of view.  It  is full of intrigue, political plotting, mystical elements and has many twists and turns.  Trusted advisers from both the Atriedes and Harkonnen factions are duplicitous in their dealings with both families.  Even the emperor is not to be trusted.

I enjoyed reading it and now want to watch the movie version again with Kyle McLaughlin, Sting and a whole cast of interesting characters. It's been years since I last seen it.

Dune tied for the Hugo Award best novel with And Call Me Conrad by Roger Zelazny in 1966 and also received a Nebula Award for Best Novel in 1965.

The official Dune Novels site has a new chronology including all the Dune books that have been written.

"But for me what really made it interesting was the way Dune called out to me from the deep corners of my memory. Somewhere in my consciousness the desert winds of Arrakis were alive and well, waiting patiently for the right time to envelop me. I imagine in ten years’ time they’ll be there again, buried deep within my memory, awaiting the call. What power some books have."

"Oh, this is just a great book. It's got tons of politics, intrigue, deception, treachery, battles, warriors, love and hate. It's got it all."

In the Shadow of Mt TBR:

"I found Herbert’s imagination amazing. In Dune, Herbert created a future that was virtually unimaginable at the time. He gave the world its own rules and specific history. And he gave them a religion that has a sense of being the eventual mingling of the major religions."