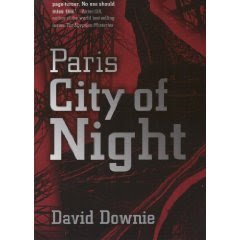 Back Cover: "June 18, 1850: The blurry image of escaping Nazi war criminal Adolf Eichmann wells up in a CIA darkroom in pre-dawn Paris.

December 28, 2007: As the countdown to New Year's Eve flashes from the top of the Eiffel Tower, vintage photographer and Daguerreotype expert Jay Grant, "son of a spook," races to piece together a deadly picture puzzle. Why were Madeleine and his father William murdered--and whose side is the CIA really on? Someone is trying to kill Jay before he can crack a code embedded on a set of Daguerreotype plates and flush out terrorists plotting to attack Paris. Pursuing Jay through the menacingly dark City of Light are a shadowy recycled Cold Warrior, a sexy Homeland Security officer, and his father William's age, fanatic former colleague, a man whose mission is no longer beating the Commies but battling radical Islam, even if it means destroying parts of the city he loves..

Do you know what a Daguerreotype plate is? Daguerreotype is an old photographic process named after Louis Daguerre, invented in the 1830's. A picture is made on a light sensitive silver coated metallic plate. The plates can't be exposed to light prior to processing or all will be lost. Jay's father made several plates with a secret code on them, hide them away for Jay to find and it's up to Jay to develop these plates and figure out the code. The CIA and Homeland security are trying to figure out the clues and stop a terrorist attack. However, Jay doesn't know whether to trust them or not. He is kept on the run, sleep deprived and his life at risk from all sides as he tries to figure out what is going on. The story is fascinating and takes you through the darker, seedier parts of Paris.

When David Downie emailed me asking if I would like to recieve a copy of his book, I was intrigued.

He wrote: "The title tells much: Paris isn't the sparkling City of Light, but rather the City of Night, with its own sinister allure. Diane Johnson has called the novel, "a wild ride through the dark side of Paris." It's a shadowy place full of fraudsters, forgers, murderers, Homeland Security operatives and aging Cold Warriors. My anti-hero is Jay Anthony Grant, aka JAG, a tough but sensitive type in midlife crisis. He's color-blind in one eye but in no other way resembles me (he rides a BMW motorcycle, wears fancy suits, and appears to be upwardly mobile). OK, you're right, the midlife crisis stuff we share.

So, close your eyes, flip open the cover, and imagine the son of a nasty old dead spook, a guy with serious issues about his father's past, on his way to his beloved fiancée and a vacation in Paris. The past draws JAG into what a slick publicist might call a tangled Parisian web of intrigue: an orange alert is on, New Year's looms in the form of a twinkling Eiffel Tower, and a bunch of fanatics on both sides of the terror/fundy divide are out to make JAG's life unpleasant. I'll say no more."

I'm glad I accepted his offer. Thank you to David for the opportunity to read and review Paris City of Night. It's fast paced, suspenseful, action packed and the characters will capture your attention. I highly recommend it. Check out David's website of more information about him.


Other thoughts about Paris City of Night:

"You know it's a good book when you finally come up for air and have that 'lost' feeling - like at the end of a really engrossing movie and the lights come back on- it's such a disappointment-you wish it could go on just a little longer-that's the way I felt about this book."

Gavin of Gavin's Book Log:
"David Downie, paints a vivid picture that sits well in your imagination. The tale itself is full of excitement - as a reader, you want to know what happens next, as the mysteries and intrigues keep building and building. "