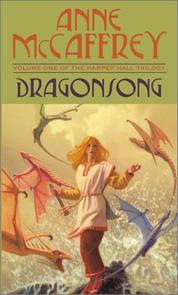 Happily, it's been years and years (ahem) since I've read these books, so reading Dragonsong was like reading it for the first time. Dragonsong is volume one in the Pern: Harper Hall Trilogy and the first edition published in 1976.

Description from The World of Anne McCaffrey's: "Menolly loved music and wanted to be a Harper, though her father would not allow it. It was a disgrace for a woman even to think of such a thing. Finally, he forbade Menolly to even sing for fear her ambition would become known. Menolly had no choice but to run away. On her journey she meets a group of fire lizards who bring new adventure, challenge and direction to her life."

Menolly is a teenage girl living on the Planet Pern in Half Circle Hold. She's very talented musically, and wants to be a professional Harper. She is forbidden by her father to be a Harper or sing anything other that prescribed songs. The old Harper dies and since she is the only one with musical talent, allowed to teach the hold children how to sing ballads. However, if she makes up any tunes or sings anything other than what's allowed, she is punished. When Elgion, the new Harper finally arrives, her parents won't allow anyone to reveal who had been teaching the children. She runs away and manages to impress nine fire dragons.

However, prior to the Harper's death, he had sent two of her songs to the Master Harper Robinton. Elgion is under orders to find the person who wrote the songs. When he can't find any "lad" with musical talent in the hold, he is told the "lad" left to go to another hold. While Menolly is living in the caves, Thread Fall comes and she is rescued by a Dragon rider and taken to another hold. There she is accepted and encouraged to write her music and sing. While she in the other hold, Elgion visits along with Master Robinton. They hear her singing and the fire dragons humming along. The Harpers are ecstatic to have found the writer of the songs.

I read many of Anne McCaffrey's books back in the day. Looks like I'll be revisiting the rest of the trilogy and then some in the coming days.